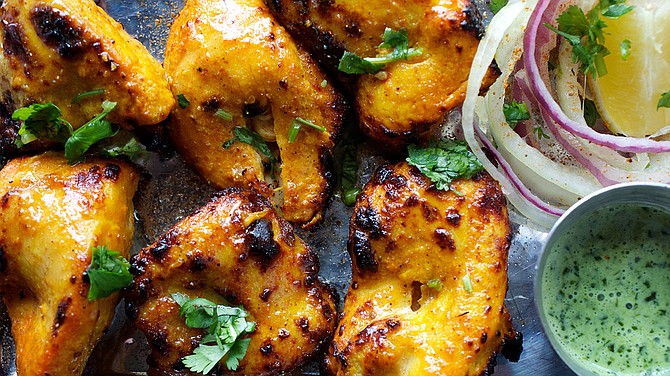 At the Punjabi by Nature Vienna location, the menu beckons with its lengthy offerings. Photo contributed

Launching an empire of compelling Indian dishes, Rajiv Chopra, managing director and overseer of the menu of Punjabi by Nature, deserves a culinary gold medal or two. His three eateries — in Leesburg, Chantilly, and Vienna near the Mosaic District — may be diminutive and humble, but those three kitchens assemble the best Indian cuisine in the metro area. Truly.

Although Chopra is more manager than daily chef, this New Delhi native worked in restaurants there for 20 years. “I took no culinary courses,” he said. “I just worked in the kitchen.”

He also attributes his culinary skills to his mother. “I learned from my Mom in New Delhi,” he said. “Now she tells me which of my recipes to use. And I do that.”

Chopra added that he also relies on the partnership with his wife, Shivani Chopra. “She believes in me and inspires me to do all this,” he said. “And on the other hand, she helps me a lot, too. Without her help, this would not be possible for me.”

Where to start? At the Vienna location, the menu beckons with its lengthy offerings. To start, no one should skip the choley bhature, the puffed-up wheat bread that looks like a golden balloon and comes with a ramekin filled with a traditional chickpea spread, which is dark and richly flavored — unlike anything served in area Indian restaurants. A second bread appetizer with the same chickpea spread calls for a kulcha, a flat bread.

The balance of the menu extends what must be through every cultural take of New Delhi cuisine: butter chicken, lamb seekh kabab, tandoori chicken, grilled lamb chops and lamb curry, and four different styles of the famous Indian rice specialty, the biryani. Of course, the kitchen also sends out spectacular Indian breads, from onion kulcha and garlic naan to a house special: the chef’s unique chocolate naan. Chocolate naan, you may wonder. Eating this is like dipping into a sweet/savory dessert treat.

Desserts are limited to a few choices: gulab jamun/rasmalai and faluda kulfi, a traditional Indian frozen dessert. And, pointed out Chopra, patrons have a selection of cocktails and wine, plus his mixologist turns out some dazzling margaritas.

These listed dishes are only a handful of what patrons can delve into at this restaurant. To get the full scope of what Chopra and his chefs turn out would require perhaps 25 return trips. Fortunately for those who live elsewhere in Northern Virginia, Chopra has a Lansdowne and a Chantilly location, the latter in the back of the Lotte market in Metrotech Plaza. He did hint that he has other openings in mind, and Indian food fans can hope that the next Punjabi by Nature will be just down the street.