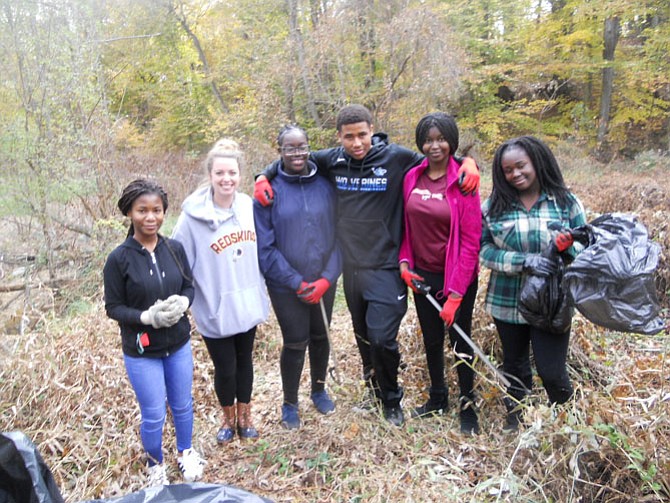 Student members from the Liberty's Promise club at West Potomac High School and their faculty sponsor teamed up with 10 residents of the Spring Bank community at 10 a.m. on Nov.18 and by noon all visible trash in the stream that is on Fairfax County owned land was removed from three sections of Quander Brook.

Liberty's Promise is a nonprofit that works with young immigrants while encouraging them to be active and conscientious American citizens. Liberty's Promise runs after-school programs at West Potomac High School where youth participate in service activities, learn about different college and scholarship opportunities, write resumes and practice interviews, take field trips, and hear from guest speakers.

Recently they heard from Wendy Cohen, a speaker representing Clean Fairfax about the issue of trash in our local streams and watersheds. Cohen suggested that they join up with the Spring Bank Community Association in the same neighborhood where West Potomac is located and join them during the semi annual stream cleanup to remove trash that enters Quander Brook from storm water drains in the Kings Crossing Shopping Center.

McKenzie Williams the club sponsor described her students as incredibly motivated. She described the experience as a great way for the students to give back to their community and as being very eye-opening about the environmental challenges facing nearby watersheds. Participating in such efforts gives students and residents alike a heightened awareness of personal responsibility in the handling of trash and wastes in the community business and shopping centers.