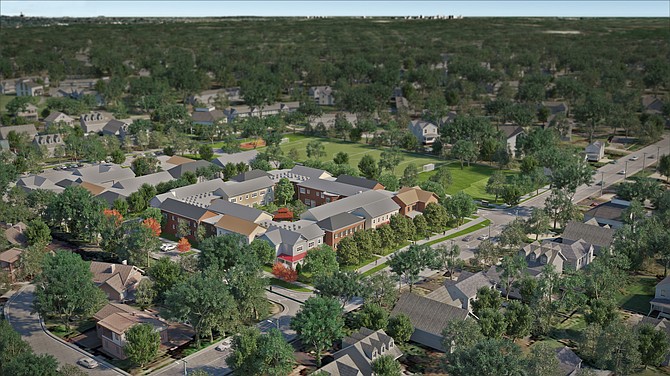 This rendering shows what the exterior of the Lewinsville Senior Center, Adult Day Health Center and Childcare Center will look like.

A courtyard is planned for the center of the residences, which is named the Fallstead at Lewinsville.

The Lewinsville Adult Day Health Center, which is currently located in Suite 50 at 7700 Leesburg Pike in Falls Church, is in need of volunteers:

Those interested in volunteering can register and apply online with Fairfax County’s Volunteer Solutions at http://www.fairfa...">www.fairfaxcounty... or by calling 703-324-5406, or e-mailing VolunteerSolution....

A large project is underway to renovate and increase the capacity for serving McLean’s growing senior population: The Lewinsville Community Center. The renovated site will house a public community center as well as a private independent living facility.

“In a way, there are four different functions in this old building,” said Hossein Malayeri, deputy director of real estate, finance and development for the Fairfax County Department of Housing and Community Development. “The scope of work basically is to demolish the existing facility and design and build two separate buildings.”

When completed, the Lewinsville Community Center Campus will include 82 independent living residences called the Fallstead, which will add capacity in McLean to accommodate the wave of anticipated retirements, often called the “Silver Tsunami,” as the baby-boom generation, or those born between 1946 and 1964, exit the workforce.

There are 9,003 people living in McLean who are 65 and over, or nearly 19 percent of the total population, according to data from the 2015 American Community Survey by the U.S. Census Bureau. It is anticipated to continue growing.

The project will also add capacity for affordable housing for McLean seniors, who face a median gross rent of $2,771, according to the Census Bureau.

The 2017 Virginia AMI is $80,800, according to the U.S. Department of Housing and Urban Development. Here are the costs for living at the Fallstead under 2017 AMI, according to Kamilah McAfee, director of real estate development for the Wesley Housing Development Corporation, which is developing the residential units on the site:

“This is our mission,” McAfee said. “We’re a nonprofit, affordable housing developer specializing in higher-need populations. We have a lot of special needs projects and senior projects in our portfolio, as well as family housing. Typically, anything below 60 percent AMI is our traditional target, but the reality is that we have households at on average 35 percent of the area median income in our properties.”

There will also be common areas within the residences, including a library, TV room, fitness center, business center with computers and a multipurpose community room with a kitchenette, according to McAfee.

The community room will be the primary location for activities and programming, which Wesley Housing secured grant funding from the Fairfax County Consolidated Community Funding Pool to help finance human services for the occupants.

“As everybody knows, one of the greatest concerns with seniors is not only making sure they’re living in a safe and affordable environment, but also to make sure that we prevent anything that may cause isolation,” Kathy Mejasich, a spokesperson for Wesley Housing, said. “With our resident services programming, we are committed to doing that and truly building and being a part of the community.”

On the public facility side, the Senior Center will be expanded and increase participant capacity from 50 to 80. The Adult Day Center will be expanded so that its capacity will double from 40 to 80 participants. The two child day care centers — the Lewinsville Montessori School and Westgate Child Care Center — will continue to accommodate 210 children but in a larger space. The youth playing field will be increased to a regulation size Under-13 field. It will be a natural grass field, according to Malayeri.

Not Closed During Construction

Until the work is complete, the county relocated all of the programs.

The Lewinsville Montessori School and Westgate Child Care Center remain on site, but have been relocated to temporary cottages in the former soccer field location, according to Malayeri.

“Basically, on Friday when the kids went home, their furniture and everything were moved over the weekend and on Monday, the kids went to the new temporary facilities,” Malayeri said.

“Once they were moved, the building was demolished,” Malayeri said.

As of Aug. 1, 2016, the temporary location for the Senior Center activities were relocated to the Lewinsville Retirement Residences at 1515 Great Falls St. in McLean. The Adult Day Care Center was relocated to Suite 50 at 7700 Leesburg Pike in Falls Church.

“There were 22 existing residents there previously in largely studio apartments,” McAfee said. “We’re putting 82 one- and two-bedroom apartments that those residents would have first rights to.”

The 22 existing residents would also have the option to return under the same Fairfax County Department of Housing and Community Development Housing Choice Voucher rental subsidy program, formerly known as the Section 8 Program, that they were participants of before redevelopment began, according to McAfee.

New Formula to Meet the Need for Senior Housing

The site of the Lewinsville Senior Center has a rich history of community activity. The 8.66-acre property at one time housed an elementary school, originally constructed in 1961. In 1994, the county approved a special exception permit that allowed a 22-bed independent living facility, a senior center providing activities for up to 50 adults, an adult day care center for up to 40 adults, child care for up to 210 children and an athletic area with a rectangular field and a diamond.

Its latest plans have been long in the making, particularly because of its challenges.

Local officials broke ground for the work in September 2016, but the process began back in 2004.

In 2004, the county approved another special exception amendment which would have maintained the existing uses and added an 82-unit assisted living facility. However, in 2008, the project to renovate and expand the facility stalled.

During this time, it became apparent that the cost to construct and operate an assisted living facility would be excessive.

“I knew that it was a great project that was planned and approved, so I basically inquired why it hadn’t moved; and the bottom line was it couldn’t be funded the way it was programmed and planned,” Foust said. “In the end, it just wasn’t working out. The numbers weren’t penciling out.”

A new funding model was examined and approved. In 2012, the county elected to pursue an independent living senior residential model under a public-private partnership that could be constructed and operated under a 99-year ground lease with the county.

“This is very unique, but it has provided us, I think, an example of how to move forward; the county working with these nonprofits can be a very successful formula for delivering low-income housing for seniors,” Foust said.

The county remains in control while relying on private investment.

“The underlying ownership of the land still is going to stay as the county because we want to make sure the affordable housing stays there,” Malayeri said. “It’s going to be under a 99-year, long-term lease with [the developer] with almost no cost [to the county] basically.”

This approach is guided by Virginia’s Public-Private Education and Infrastructure Act, which enables public bodies in the commonwealth to partner with private entities to develop and/or operate projects for public use.

“This was a prime site and we figured it was underutilized and we had an opportunity to team up with the private sector and a private developer,” Malayeri said. “Not only are these units old and require huge amounts of financing and renovation, but also; we needed to increase the capacity.”

Under the PPEA, the county will build the approximately $18 million public facility, which includes the Adult Day Care Center, the Senior Center and the two child day care centers.

“That is the responsibility of the county in terms of the design, construction, financing, operations and everything,” Malayeri said.

For the private side, the Board of Supervisors approved an interim agreement on July 29, 2014, with Wesley Hamel Lewinsville LLC that allowed the Wesley Housing and Hamel Builders to begin making plans for the residential facility.

Under the agreement, the developer is responsible for the development, financing and operation of the residences, according to Malayeri.

For its participation in the agreement, the developer applied and received a federal income tax credit through the federal Low-Income Housing Tax Credit program with the U.S. Treasury Department and the Virginia Housing Development Authority.

“It’s a good project and really one of my favorite things since I’ve been on the board that I’ve been able to accomplish,” Foust said. “It’s creative with the public-private partnership and really meeting a significant need in the community in a very attractive way that’s compatible with the neighborhood.”

However, the private plan faced pushback from the McLean Citizens Association, which provides a community forum on land-use and development cases in the community and has been a driving force in quashing development proposals that are unpopular with residents.

When Wesley Housing, the developer of the residential facility, began public outreach and engaged with adjacent neighbors and homeowner associations, it received several points of contention from the MCA.

In February 2015, the association officially opposed the development. The MCA’s concerns, which were outlined in a “Lewinsville Senior Center Expansion Special Exception Amendment” resolution, were about stormwater management, traffic and parking.

To alleviate the MCA’s concerns, the development’s plans were updated to include stormwater management features that will reduce the current site’s outflow into nearby Saucy Branch Creek.

“Addressing that issue was done in a way; it’s a combined underground system and a dry pond that’s above grade on Great Falls Street,” McAffee said.

“Both of those were absolutely addressed,” McAfee said. “Yes, there is a left turn lane into the property now that didn’t exist prior. So, we’re dedicating a portion of the private property that runs the length of the frontage to accommodate an additional lane so now you don’t have traffic queueing up as people are trying to turn into the site.”

The developer also agreed to provide more parking spaces than required by zoning regulations. There will be 162 parking spaces — 52 for residents and 110 for other users, according to McAfee.

The MCA still has not given its formal approval to the project.

The citizens association’s stance on the development is inconsequential at this point because the Board of Supervisors unanimously approved the special exception application for the new facility on March 3, 2015.

But Wesley Housing has been in contact with the association and has had in-person meetings with members of its board.

“[MCA President Dale Stein] seemed very supportive of our new community and did not mention any of the now-resolved issues,” Mejasich said over email.

Wesley Housing sent an email to the MCA Planning and Zoning Committee saying it would be “happy to meet with the MCA to discuss the project,” Mejasich said over email.