Room of Restonians: 'We Don’t Want This'
Votes

Room of Restonians: 'We Don’t Want This' 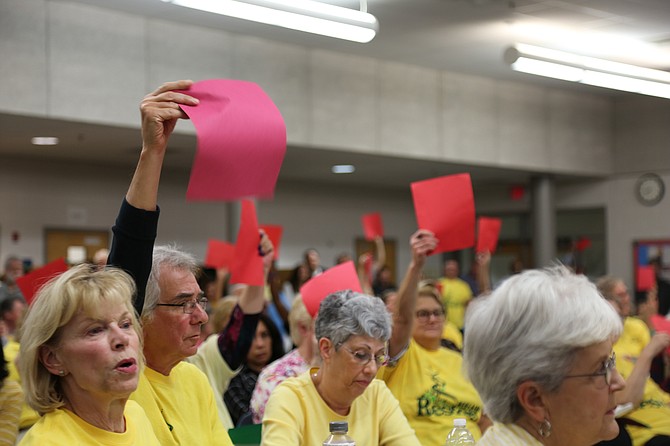 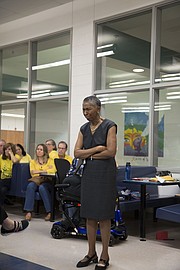 Hunter Mill District Supervisor Catherine Hudgins literally cringes as people shout at her as she tries to close the meeting with remarks.

raise the density of Reston in its tracks.

“We don’t want this!” “Referendum!” “Moratorium!” the majority white and baby-boom aged crowd shouted as county officials tried to justify their proposal.

The Fairfax County Department of Planning and Zoning-proposed amendment would alter the zoning regulations by changing the density cap in Reston for areas that are zoned Planned Residential Community (PRC) District. The current cap for these areas, which the majority of Reston is zoned, is set to an average of 13 people per acre. The DPZ is recommending raising the cap to an average of 16 people per acre.

MORE THAN 700 PEOPLE stuffed into the South Lakes High

“I planned to move to Reston when I was younger; I just couldn’t afford it,” this woman, a homeowner who moved to Reston from Texas “for the green space,” said during the meeting. “Now that I’m older, I can afford it.” “I look at you, and I’m really disappointed,” she directed at Hunter Mill District Supervisor Catherine Hudgins. “I’m just disappointed in your leadership, because you should have been looking at the residents of Reston first, before you looked at developers,” she added.

School cafeteria to voice their frustrations. Doors were closed at 6:50 p.m. for the 7 o’clock meeting, with county staff directing those who couldn’t fit to sit in a lecture hall down the hall, which was designated as an overflow room where the meeting was live-streamed on a large projector screen. The overflow room could hold a capacity of 169 people. The meeting was also live-streamed on Fairfax County Government Television Channel 16.

The DPZ has billed the proposed zoning ordinance amendment as a regulatory change that would support the future implementation of the Reston Master Plan over a time frame of the next 40 years.

“This isn’t a new thing that has suddenly become needed,” DPZ Deputy Zoning Administrator Cathy Belgin said during the meeting. “The need has been something that staff has anticipated for over 10 years now, even prior to the comprehensive plan being amended in anticipation of metro.

“What we’re proposing with this amendment is not a rezoning,” she added. “It would not change the zoning designation of any properties in Reston and it would not approve any new dwellings. It’s not a proposal to add the dwellings

Jody Chiaro of Reston holds up a green sign and was moved to stand when someone from the crowd asked the panel to halt the process and forgo introducing the amendment to the Fairfax County Planning Commission and Board of Supervisors.

or the people that you may have heard about. Any proposed development going forward is still subject to the standard development review process. This wouldn’t change any of that.”

As she spoke, rumblings began to rise from the crowd.

“I do see your feedback; thank you for that,” Belgin said as the crowd flashed red signs at her to visually show their disapproval.

However, county officials say that the only areas planned to take advantage of

Fairfax County Department of Planning and Zoning Hunter Mill Division Branch Chief William Mayland told the crowd that there are development applications under review that would push Reston over its current density cap, which confirmed opponents’ fears that the amendment is developer driven.

Opponents are convinced that the amendment is developer driven and not in the best interest of current residents.

Fred Selden, director of the Fairfax County Department of Planning, told the crowd that the late Robert Simon Jr., a New York real estate developer who founded Reston, would have been a proponent of the amendment. “One of the biggest proponents of [increased density] was Robert Simon himself, who said that the village centers really lacked a sense of cohesion. He thought that Lake Anne was really the only village center that tried to function and emulated kind of what he wanted to have happen at the village centers.”

According to Mayland, the three proposed applications that would push Reston past the 13 cap are:

1) The Greenblum and Bernstein property at 1941 Roland Clarke Place, which is proposing to build a mixed-use development with 699 residential units;

2) A Boston Properties’ parcel called the Reston Gateway located between the W&OD Trail and Sunset Hills Road, which is proposing to build a mixed-use office, residential, hotel and retail space with 1,710 residential units; and

The meeting was previously scheduled for Monday, Sept. 25, at Lake Anne Elementary School, but was halted as the cafeteria became overcrowded. The capacity for the room set by the Fire Marshal Code is 210 people, and there were 313 people who signed into the meeting on sheets provided at the door. However, there were many more people waiting outside who couldn’t get in. More people also avoided the lines to sign in, which made the crowd closer to 400 or 500 in size.

County officials have been met with significant pushback from Restonians during the original three community meetings about the amendment earlier this summer on May 3 and May 15 at the North County Governmental Center and May 24 at Lake Anne Elementary School. The meetings have all been consistent in that the tone from community members who attend the meetings have been of frustration and anger.

The discontent of the engaged citizens has only grown as they feel like they are continually being ignored.

Representatives from the Reston Citizens Association, Reclaim Reston, Rescue Reston and the Reston 20/20 Committee have been leading the resistance to the amendment, organizing community members to action. The group held a forum on Sept. 20 where presentations were given to a standing-room-only crowd about why they should join in opposing the amendment.

Board members of the Reston Association have also made personal statements about their concern or outright disapproval to the amendment. The board will discuss the matter at its next meeting this Thursday and will be voting on a formal position.

In the meantime, Reclaim Reston posted a “Reston Zoning Moratorium Petition” online on iPetitions that has gotten more than 1,200 signatures and more than 500 comments.

“[The group’s] goal is to work with the county to put together a new, more reasonable proposal generated after careful study of its impacts on the community and linked concretely—including funding—to concurrent infrastructure development,” Terry Maynard, co-chair of the Reston 20/20 Committee said in an email.

In anticipation of the meeting, the group organized a “Call Cathy Day” on Friday, Oct. 20, encouraging people to flood their supervisor’s office with calls about their “concerns about the county’s plant to raise the cap on Reston’s zoning density.”

“We’ve gotten lots of questions,” Hunter Mill District Supervisor Catherine Hudgins said at the beginning of the meeting. “We thank you for your phone calls, for your emails and for your letters.”

While Hudgins agreed that there is an infrastructure challenge and congestion problem with traffic, she seemed unmoved in voting against increased density. Community members demanded to know if she would vote against the proposal.

“I tell you … some of what I hear chills me,” Hudgins said in closing remarks.

Reston was planned for economic diversity, but Hudgins argued that it has become unwelcoming for the “breadth of people that have been here for so long.”

PEOPLE IN THE CROWD shouted that the developments allowed from the density increase would not offer opportunity for affordable housing, rather more high-priced, luxury apartments and condominiums.

She agreed that more affordable housing is needed, but said Reston has to “keep up with the numbers in some way to benefit some of that development.”

“Can we make it what Reston is supposed to be?” she asked the crowd.

Those in the room were fired up to petition the other members of the Board of Supervisors in order to halt the process and potentially reopen the comprehensive planning process to solidify their position of stopping growth in the community. They also expressed irritation that their representative on the board ignored their plea to quash the amendment, alleging that Hudgins had already “dug her heels in.”