Are Lines of Understanding Replacing Battleground Lines in Reston?
Votes

Are Lines of Understanding Replacing Battleground Lines in Reston? 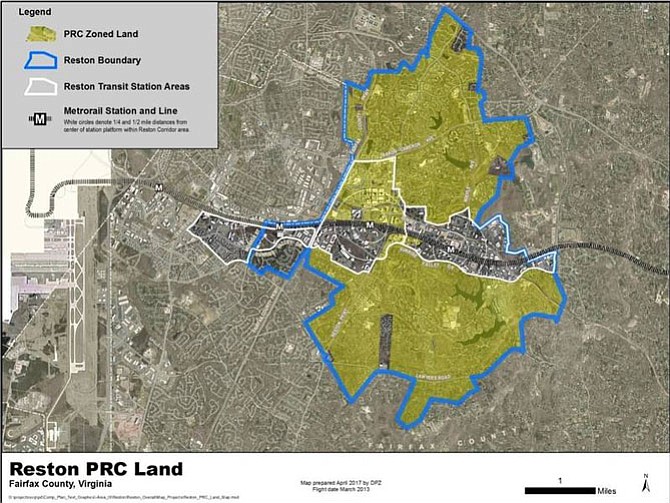 The map by the Department of Planning and Zoning shows Reston Boundary, Reston Transit Station Area, and the PRC Zoned Land.

Over the past few months, battle lines had been drawn in Reston as challengers and proponents of the proposed Planned Residential Community (PRC) Zoning Ordinance faced off and the clock ticked down toward a Board of Supervisor Meeting to calendar the item.

Under discussion is a proposed amendment by the Fairfax County Department of Planning and Zoning (DPZ) to raise the overall allowable density in the Reston PRC from 13 persons per acre to 16 persons per acre.

The plan also proposes to eliminate the existing “high density” cap in areas of the Reston PRC. The restriction is currently set at 50 dwelling units (DUs) per acre. DPZ is recommending raising it to a range of 70-75. DPZ described the ordinance amendment as a regulatory change.

According to the "Proposed Zoning Ordinance Amendment Residential Density in the Reston PRC District Fairfax County Department of Planning and Zoning" dated May 11, 2017, there are 74,192 people in Reston’s PRC zoned land equating to 11.88 people per acre. Given the 13 person per acre average maximum, the population could grow to 81,195. Given a 16 person per acre cap, the population of the PRC zone could expand to 99,932.

The document states: “The existing Zoning Ordinance limitations have supported implementation of the Reston Master Plan from its inception in 1962 with minor changes through 2015. However, the 13 persons per acre limitation cannot support the amended Master Plan.”

AN ESTIMATED 900 people attended a community meeting on Oct. 23, 2017, at South Lakes High School about the proposed controversial Planned Residential Community (PRC) Zoning Ordinance. This meeting had been rescheduled from a few weeks earlier because the previous location could not accommodate the crowd who came to speak concerning the amendment.

At the October meeting, boos from the crowd elicited when county officials were defending the proposed zoning amendment. County officials met with similar frustration at three earlier community meetings. Opponents to the plan believe it to be developer driven.

Since then, headway and offers to review and assess recommendations have occurred.

In a rundown of the recent events, Hunter Mill District Supervisor Cathy Hudgins (D) met with members of the Coalition for a Planned Reston (CPR) at their request on Jan. 24, 2018. The purpose of the meeting was to commence discussions of CPR's proposed possible areas of amendment to the Reston Master Plan, instead of moving forward with the proposed Planned Residential Community (PRC) Zoning Ordinance.

On Feb. 5, CPR sent a letter to Hudgins regarding the amendment. In it, CPR stated their appreciation to Hudgins for her willingness to meet with CPR and Reston Association on Jan. 24. Continuing, they shared with Hudgins that they consulted "widely in the community and with legal experts and planning and zoning."

CPR stated in their letter: "We have identified a number of areas where the Reston Master Plan can be amended to better serve our community. These amendments obviate the need to increase the density of Reston's Planned Residential Community area."

The letter goes on to state, "These areas are Affordable Housing, Land Use and Residential Land Use Categories, Guidelines for Village Center Redevelopment; Implementation — Monitoring, Regulation, Partnerships, and Phasing; Phasing Transportation and Public Facilities Development; Parks, Recreation, and Cultural Facilities; Reston Neighborhoods; and Mapped Road Across Hidden Creek Country Club." CPR attached their findings to the letter and asked Hudgins to instruct the appropriate County officials to meet with them for review.

CPR also asked Hudgins in the letter to "...defer any further action on the PRC until this review is completed and cancel the planned vote on March 6th."

On Tuesday, Feb. 13, 2017, Hudgins, County representatives, and members of Fairfax County Planning and Zoning met again with CPR. They agreed to push back the authorization on the Board of Supervisors calendar to hear the density amendment previously proposed to be presented March 6 to March 20 instead, pausing the initial step in the legislative clock.

Bruce Ramo, a member of Reclaim Reston, a local group opposed to the zoning ordinance change, said, "We told Supervisor Hudgins, once it is on the calendar it will gather momentum and be passed."

THREE STEPS ARE NEEDED for moving forward for approval of the Planned Residential Community (PRC) Zoning Ordinance: Step One – calendar authorization at the Board of Supervisors Meeting; Step Two – review by Planning and Zoning; and Step Three – Final Vote.

Ramo said one of the group's concerns is that before growth, infrastructure needs to be in place.

"We recognize there will be growth,” Ramo said. "We are very anxious for there to be a better means of ensuring the infrastructure is in place with the growth. We have made a variety of recommendations to amend the Reston Master Plan; among those things, we'd put a population cap that is approximately double the current population of all of Reston."

Reached for comment, Hudgins said, "I look forward in the Hunter Mill Office to continue the dialog on the proposed Planned Residential Community Zoning Ordinance Amendment and I am hopeful we can work together to find a path forward that respects the adopted plan for Reston and the current concerns of the community.”