Final budget to be presented to County Board of Supervisors for approval. 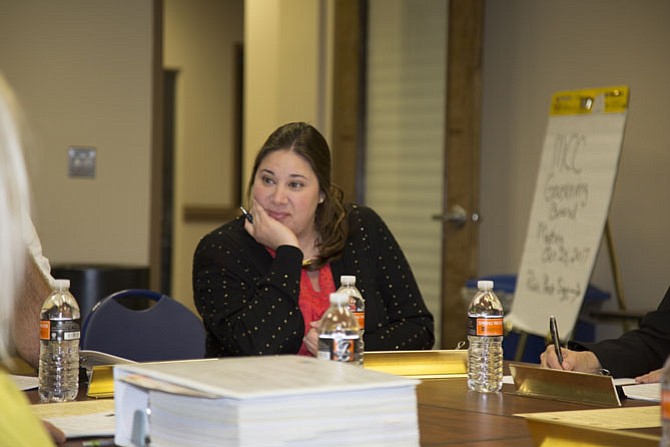 McLean Community Center Governing Board Chair Laurelie Wallace listens to discussion on the budget before leading the members in a vote to approve. Photo by Fallon Forbush.

The McLean Community Center’s 11-member Governing Board voted to approve the center’s proposed fiscal year 2019 budget on Wednesday evening, Oct. 25, from its temporary location in the McLean Square Shopping Center.

It was a unanimous vote of support from the eight governing board members who attended the meeting. The three absent members who did not cast a vote were Jennifer Rossman, Caroline Brunner and Alexander Camus.

“This is not a final budget,” Paul Kohlenberger, governing board vice chair, said. “It has received preliminary approval.”

The final budget will be presented to the Fairfax County Board of Supervisors for approval in spring 2018.

The fiscal year, which runs from July 1, 2018, to June 30, 2019, is projected to yield a budget surplus while construction is finished on the renovation of the new center. The proposed budget projects $5.7 million in revenue and $5.6 million in expenses, resulting in a projected surplus of $102,069. This is in comparison to a projected $133,934 surplus for the current fiscal year 2018 budget.

“When we started, we had sort of a shortfall and we went back and looked at it and we made adjustments to real estate taxes, to personnel, to expenses; and then we came up with a surplus of $102,000,” Ashok Karra, comptroller for the MCC, said last month during deliberation of the budget.

This would be accomplished without changing the tax rate for the Small District One A-Dranesville, which supports the center by taxing homeowners 2.3 cents per $100 of assessed property value.

“Our recommendation right now is we don’t increase the tax rate,” Karra said.

One reason for the budget surplus is that there are no expenses associated with the renovation of the center or other capital projects proposed in fiscal year 2019, according to Karra.

“That is the biggest part of our expenses,” he said.

All renovation and capital project expenses for the new center were expensed in the fiscal year 2018 budget: $6,975,484 for the renovation and $86,365 for other projects.

To soften the brunt of the costs to operate the center’s programs and classes from temporary locations — the Langley Shopping Center for dance programs, the McLean Square Shopping Center for classes and administrative offices and the Lewinsville Park House for special events and performing arts administration offices — expenses were spread out between multiple fiscal years: $142,365 in 2017; $439,897 in 2018; and $211,283 proposed in 2019.

Staff members found a way to create a small revenue stream out of the burden.

“When classes are obviously not having or conducting classes, we are putting it out for rentals,” MCC Executive Director George Sachs said last month during deliberation.

They are available when classes or governing board meetings are not occurring from Monday through Friday from 9 a.m. to 11 p.m. and on Saturdays from 9 a.m. to 5 p.m. Interested individuals can fill out a “Preliminary Booking Form” to inquire about renting a meeting room online at www.mcleancenter.org/rentals.

The proposed budget projects $62,425 in revenue from the rentals.

There are no proposals to change staffing levels for the center. Sachs initially proposed to add one new full-time position to support the center’s Public Information Office.

“In order to help balance our FY 2019 operating budget, it was decided to defer the addition of this new position to the next fiscal year, FY 2020,” Sachs said via email. “This proposed option saved us about $60,000 in our overall operating budget for FY 2019.”

Operating expenses represent the costs to operate the MCC during a fiscal year, including facility maintenance, utilities, instructor fees, theatre productions and expenses associated with events like the Independence Day fireworks and McLean Day. Personnel expenses include salary compensation, taxes and benefits, such as health, retirement and workman’s compensation.

“Keep in mind that we are six months out, six months in,” Karra said of operating the MCC from the renovated site when it reopens. “That makes a big impact on how we are going to actually do the budget.”

Like in 2017, the 2018 Independence Day fireworks event on July 4 will likely be held at the Churchill Road Elementary School again since its regular location at Langley High School will be unavailable. Areas of the high school are under construction and will continue to be until the renovation project is completed.

“Unfortunately, they’re just not close to that; they’re about a year behind,” Sachs said. “If everything continues well, the following year, we hope to be at Langley High,” he added.

“We are not doing [the Gingerbread House] because anything that is happening prior to January of FY ‘19 will not be conducted because they happen outside of the center,” Karra said.

However, an exception will be made for the center’s Breakfast with Santa event, according to Karra.

Enrollment for MCC’s Summer Camp and events at the Old Firehouse Teen Center, which have a budget of $268,000, is expected to increase by using larger buses to transport participants to the venue.

However, revenue from the MCC’s Visual Arts program, which has a budget of $20,000 to sponsor Artfest, which is put on by the McLean Project for the Arts, is expected to be lower than the current year because of the center’s construction.

At the MCC Governing Board Finance Committee Meeting of the Whole, which was held on Tuesday, Sept. 12, MCC Governing Board Treasurer Merrily Pierce and the full board worked on finalizing the fiscal year 2019 budget. Each board committee evaluated MCC departmental budget proposals on continuing and new programs, as well as the facilities and management of the center. The work on departmental and consolidated budget proposals included a review of fiscal year 2017 year-end actuals, the current year’s budget and new proposals for fiscal year 2019.