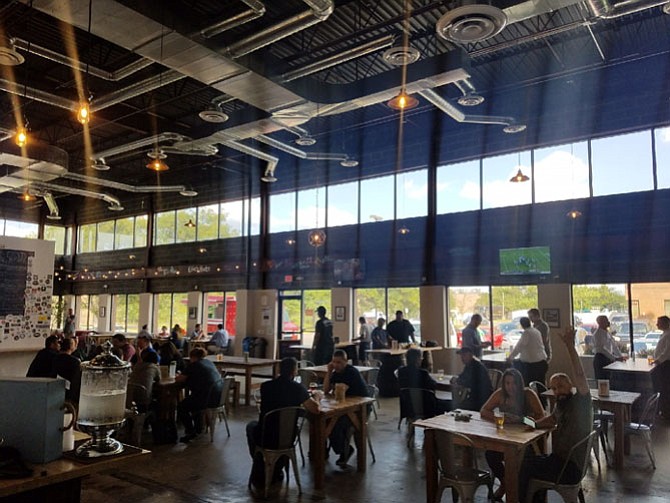 The Fairfax County Brewfest will be held Saturday, Sept. 16, from noon to 6 p.m. at Mustang Sally Brewing Company in Chantilly.

"We wanted to make this a great party. We're going to have bands and food trucks. We wanted to do it at a working production brewery so this will be an indoor/outdoor fest, and we're going to close the parking lot and set up a stage and have two different bands that play all day long. The focus will be to make it fun," said Sean Hunt, founder/owner of Mustang Sally in Chantilly.

Hunt spent his last two years in high school in Germany where brewfests are extremely popular. "That's what this is intended to be," he said. "It's when people can hang out in a casual, fun environment and really celebrate what the county has available in terms of breweries and just a celebration in their community ... It's just an event that the community comes together for. It's absolutely what we're trying to accomplish here."

He continued: "We'll have two production breweries — Mustang Sally Brewing Company and Fair Winds Brewing Company. We'll have smaller breweries, where they're brewing a few kegs at a time — Lake Anne Brewhouse and Aslin Brewing. And there are breweries in the middle. We'll have a new brewery called Ono Brewing Company; it's a Hawaiian-based theme. We also have Forge Brew Works; it's kind of a smaller brewery that caters to more of a tasting-room atmosphere; they have a focus in Belgian beers, and also Caboose Brewing Company. It's kind of a neat mix. Within the last two years we've been able to get these breweries opened." He said the first brewery opened four years ago and the other breweries opened in the last two years in Fairfax County.

The Brewfest will feature live music from Scott Kurt and Memphis 59 and The Blues Buckets as well as brewery tours and food vendors. Wild Mustang Club cars will also be on display. Children 12 and under are admitted for free. A portion of the proceeds will benefit K9 for Warriors, which will be bringing several service dogs to the event, and VAVets.

John P. Boylan, president and CEO of the Dulles Regional Chamber of Commerce, said the chamber’s goals are always focused on three areas: Commerce, Community, and Communication. “Brewfest will enable us to do all three starting with the community as we help two great organizations — K-9 for Warriors and VAVets. They will be in attendance and we hope folks will come by to support them and say thank you,” said Boylan.

He continued: “We will showcase the brews from all of the Fairfax County breweries, some of the best on the East Coast. Not only that, we have several food trucks and bands to keep the energy up.”

"We're not expecting thousands. We're hoping to fill the place up,” said Hunt. “The county, the Chamber of Commerce, and all of the breweries are all coming together to support this. From that perspective, we'll see a lot of coordinated activity that wants to make this a centerpiece event ... We get a lot of people from Chantilly, Reston and Centreville."

The indoor/outdoor event will take place at Mustang Sally Brewing Company, 14140 Parke Long Ct., A-C, Chantilly, near the intersection of Routes 28 and 50. The cost is $10 pre-sale; $15 at the door, which includes admission and logo tasting glass. Cost of the beers is additional. For registration, visit the website at www.msbrewing.com (under FFX Brewfest).

Launched in 2016, Mustang Sally Brewing Co. is an independent production of craft brewery distributed in draft and package throughout the Northern Virginia area. Find out more at: www.msbrewing.com and www.facebook.com/pg/mustangsallybrewing.