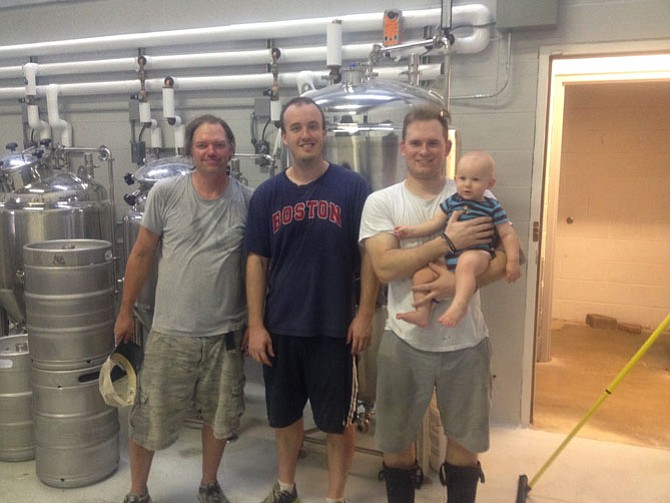 On Sept. 19, Aslin Beer will open at 257 Sunset Park Drive, Herndon, and will be Herndon’s first small-batch brewery or nanobrewery. The brewhouse neighbors Reston. “The location is the best of both worlds, it made sense,” said co-founder Andrew Kelley. Equipment for the brewery arrived in July, and the microbrewery owners have been setting up their operation. One would not guess the site was a former sports complex.

“We are going to open with flagship beers, and will then begin to open some experimental beers. We will focus on what we know and do well,” said Kelley. The owners say the 2.250-square-foot location is an ideal location for private parties. They hope to partner with the neighboring Sunset Park NextStop Theatre for special events. Aslin Beer has also connected with local businesses including Green Lizard Cycling. The Town of Herndon has welcomed the new enterprise.

The family owned business will not distribute their beers to stores for the first year, but rather encourage everyone to visit the microbrewery. The brewhouse will have 28 seats with standing room. The family will start out serving six beers on tap, said Kelley: an IPA, Double IPA, Imperial Stout, Lime Kolsch, Rye Ale, Saison, Black IPA. Kelly describes the Lime Kolsch as similar to a lager with a refreshing mix. Co-founder Kai Leszkowicz notes some of their IPAs or Indian Pale Ales will be based on a New England style.

Co-owner Richard Thompson looks forward to opening the site. “I think this is a great location. People here are interested in new experiences, and craft beer is a new experience,” said Thompson. The microbrewery will be an experience different from a bar, and will have access to the W&OD bike trail. Thompson and the co-owners of Aslin agree local brewers have encouraged their project. “The great thing about the craft beer community is people are so giving in this community,” said Thompson. Thompson will help run day-to-day activities at the brewery.

"Over the last few years beer has gone from huge national breweries, to large scale micro-breweries, and now we are going to small scale local nano-breweries," said Dave Mackie, an employee and beer buyer at The Wine Cabinet located at Reston. Governor Terry McAuliffe declared August Craft Beer Month, and some believe Virginia is entering into a "Golden Age of Beer".

Mackie believes Virginia is becoming one of the biggest beer destinations in the country. "I personally love the idea of beer going back to its local roots. It's the way it used to be in Europe and early America. Every town had their own brewery and they'd distinguish themselves with a particular style in most cases. It turned into a taste of the area, just like the wineries. We lost that at some point, but now that it's coming back I'm all for it," stated Mackie.