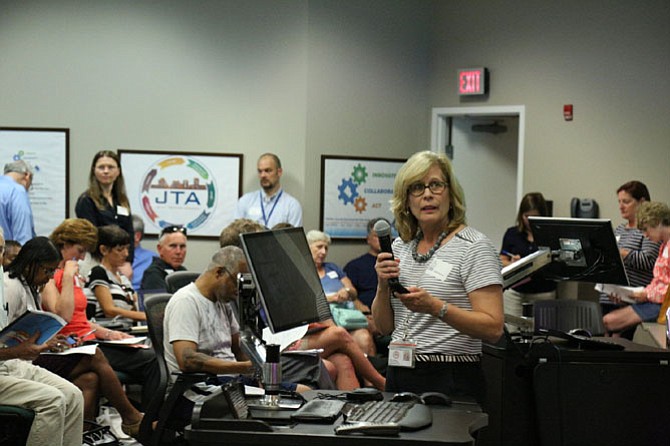 Amanda Staudt and Sean Willson, who both live in Reston, are opposed to permitting short-term rentals in residential areas of the county. 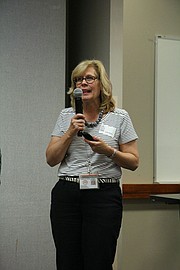 “Our ordinance is 40 years old,” Leslie Johnson, zoning administrator for the county, said during the open house. “It was adopted in 1978 and it has been amended 467 times, so we think it’s time to kind of bring us forward into the 21st century and update it.”

As Fairfax County works to regulate the use of short-term rental properties, disputes between neighbors continue to flare up.

STRs, or spaces that are rented by tenants for fewer than 30 consecutive days, can be accessed through lodging reservation websites like Airbnb and other companies, like Craigslist, HomeAway and FlipKey. However, operating such a rental is illegal in the county because the zoning ordinance does not account for their existence and therefore does not permit them.

“Localities have always had the authority to regulate short-term rentals,” said state Sen. Scott Surovell (D-36). “I’m not sure why Fairfax County had never acted before this year, but many localities in Virginia have.”

Surovell voted for Senate Bill 1578, “Short-term rental property; registration of persons offering property for rental,” which was signed into law on March 24, taking effect on July 1. The new legislation authorizes localities in the commonwealth to adopt an ordinance to require people to register annually in a short-term rental registry.

“When the legislature decided to step in, it created some uncertainty about where we were going to go with the subject, but before we acted, it was always thought that localities could regulate Airbnb-type rentals all they wanted to,” he said.

The legislation solidifies what localities already had the power to do and will encourage those that have not addressed the issue to do so, according to Surovell.

The legislation has motivated Fairfax County to act, but not before disputes started brewing in residential neighborhoods.

TWO ROOMS of the Herrity Building in Fairfax were filled to standing room only on July 26, during an open house about the county’s proposed zoning changes.

“This is our first foray into what we’re calling an open house,” said Leslie Johnson, zoning administrator for the county. “We have a lot of different topic areas that we’re working on as part of the amending of the zoning ordinance. We thought it was a good opportunity to bring people in to talk to our staff, to be able to ask questions on what we’re doing and just let people know that we are working on modernizing our zoning ordinance.”

The Zoning Administration Division of the Fairfax County Department of Planning and Zoning launched the Modernization of Fairfax County’s Zoning Ordinance initiative, or zMod, after the plan was presented to the Board of Supervisors in March.

“Our ordinance is 40 years old and it does need some rebooting,” Johnson said. “We’re looking at not only updating some of the provisions, but more importantly, we’re also looking at updating the format and kind of restructuring it; maybe bucketing uses so they’re more in categories, so as uses change, we have a better ability to put new uses into a category.”

Up until Aug. 31, the county was collecting public feedback about STRs through an online survey. County residents were able to learn about the results from the survey and weigh in on the topic during three community meetings this month: The first was held on Sept. 5 in Reston, the second is scheduled for Sept. 13 in Alexandria and the will be held Monday, Sept. 25, 7 p.m. in the Dranesville District Community Room at the McLean Governmental Center, 1437 Balls Hill Road, McLean.

The Zoning Administration Division will start putting together concepts, strategies and recommendations for the Board of Supervisors to consider after the September meetings, according to Leslie Johnson, zoning administrator.

“Ultimately, we have to present something to the board for them to react to and for them to approve, but we try to provide professional recommendations to them,” Johnson said.

the number of seats and employees to the square feet of a restaurant’s gross floor area.

Also being drafted is an increase to the percentage allowed for residential homeowners to cover their backyards with patios, pool decking and other man-made features. Current provisions only allow for up to 30 percent of a backyard of a single-family dwelling to be covered. The changes could allow for up to 60 percent of coverage.

The county’s Sign Ordinance is also being rewritten in response to a U.S. Supreme Court decision in Reed v. Town of Gilbert in June 2015, which clarified when municipalities may impose content-based restrictions on signage. The rewrite of the zoning rules for signs will make them content-neutral.

Among all of the proposed updates, short-term rentals are the hot topic, says Johnson.

“There were people that have concerns about short-term rentals that are creating problems for them in their neighborhoods,” said Lily Yegazu, who works for the Department of Planning and Zoning and manned the STR booth at the open house. “There are also people that wanted to know how to do it [list property for short-term rental].”

Whether people support STRs or not, they are currently illegal in the county.

“We do not allow for transient occupancy of a dwelling unit, unless it’s a bed and breakfast, which requires special exception approval [from the Board of Supervisors],” Johnson said during the meeting.

Amanda Staudt and Peggy Hillman of North Reston, who have an Airbnb property operating on their street in a residential neighborhood, were vocal about their opposition to STRs at the meeting.

“We have a small cul-de-sac with 21 kids 18 and younger,” Staudt said. “One of the houses on our street, the owner moved in a year and a half ago, moved into the basement and started renting out individual rooms at about $35 a night. So basically, it was a small hotel.”

The women’s anxiety over safety concerns with their transient neighbors was made real.

“We have had incidents where we’ve had to contact the police because of some of the residents, or customers — whatever you want to call them — were giving undesired attention to teenage girls in the neighborhood,” Staudt said.

The two women said they have complained to the county non-stop over their concerns of the illegal activity on their street.

“They’ve been semi-responsive, but they’ve basically said that they are limited in what they can do on enforcement,” Staudt said.

The two women worry that if the county cannot regulate current law, then the county will not be able to enforce a potential registry if STRs are permitted.

“If they can’t enforce it now effectively, how are they going to enforce it if they make it more complicated and available to more people?” Hillman said.

Hotels have always been regulated and people don’t have a right to run hotels in residential neighborhoods.

But he agrees with Staudt and Hillman that the county’s enforcement has been weak.

OVER THE PAST YEAR, the Fairfax County Department of Code Compliance received 18 complaints of possible STRs operating in the county, according to Tony Castrilli, a spokesperson for the county government.

“DCC staff investigated these complaints and found sufficient information to corroborate two [short-term rentals], one in the Mason District and one in the Mount Vernon District, for which notices of violation were issued,” Castrilli said. “Some of the other cases were closed because there was insufficient evidence that STRs were actually operating at those addresses or that there were any other zoning violations occurring.”

John McEwan and Blake Ratcliff are appealing their citations and have been scheduled to have hearings on Nov. 29, according to McEwan.

McEwan said he would be appealing the violation at the cost of $600 because he was told by various county employees that no citations would be given while the county considers changes to the zoning laws.

Others in the crowd were worried that the overwhelming tide against STRs could sway the opinion of officials and bar them from participating in a form of income they have come to rely upon.

Michelle Minstrell lives in her home in Falls Church and regularly rents out a spare room on Airbnb to help cover the expense of her mortgage and has never received a complaint from her neighbors.

“We have permit parking on our streets and I have off-street parking for that additional resident and my vehicle is off the street as well,” Minstrell said. “I’ve never had any noise problems. Neighbors have not mentioned issues at all.”

With Minstrell’s advice, another single woman in her neighborhood with a mortgage has started renting out space in her home on Airbnb.

“There is such a huge range of what the short-term rental can be,” she said. “I live in my house and I’m only renting a small portion of it.”

“I fear that the people who might be angry about it are seeing the whole party houses, absentee homeowner situation and not realizing that there are those of us who are making money to pay for our mortgage off of a roommate,” she added.