1970s Fairfax kitchen gets a makeover. 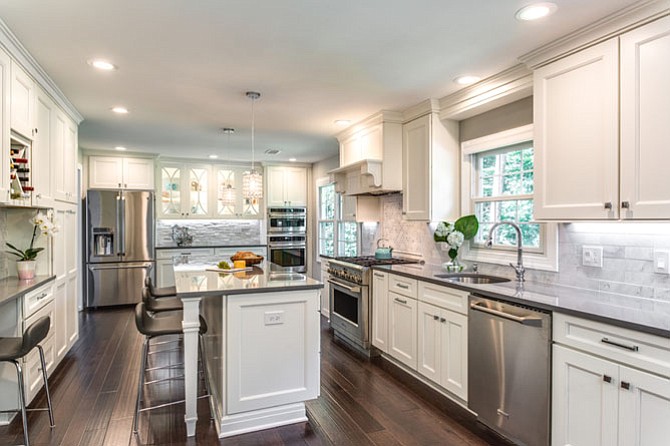 This Fairfax kitchen was enlarged to create a space for entertaining for a family of five. Photo courtesy of Nicely Done Kitchens and Baths

“The project resulted in a beautiful and ultra-functional centerpiece to this Fairfax family’s home.” — Cathy Goss, Nicely Done Kitchens and Baths

When a Fairfax family of five decided that their 1970s-era kitchen needed to be brought into the 21st century they enlisted the help of Nicely Done Kitchens and Baths. The homeowners also wanted more space for entertaining and to accommodate their large family.

"This was a particularly interesting project,” said designer Cathy Goss of Nicely Done Kitchens and Baths. “It involved incorporating four different functions into one uniquely-sized space.”

Two adjacent rooms were combined to allow space for an island, pantry, command center and a station for cooking and the subsequent clean-up. The design team removed a wall between the kitchen and dining room to create a larger kitchen area. They also incorporated two different backsplashes into the design: a marble subway tile with a marble accent under the range hood and a cut stone surface at the glass cabinets. LED under-cabinet lighting accents the quartz countertops.

“The cabinetry is a beautiful example of reverse raised panel paired with eclipse glass doors,” said Goss. “The project resulted in a beautiful and ultra-functional centerpiece to this Fairfax family’s home."