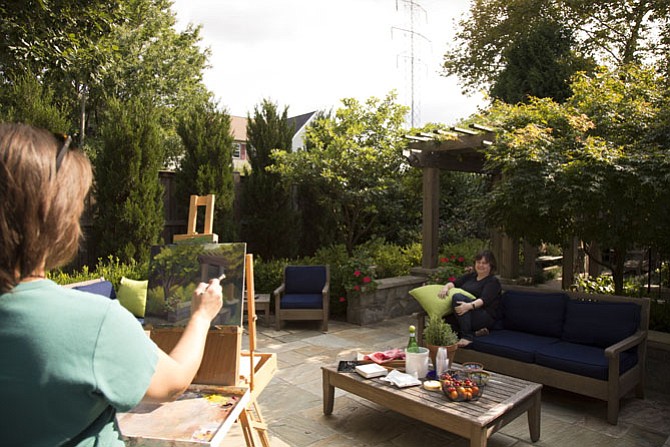 Chantilly-based multimedia artist Lorrie Herman paints an oil painting of Signe and Paul Friedrichs’ backyard garden during the tour. Signe’s favorite spot in the garden is her outdoor couch. Photo by Fallon Forbush. 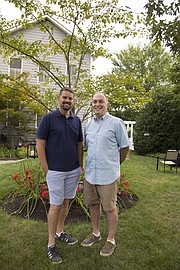 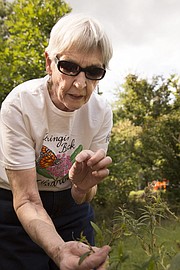 Carol Hadlock, president of the Friends of Runnymede Park, shows visitors how to find caterpillars in their garden. A sign that a monarch egg has hatched are circular holes in the leaves of milkweed plants. After a female monarch butterfly leaves an egg on a milkweed leaf, hatching caterpillars chew their way out of the egg and through the leaf to escape, according to Hadlock.

Susan Green of Herndon peeks through Carol Hadlock’s butterfly terrarium to see five monarch butterflies that were reared at her home. Hadlock released them into the wild at the end of the tour.

Friends of Runnymede Park will host a native plant sale — including milkweed plants — this Saturday, Sept. 16, at the park from 10 a.m. to 2 p.m. The plants that will be sold will be supplied by Hamilton-based Watermark Woods Native Plants, which does not use pesticides, according to Hadlock.

Approximately 100 people toured six gardens during the Herndon Garden Tour on Sunday, Sept. 10, according to Mercia Hobson, co-chair of this year’s tour.

For the first time, a public garden was on the tour.

The site is certified and registered by Monarch Watch as an official Monarch Waystation by providing milkweeds, nectar sources and shelter that is needed to sustain monarch butterflies as they migrate through North America.

The waystation came about after Mayor Lisa Merkel signed the Mayors’ Monarch Pledge last May and the Friends of Runnymede Park planted the garden. The pledge, organized by the National Wildlife Federation, commits local government leaders in the U.S., Mexico and Canada to restore habitat for the butterflies in their community and to encourage their citizens to do the same.

Carol Hadlock, president of the Friends of Runnymede Park, is passionate about her monarch butterflies and was on hand during the tour to educate visitors about her mission to save them.

The species’ population has declined by 90 percent in the past 20 years, according to the National Wildlife Federation. Since they migrate, millions of their colonies were killed off in Mexico storms.

“We have had so many all over Virginia, it’s been a banner year,” she said.

The small garden at the park has reared at least 25 monarch butterflies, according to Hadlock, which pales in comparison to her work at home.

Hadlock has released more than 100 monarch butterflies from her home since Aug. 1.

“I find them [monarch caterpillars] and bring them inside the house,” she said. “It’s like taking care of kids, but really rewarding.”

Hadlock feeds her caterpillars with milkweed leaves twice a day until they get big enough to form a chrysalis and enter metamorphosis.

Hadlock has more than 50 milkweed plants at her home that have spread from one side of her house to the other.

“Plant it and they will come,” she said.

“It’s comfy, it’s got shade,” Town Councilmember Signe Friedrichs said of her favorite spot in her backyard Italianate: The couch next to the wooden pergola.

Visitors are first greeted by a large oak tree and then spot a compact outdoor pool from Endless Pools.

The Friedrichs’ back garden had become overgrown with Arbor Vitae and other plants that had taken over and closed off the space. The couple landscaped the yard four years ago and have found it to be the perfect place to sit back with a glass of wine.

“We wanted a garden that reflected our fondness for Italian design,” she said. “We loved the geraniums in pots, the arbors and climbing wisteria we saw everywhere in southern Italy.”

The theme of this garden is to have something blooming at all times of the year.

Craig Villalobos and his partner Steven Humes purchased their home in 2001 with very basic landscaping. It has taken 12 years for them to achieve their goal.

The garden beds were laid out by the couple, though Humes admits that his partner has done 90 percent of the work while he tends to the grass in the yard.

“I like the solitude,” Villalobos said of completely transforming the backyard into a pristine garden with perennials, bulbs and flowering bushes. “I put on music and play with the soil. I’m an introvert.”

As visitors toured the garden, large photos were placed at locations to show how the space would look during different times of the year.

Other gardens on the tour included:

The garden tour is organized each year by members of the town’s Cultivating Community Initiative Committee. The initiative’s purpose is to enrich the quality of life in the town by encouraging neighborhood beautification and by building community spirit. The volunteer committee also organizes these activities: Yard of the Month, Good Neighbor Award, Dress-Up Herndon for the Holidays and the Holiday Homes Tour.