Friends of Runnymede Park watch Mayor Lisa Merkel sign the Mayor for Monarchs pledge. The Town will initiate efforts to help the monarch butterfly population, which has dwindled by 90 percent the last two decades, according to the National Wildlife Federation. Photo by Ken Moore. 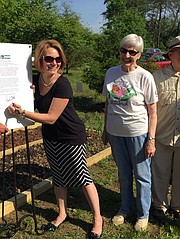 Mayor Lisa Merkel signs the Mayor for Monarchs pledge at the garden Carol Hadlock and Friends of Runnymede Park planted specifically to attract monarch butterflies and give them habitat to lay their eggs.

Carol Hadlock said “It’s very easy, very easy” to include milkweed in private gardens. Monarch butterflies need milkweed plants to lay their eggs; it is the only thing their caterpillars will eat. “We like the saying, if you plant it they will come,” said Hadlock.

Carol and Jay Hadlock take precise details to facilitate the birth of monarch butterflies in their Herndon home. They hope their efforts are one part of a cross-continent movement to save the extinguishing monarch butterfly population.

“You can tell when they are getting ready to lay eggs because they hang from the underside of the leaf,” said Jay Hadlock.

One female monarch can lay more than 400 eggs.

“When we see some activity like that, we’ll wait for a couple of days, then we’ll go out and check on the milkweed, we’ll carefully lift up that leaf, carefully break that leaf off and bring it inside and put it in a cage,” he said.

“Nature takes it course,” he said. “And if the eggs are viable and hatches, a tiny caterpillar will start to feed on that milkweed.”

The Hadlocks continuously feed the caterpillars milkweed leaves, the only thing they will eat, and the fortunate caterpillars get bigger and bigger. “It sheds its skin several times and when it's ready, it climbs up the side of the cage and spins a silvery thread and hangs from the top of the cage,” said Hadlock.

The caterpillar then develops into a chrysalis.

The Hadlocks describe the exact colors of the chrysalis, and how the colors change when a butterfly is about to emerge.

When a monarch hatches about 10 days after the chrysalis is formed, it will open its wings to dry a couple of days.

The Hadlocks said they grew tired of missing the moment of the birth, so now they just sit, wait and watch. They always ask themselves how such dazzling monarch butterfly wings can emerge from such a tiny sack.

Last year, Jay and Carol had 81 monarch butterflies babies, that they helped fly out of their nest en route to the butterflies’ winter habitat.

These butterflies are the third generation, and their children become the last generation that makes it to Mexico.

“If all goes well, it will get to Mexico,” he said.

THE MONARCH POPULATION has declined by more than 90 percent in the past two decades. Twenty years ago, more than one billion Eastern monarch butterflies migrated to Mexico. In the winter of 2014, only 60 million made the trip, according to the National Wildlife Foundation.

Last Wednesday at Runnymede Park in Herndon, Mayor Lisa Merkel became the first mayor in Virginia to sign her commitment to help save the monarch butterfly.

Monarch scientists attribute the decline to degradation and loss of summer breeding habitat in the U.S., and loss of winter habitat in Mexico, according to the National Wildlife Federation. Western populations of monarch butterflies that overwinter in California are also in decline.

“The idea is to get people to plant milkweed, encouraging the butterflies to lay eggs and raise these caterpillars that will turn into butterflies and send them on their way to Mexico,” said Carol Hadlock, president of The Friends of Runnymede Park.

They planted a couple of milkweed plants in a new monarch garden at Runnymede. They do so in their own gardens as well.

“Once it gets started it goes on its own. We like the saying, if you plant it they will come,” said Carol Hadlock.

“It’s very easy. It’s very easy,” she said. “And Friends of Runnymede park are trying to get plants that we can sell to people to plant in their own gardens. More and more nurseries are also starting to carry it because the word of the monarch butterflies is really spreading. It’s encouraging.”

MILKWEED IS THE ONLY thing that the caterpillar can feed on, said Hadlock. “So even if we get monarch adult butterflies and there's nothing for them to lay their eggs on and for these to hatch and have their caterpillars feed on we’re not making any progress.”

Friends of Runnymede Park will make milkweed plants available for sale on the garden tour on June 18. The Hadlock’s home and garden is on the tour, and they and the Browns will be available to answer questions on how they plant their own garden to attract monarch butterflies.

“This year, we thought we had a bit of a rebounding populations and then in March there was a historic storm that came through the forest sand knocked down trees and killed millions and millions of them,” said Carol Hadlock. “So we’re back to needing to build it up again. This whole project is to encourage people in the Town of Herndon, public and private citizens and everything, to plant milkweed.”

“It’s just became an iconic insect and iconic butterfly, kids in school do whole units on raising butterflies and learning about this metamorphosis,” said Carol Hadlock. “It would be such a terrible shame to lose the monarch.”

Verbatim: The monarch butterfly is an iconic North American species whose multigenerational migration and metamorphosis from caterpillar to butterfly has captured the imagination of millions of Americans.

We, the undersigned Mayors and local government chief executives, are deeply concerned about the decline of the monarch butterfly population.

Municipalities in particular can provide habitat at public parks, median strips, community gardens and municipal buildings that serve as community hubs such as recreation centers and libraries. Schools, homes and businesses can all provide essential habitat for monarchs too. Simple changes in landscaping ordinances or school policies can make a big difference for the monarch. Educating citizens about how and where to grow milkweed is also a key piece of the puzzle. Creating habitat and educating citizens will benefit other pollinators that need healthy habitat as well.

When Mayors speak up and take a stand, citizens notice. Therefore, we hereby commit to help restore habitat for the monarch and encourage our citizens to do the same, so that these magnificent butterflies will once again flourish across the continent.