From Waxed and Classic to Dull and Utilitarian
Votes

From Waxed and Classic to Dull and Utilitarian 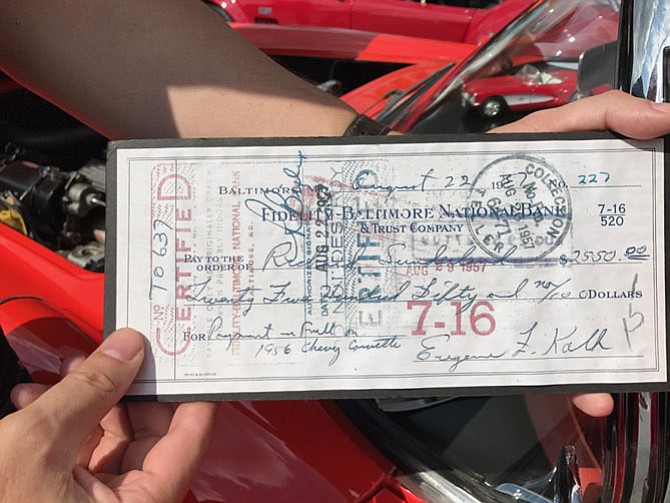 John Kolb holds a copy of the original canceled check his father wrote for $2,550 to pay in full and purchase the red 1956 Chevy Corvette he now owns. "$2,500 was a lot of money for an enlisted man at that time," Kolb said. Photo by Mercia Hobson.

Herndon — Shortly after dawn on Sunday, Sept. 10 owners of classic cars, trucks, and motorcycles as well as owners of not so "classic" vehicles headed toward lower Lynn Street in Historic Downtown Herndon. They were there to complete entry registration forms for The Herndon Car, Truck, and Bike Show produced by the Herndon Rotary Club. Proceeds from the show benefited the activities of the nonprofit organization and a scholarship fund for students at the George Mason University School of Nursing.

John Kolb of Centreville was at the show with his 1956 bright red Chevy Corvette previously owned by his dad, Eugene Kolb. Kolb said, "My father bought this car in in 1957 for $2,550, a lot of money for an enlisted man back then, but he bought it anyway. Then he drove it for 98,000 miles. Used it as a truck. Put his mower in the back and would go roaring off." Asked about needed repairs when he acquired the Corvette, Kolb replied, "I repaired it at the speed of my wallet, two years."

John Keys of Herndon attended the show as a spectator and appeared to be having a good time. He looked over many of the vehicles and talked with their owners. Asked about his vote for People's Choice, Keys shared, "It's a tough job, all the good cars and good people."

One car that was not shiny and not restored was parked on the street near the Red Caboose. Dwarfed by the big shiny American made classic trucks and cars around it, people walked by. Understated in appearance, not many patrons lingered around the small boxy "oxidized looking" vehicle until the person next to it, Scott Tilton started talking.

Tilton explained the car belonged to his wife, Melissa.

"You'll never see any around here, although there was nearly three million made,” Tilton said. The dull sand-colored car was a 1983 Trabant 601 S, made of composite material, a hard plastic composed of recycled materials: cotton waste from the Soviet Union and phenol resins from the East German dye industry. VEB Sachsenring in Zwickau, Sachsen East Germany, produced it.

According to Tilton, production of the Trabant began in 1957 in the German Democratic Republic (GDR), East Germany and ceased in 1991 shortly after the fall of the Berlin Wall. While the little car was built out of plastic and Socialism Tilton said, it was affordable to the East Germans, reliable, and easy to maintain with a two-cylinder two-stroke otto engine.

"You have to mix oil with gas, like a lawnmower," Tilton explained. Since the Trabant burns its lubricating oil by design, it produces a smoky tailpipe emission. Tilton's blue t-shirt displayed an image of a Trabant with a burst of white smoke behind it. Tilton added that there was no gas gauge "inside the car." The driver has to go outside, lift the hood and check the gas level with a dipstick. When the Berlin Wall fell, East Germans refugees drove over the rubble in their Trabants and abandoned their cars in cities such as Prague.

ACROSS THE VENUE, pedestrians could be seen strolling around the many other vehicles at the show, mingling and talking with vehicles’ owners.

The multi-generational family was instantly attracted to a very distinctive 1936 Chevrolet 2 ton coach painted sea foam green and owned by Richard Harrison of Lucketts, Va. Harrison proudly told the family how his 1936 Chevy drives like a new car with its 1972 Camaro front clip and spring. Harrison said he added disc brakes to stop the vehicle better and make for a safer ride.

After taking a family photo of their outing in front of Harrison’s automobile, Von Herbulis summed up why he came to the event in a short, concise statement. "My family — together."

For more information about the Herndon Rotary Club and their many efforts of giving back to the community, sponsor an upcoming event or consider membership, visit herndonrotaryclub or call Hayward Hull at 571-259-4087.