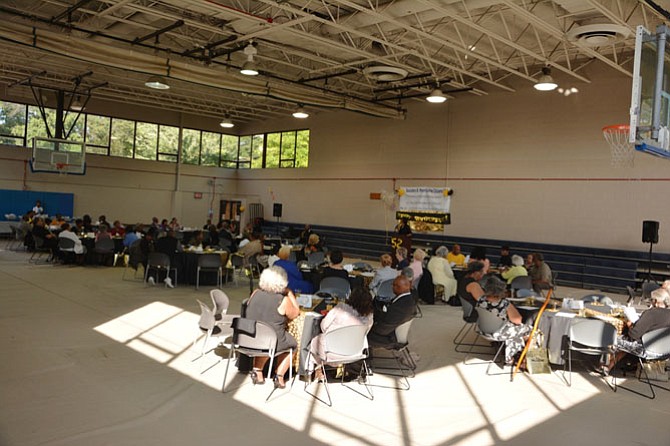 The Gum Springs Community Center was the site for the anniversary celebration of the Saunders B. Moon Senior Citizens Club. Photo by Mike Salmon.

Mount Vernon — In September 1965, President Lyndon B. Johnson launched the war on 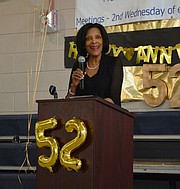 poverty, and out of this initiative, the Saunders B. Moon Senior Citizens Club was born in Gum Springs. The members have came and went through the years, but now number stands at 50 members who celebrated their 52nd anniversary on Sept. 9 at the Gum Springs Community Center.

“What we have, we’re willing to share with the community,” said Mattie Palmore, who has been a member since the early 1980s. “We all hang together and look out for each other,” she added.

Each year, they pay $2 each and $.50 for good cheer, so there isn’t a huge bank account to rely on, but through community contributions, they are able to put together Halloween events, Thanksgiving meals for a few families and at Christmas they adopt a few families as well, and make their lives better for the time. The United Black Fund is a contributor, Palmore said. Their efforts are aimed at the senior population of the neighborhood, but Palmore did say “we’re pulling in the baby boomers,” who are around 60 years old.

Florence King was the guest speaker at the anniversary event, and she noted the importance of the legacy that is left behind by the elders. The legacy is defined by character and integrity. “You want to be able to leave something behind for your children,” she said, noting the importance of teachings in the Bible. “God wants us to help the poor,” King said.

King was a graduate of Luther Jackson High School in 1965. Luther Jackson was the county's first grade 7-12 school for black students, according to information on its Facebook page. The school remained a racially segregated public school until 1965 when it became a racially integrated school for grades seven and eight.

At the anniversary celebration, a group of teens called “Ladies in Focus,” served the food. The seniors club is teaching the Ladies in Focus about the older generation and trying to pass on the legacy.

“This is like an intergenerational thing,” said Clarice Evans-Carter, the secretary of the group.