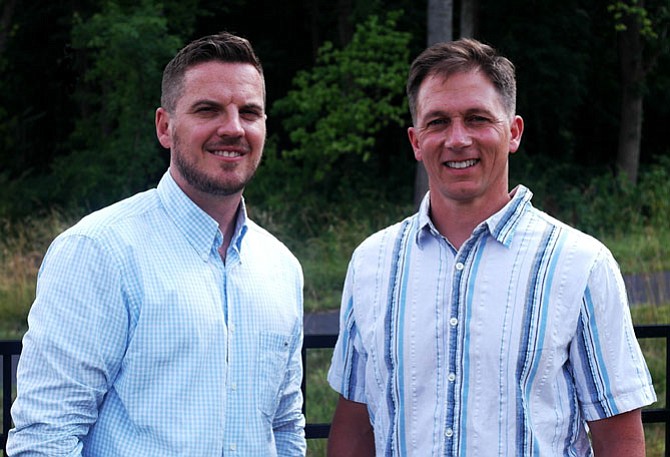 It used to be that only adults in corporate environments suffered the effects of spending hours in front of a computer screen. Now, students are in a similar boat. This concerning trend inspired two Chantilly High School teachers, Joe Clement and Matt Miles, to write the book “Screen Schooled.” Through their writing, they hope to encourage parents to initiate and engage in proactive discussion about the problems surrounding technology-dominated classrooms.

“The biggest idea we hope the educational community takes from our book is the fact that the most effective teaching ‘technology’ imaginable are quality teachers,” Clement said. “Schools already have these teachers at their disposal. Students don't need more screen time in their lives. What they need is more time spent engaged with other people. No app, or YouTube video, or blog post, or PowerPoint, or Prezi will ever come close to replacing an influential, caring, inspiration teacher who is present in his or her students' lives.”

“Screen Schooled” is scheduled for official release on Oct. 1, and both Clement and Miles emphasized that neither their opinions nor the views expressed in the book reflect those of Chantilly High School, or Fairfax County Public Schools in general.

Clement, who teaches Advanced Placement economics at Chantilly, just started his 24th year as a teacher. He’s seen the emergence of standardized testing and the federal benchmarks established by 2001’s No Child Left Behind Act. Today, he finds himself in an era where technology seems to rule public schools.

“It wasn’t all that long ago that we were told to confiscate cell phones as soon as they came out,” Clement said. “It’s funny because now the recommendation is that they should use their cell phones to in class for educational purposes. That’s a lot to ask of a kid. There is an enormous temptation with a phone to do anything but school work. Why make it harder for kids to focus on learning?”

Clement added that teachers new to FCPS might be convinced that students today need technology to learn effectively.

“As teachers, we are being told that technology has changed the way kids learn, but that’s not true,” Clement said. “The devices they’re being encouraged to use are often getting in the way of them learning — especially when overused. While it might seem like a good idea to load an educational game on a tablet or a phone, it’s not doing any good for the kid. A tremendous amount of research shows that it’s actually doing more harm than good.”

Miles, an educator of 12 years, currently teaches psychology, political science and Advanced Placement government at Chantilly. Both he and Clement have taught a number of different subjects throughout their careers.

In their combined nearly four decades of teaching — through multiple trends, criteria and encouraged methodologies — the one constant has been dedicated educators. Unfortunately, as Miles and Clement discuss in “Screen Schooled,” the edge that school systems think technology is giving students may actually be edging out the influence of such teachers.

“We aren’t saying that there are a whole bunch of bad teachers out there trying to sell out kids,” Clement said. “If you look at some of the Dell or Apple or any of the [education technology] companies, they pitch this idea that kids learn differently now, and that’s baloney. But, then you go to conventions and conferences, and you start to think that’s the truth. You’re made to feel like a dinosaur if you don’t use screen-based technology every day. A well-prepared teacher who is interested in the kid, subject, and is doing their best to make the kid to see the significance of the skill or content they are teaching, the teacher seems less important to the process. You’re told that if you aren’t using screens in the classroom, you’re out of date. We were literally told in an in-service teacher that if you aren’t on Twitter, then you are a VHS tape — totally outdated, nobody can relate to you.”

The “Screen Schooled” duo conducted years of research on the technology trend, and numbers don’t lie: the profile of a young adult prior to the dawn of this technology era is quite different from that of a graduate who spent their years in the classroom turning pages of their textbooks instead of clicking through virtual ones.

“If you look at the numbers, such as the percentage of students who graduate from college in five years, the percentage of college graduates that are fully employed, and even the age at which someone moves out of their parents' home: all of these statistics are trending negatively for Millennials, and are getting worse,” Clement said. “Increased technology use is certainly not the root cause of all these ills, but it definitely exacerbates the problem. We see attitudes in the classroom reflecting that the reward of gaining knowledge can't compete with the immediate gratification provided by [online games like] FIFA, Madden, World of War Craft, or countless video games and gaming apps.”

The push for more technology in schools is not at all unique to Fairfax County, which could be foreboding for the future of this country.

“The issues in the book are certainly not unique to FCPS,” Miles said. “We've talked to teachers from all over the country and even the world who are dealing with this issue. Schools that make their focus teaching students technology, are going to, at best, produce students who are very familiar with technologies that are, by the time they reach the workforce, irrelevant and antiquated. School systems can't afford cutting edge technology, but depend rather on free software suites and hardware bought in bulk at discounted prices. Think about this: some school systems have purchased laptops for all students, Kindergarten through 12th grade. What technology taught to kindergartners will still be around when they enter the workforce 16 plus years later? This shift in focus comes at a loss of what schools used to teach, such as critical thinking, reading comprehension, math, writing, and other skills that never lose relevance.”

Declining appreciation for knowledge and a lack of technical relevance for this generation aren’t the only issues, either.

“In lots of public schools, like FCPS, as many textbooks as possible are online,” Clement said. “It’s been really frustrating because I know what this does to their brain. But, they don’t really have any other choice. Kids want to be listened to, and they want know why they are learning what they’re learning, and this doesn’t change. Now, with cell phones, television, and tablets, kids already spend more than nine hours a day on devices. Now more than ever, they need relationship development in the classroom. School is the place they should be learning how to solve problems with people sitting next to them. The need for those skills will never go away.”

Of course, Miles and Clement acknowledge that technology – and its rapid evolution – isn’t going away any time soon. They call for some kind of balance – before it’s too late.

“All trends in education seem to be cyclical,” Miles said. “The problem with this current trend of ‘Ed-Tech’ is not only is it ineffective at producing higher levels of learning, it's also incredibly expensive. School systems all over the country are trying to grapple with having to choose between spending large portions of their very limited budgets on technology, or things like high-quality teachers. We do believe there is a place for technology in schools. You cannot teach computer science without computers, for instance. Schools will have to find a reasonable balance between incorporating technology into the classroom setting while not making it the primary focus of the classroom.”

All 10 chapters of “Screen Schooled” end with takeaways for parents of school-aged children.The co-authors hope the book sheds light for parents and teachers on the complex relationship between screen-time and children.

“People should consider that many of Silicon Valley’s leading executives set strict limits on screen time for their kids,” Miles said. “It should tell us something that they’re keeping technology from their own kids but are very willing to sell it to parents and school systems. The main thing we’d like is for parents and educators to think and talk about whether or not more screen time is good for kids. A robust discussion seems to be missing here. Schools just seem to have been told to implement these programs with very little proof that they are good for kids.”

For more information, and to purchase the book, visit www.screenschooled.com.

To meet the authors live and in person, the public is invited to a release celebration at Dogfish Head Alehouse in Chantilly on Thursday, Oct. 5, at 4:30 pm.