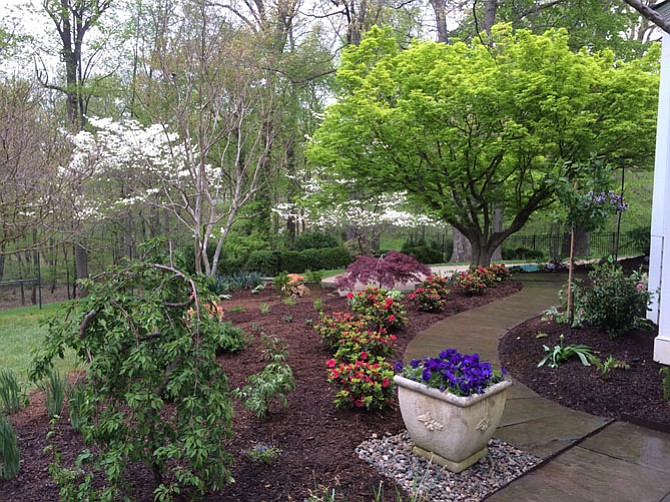 “As for shrubs, you can plant anything right now, as long as it has been acclimated and does not have new tender growth.” — Haynes Davis, American Plant 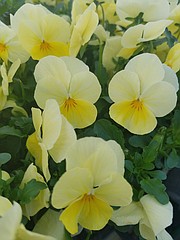 Pansies and Violas can be planted now to offer bright colors to a spring garden, says Haynes Davis of American Plant in Bethesda.

The colors of Camellia blooms can be enjoyed now, says David Watkins of Merrifield Garden Center.

One of the most anticipated rites of spring is the vibrancy of the first blooms on flowers and trees. However, this beauty can only be savored after the weeding, pruning and planting are finished. While preparing and planning a spring garden is not an effortless endeavor, local landscaping gurus say that an organized plan can make it more manageable.

“The first thing you need to do is cut back any ornamental grasses like Liriope two to four inches off the ground, so the brown, tired-looking leaves are gone before the new leaves start to grow,” said David Watkins, general manager of Merrifield Garden Center. “If you wait too long, it’s tough to separate old from new and you end up getting brown on the new leaves.”

Removing all of the leaves and other debris from the flowerbed is the next step, advises Haynes Davis of American Plant in Bethesda. “Cut back any perennials or ornamental grasses that have not already been cut back and prune out any dead branches from existing shrubs,” he said. “I fertilize at this point with … a slow-release, organic fertilizer that works for blooming and evergreen plants. Lastly I put down a fresh layer of mulch and then the beds are ready for spring.”

Preparing to have a perfectly manicured lawn for spring begins by raking, removing all of the fallen leaves, adds Davis. “Having your PH tested would be a good idea because now would be the time to put down lime to get your soil to the correct acidity level which is 5.8 to 6.5,” he said. “This is also the time to put down pre-emergent [herbicides] to keep the weeds from coming up, but you have to remember, if you put down a pre-emergent you cannot over seed for six to 12 weeks, depending on the product you are using.”

Cutting away dead or overgrown branches to stimulate new growth comes next, says Watkins. “I would prune any branches on shrubs and trees that are crisscrossing and rubbing against each other,” he said. “Then edge, mulch and fertilize your plants. Remove old mulch first and put down two to three inches of new mulch, but make sure you don’t put it too close to the trunk of the plant.”

When whipping a garden into shape for spring, Alexandria-based landscape designer Ruth Tinsley believes in engaging the senses. “If you plant fragrant spring flowers like Honeysuckle, Phlox, Butterfly Bush and roses, they will give you a pleasant aroma when you are walking through your yard or garden,” she said. “Plant them in large swaths to get the biggest impact.”

Butterfly Bush and Stock are two flowering plants that do double-duty, advises Tinsley. “They not only have a nice fragrance, but they will add beautiful color to your yard or garden. Butterfly bush is relatively hearty and has vibrant pink and purple blooms, and Stock comes in a vivid, dark-red color.”

Until temperatures are warm on a consistent basis, Davis offers a caveat about planting flowers. “I would only plant Pansies and Violas for flowers outside,” he said. “They will give you good color all the way up to the time to plant summer annuals, which is when we have sustained night time temps around 55 degrees, usually around mid-April. For perennials about the only thing you can plant now would be hellebores.”

“Forsythia bushes are blooming now. They’re one of the first to bloom,” added Watkins. “Shortly Camellias and Azaleas will start to bloom.

Options for plants that can tolerate cooler temperatures are plentiful, advises Watkins. “All of your trees and shrubs can be planted now and it’s great to get your garden started early so there’s less maintenance in the summer,” he said. “All of our ornamental trees like Cherry, Redbud, Crabapple and Dogwood can be planted now.”

“As for shrubs, you can plant anything right now as long as it has been acclimated and does not have new tender growth,” added Davis. “We have all of our plants that are tender either in our greenhouses or covered with frost blankets until the temperatures warm up.”