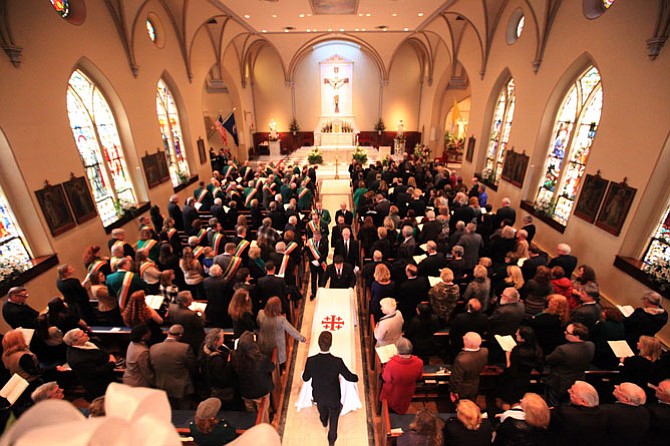 The funeral of Pat Troy at the Basilica of St. Mary, Alexandria, April 7, 2018. Photo by James Cullum/Gazette Packet

Pat Troy, founder of the city’s St. Patrick’s Day parade, was laid to rest on Saturday, April 9, at the Basilica of St. Mary. Hundreds attended the funeral, including city leaders, friends and family — a fitting tribute to the man who famously said, “It’s nice to be important, but it’s more important to be nice.”

Mayor Allison Silberberg said that Troy’s death on March 22 was a loss for the city, especially so soon after serving as this year’s grand marshal of the city’s St. Patrick’s Day parade. He was 76 years old.

“We were very close,” Silberberg said. “What a loss. We will never see his like again.”

“Pat was an amazing ambassador for our city,” Wilson said. “He was a character who helped open the doors of our city to so many visitors for decades.”

“Pat was loved by so many who appreciated his charismatic, singular personality,” Moran said. “Back in 1982, my dad came down from Massachusetts to help me hold the lead banner in the first St. Patrick’s Day parade. Afterwards, [my dad] sang and danced all day and night at Ireland’s Own. Unfortunately, he never recovered from that day since he had cancer at the time, but it was his happiest memory of Alexandria and his son’s new political career.”

Former Alexandria Mayor Bill Euille said that he enjoyed his time with Troy, despite their political differences.

“He was successful, demanding and passionate in what he believed, but also a caring and giving individual in helping to make a difference in others lives,” Euille said.

“Pat was a very great friend who introduced me to the Ambassador of Ireland when I was vice mayor,” he said. “His friendship and loving kindness I will never forget.”

Joseph Troy traveled from Ireland to attend his cousin’s funeral.

“He was awesome. I loved him. We all loved him. He was the king of the family,” Troy said. “He was our king. He just completely devoted himself to other people.”

Christine Burke of Arlington knew Troy and frequented his pub, Pat Troy’s Ireland’s Own, for 20 years, and got lost on the way to the funeral. While she drove and smoked a cigarette through a cracked driver’s side window, she was drawn to the faint sound of the Alexandria Pipes and Drums playing “When Irish Eyes Are Smiling.”

“His pub saved me, in a way,” Burke said. “I became part of the group whenever there was a parade, and then you’d go over to the pub afterwards, and then you just felt like one of the family. You know, when you’re going through tough times in your life, you need that.”

“Pat was a mentor to so many of us who emigrated to Alexandria from Ireland in the mid-80s,” White said. “I will miss his sage advice as well as his friendship.”

Kim Moore is the chair of the Ballyshaners, a nonprofit that runs the annual St. Patrick’s Day Parade and other Irish-related events in the city. The word translates to “Old towners” in Gaelic.

“I don’t know what we’re going to do without him,” Moore said of Troy. “He taught me so much about the importance of being active in our community and I hope that the Ballyshaners will continue to live up to his legacy.”

Pat Troy is survived by his wife, Bernadette, children Kathleen and Patrick and a large extended family.

Troy’s son Patrick spoke about his father at the reception at the Basilica of St. Mary School gymnasium, which included pints of Guinness Irish Stout, Irish coffees and plenty of Irish fare.

“My dad doesn’t want to see us sad and upset,” Troy said. “Today’s a celebration, it’s a party and he wants us to have a good time.”