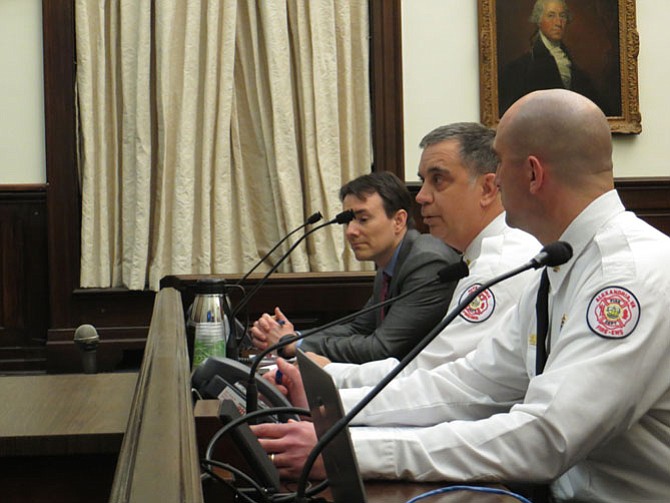 While Alexandria’s emergency services press for higher pay comparable to surrounding jurisdictions, the leadership in Alexandria’s Fire and Police Departments are looking to grants to address understaffing issues.

At a budget work session on April 4, city leadership met with the heads of several emergency services to discuss efforts to meet safety goals. One of the recurring trends in the discussion between the different departments was the need to fill critical positions.

Police Chief Mike Brown noted that the Alexandria Police Department needed six new full time employees for traffic safety enforcement. Brown said during the review of the city’s Vision Zero Plans, police and the Department of Transportation and Environmental Services reviewed traffic data to try and locate areas with high rates of traffic incidents. Brown said the team discovered that the troublesome locations migrate depending on the time of day and the day of the week. Brown, whose background before joining the Alexandria Police Department in 2017 was in California Highway Patrol, said the best solution for this kind of shifting crash hotspot was regularly moving auto units.

“We’re looking at working with the Highway Safety Office for grant opportunities,” said Brown. “Six new traffic enforcement officers will help us a great deal with our Vision Zero commitment.”

For the Alexandria Fire Department, Fire Chief Robert Dubé said the fire department needs to fill its positions on the ladder trucks. At the City Council meeting on April 10, Dubé asked the City Council for permission to pursue grants for nine new Alexandria firefighter positions to fully staff the city’s ladder trucks, while city funding could bring the other two Fire Department trucks up to full staffing.

The first two years of the grant would cover 75 percent of the salary for the new staff with city matching for the remaining 25 percent. That coverage decreases in the third year, and by the fourth year the city would be required to pay 100 percent of the new firefighter salary.

City Councillor Willie Bailey, an active firefighter of 26 years and a Battalion Chief for Fairfax County Fire and Rescue, said in the long run proper staffing is more economically feasible than running with an understaffed crew.

“It’s cheaper [in the long term],” said Bailey. “If you’re going to keep calling people back with overtime, you’re better off having those bodies in place. To me, this just makes sense.”

The City Council unanimously voted for Dubé to pursue the grant.