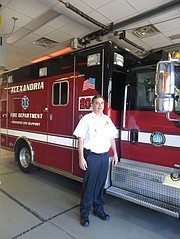 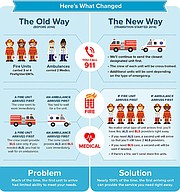 Infographic by the Alexandria Fire Department outlining changes to the plan.

Councilman Justin Wilson is choking on a fruit chew. After City Council votes on whether or not to call 911, emergency services arrives on the scene. Before 2014, if a fire unit had arrived on the scene first, the firefighter would have begun administering basic life support immediately. However, if more drastic measures were required, the firefighters would have to wait until the medical transport unit arrived to perform more invasive procedures. But with the Fire Department’s restructuring over the last year, no matter which unit arrived first, Wilson would be able to receive the needed emergency care. It was a hypothetical scenario used in the City Council’s Sept. 12 public hearing, to explain the layout of the new system implemented by the Alexandria Fire Department. But the new system raises questions, and not just about Wilson’s mortality.

The transition into a “Dual-Role Provider” system is currently in effect for the Alexandria Fire Department. Fire Stations 207 and 210 currently operate as dual-role service providers. While the change will have a major impact on emergency services, it is a very technical one for most outside the fire department, which is why the City Council has largely left the decisions to the judgment of Fire Chief Robert Dubé. In the old single-role system, if someone called 911, the care provided to the victim depended on whether or not an ambulance or a fire unit arrived at the scene first. Fire Units carried three or four Firefighter/EMTs who could provide basic life support (BLS) but not advanced life support (ALS). Under the new system, those providers are cross-trained. One medic rides along with the fire unit and is also trained as a firefighter, the medic on the ambulance is replaced with a firefighter specialist. In this way, no matter which vehicle arrives at a scene first, they can provide the same level of medical care. Both Arlington and Fairfax use dual-role systems, and their respective fire chiefs wrote in letters of support for the change to the Alexandria City Council.

However, the new plan is opposed by many of the city’s paramedics. Michael Kohrt, president-elect of the Alexandria Medics Association, said the plan fixes problems that don’t exist. According to Kohrt, most of the calls received by the Fire Department are for very routine situations that do not require ALS care. Dubé says there’s truth to this. The morning of the interview, the Fire Department receives a call about a traffic accident in Carlyle. It’s nothing too bad, it certainly doesn’t require ALS, and Dubé says that’s the majority of the types of calls received by the fire department. Only 8 percent of calls require ALS. However, if the situation were worse, the closest ambulance is in Del Ray. The closest fire unit? Just a few blocks away.

The association argues that the quality of care will not be as specialized as it would with a medical unit. Kohrt expressed serious concerns that one of the two firefighter-medics would be removed from the transport unit, replaced with a firefighter-specialist driver. Dubé answered that the second person on the medical transport unit is a driver, a role that doesn’t require extensive medical experience, but Kohrt noted that the situation can be a lot more complicated. Kohrt recalled an incident in Alexandria where a medical unit arrived at the scene of a shooting. It was a critical situation, and both of the medics were needed to save the victim’s life. Kohrt’s chief concern is that if the fire truck is away on a fire-related call, there will only be one paramedic available in a situation like this.

There is also the question of specialization.

“Advanced life support, when it is needed, needs to be performed by people who are very skilled at this,” said Kohrt. “What happens is, people come out of school and they learn their skill, and when they’re assigned to an engine company it removes their skills. Not all of it, but a good deal of it. Opening a surgical airway is not an option in Fairfax, they will just drive as fast as they can to somewhere that can do it.”

Kohrt argues that medics spend more time specifically training for medical emergencies, and more importantly, deal directly with those issues every time they go into the field. Dubé answered that the new firefighter-medics are held to the same high standards as current medic staff, but Kohrt is still skeptical.

“Something bad is going to happen if this plan continues,” said Kohrt. “You have all these fire trucks on every corner in case something happens. If the fire chief believes he needs paramedics on every truck, go ahead. But don’t take the resources away from ambulances in order to put those resources on a fire truck.”

Medics at the public hearing also raised concerns that single-role medics currently in the department, who weren’t cross-trained as firefighters, would be removed from their positions. Dubé said that no single-role medics would be forced out of their positions, even the current EMS supervisors, but as members of the department retire from those positions, they will be filled exclusively with cross-trained personnel.

Kohrt emphasized that the plan is continuing to evolve, and the Medics Association’s primary goal is to make sure the changes are for the better.

“We want to continue to fix the plan for the better,” said Kohrt. “We want it to be good for the people in this city.”