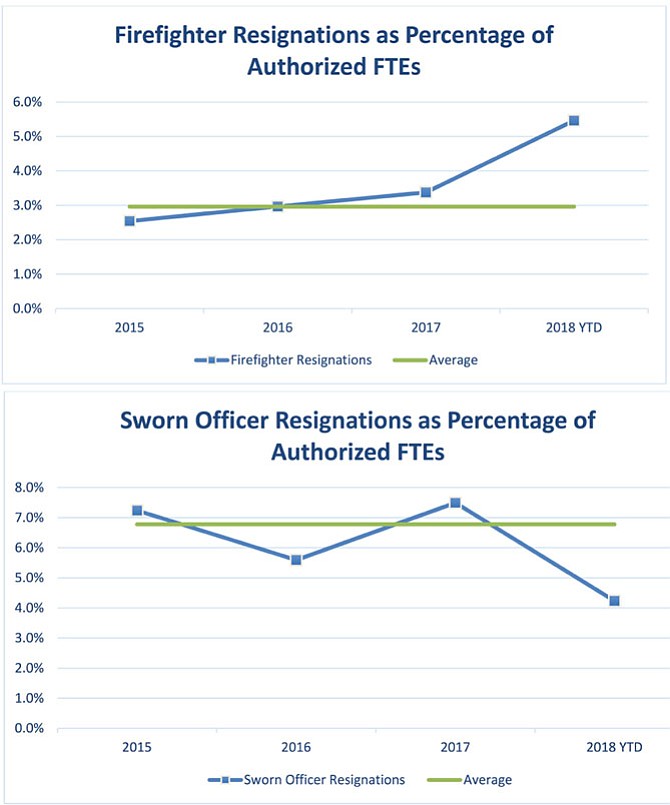 According to City Manager Mark Jinks’ budget proposal: “Attracting and keeping sworn police, fire, and sheriff’s positions continues to be particularly difficult, since increased competition from neighboring jurisdictions and agencies has overcome the city’s compensation improvements over the last three years. I am proposing $1.5 million to be set aside to address additional improvements in public safety recruitment and retention capabilities for uniformed police, fire and sheriff’s personnel following comprehensive studies. My goal is to implement tactical solutions in compensation and other aspects of employment, in order to keep pace with the rising offers being made by our regional competitors.”

“We’ve hired 96 firefighter/EMTs since October 2014; 28 of those have left for other places. So it’s pretty clear we’ve got to work on that,” said Fire Chief Robert Dubé.

“One of the [police officers] we just lost … went to the U.S. Park Police [under the U.S. National Park Service], and he did it specifically for the benefit package,” said Police Chief Mike Brown.

Especially around budget season, jurisdictional “cards get played close to the chest,” lest one tip off others to increase their compensation packages in order to stay competitive, said Jinks.

He expressed little enthusiasm for recent talk of a uniform pay bump, saying: “There are more nuances than just plain across-the-board.”

The uniformity and severity of the problem is contested. On the one hand, as of February, 13 Alexandria firefighters had resigned during FY 2018. That’s a rate of 5.5 percent year-to-date, up from 3 percent per year on average over the prior three fiscal years. That’s “marked” but not “extraordinary,” said Jinks in a March 14 memo. On the other hand, 13 police officers had resigned. That’s a rate of 4.2 percent per year, down from 6.8 percent on average.

Vice Mayor Justin Wilson said that council probably shouldn’t try in the short term to “figure out an exact menu of how we solve, on the dais, pay issues. But I think it is probably going to behoove us to recognize whether we think the $1.5 [million] contingency is sufficient, or not. If it’s not — which is, I think, a prevailing thought — then identify resources to add to that pot.”

Councilman John Chapman said: “We’re going to need to know more, and how the different services are changing, what the opportunities are, what the pros and cons of each of those opportunities are. It’s a little bit more than just looking at a pot of money.”

Staff will present more detailed information and council will consider the issue further at a work session on Wednesday, April 18. That session will focus on employee compensation and the Budget & Fiscal Affairs Advisory Committee (BFAAC).

NVJDC is located in Alexandria and is shared with Arlington and Falls Church. While it operates under an independent board, it receives funding and youth offenders from all three jurisdictions. But the center’s bed space is underutilized. Part of the excess capacity has gone to housing youths held under the auspices of the U.S. Department of Health & Human Services’ Office of Refugee Resettlement (ORR). These are non-citizen youths, largely teenagers, with no legal standing or guardian in the U.S., but who’ve nevertheless ended up here — for example, by getting caught crossing the border.

After its long-term federal contract expired in 2017, NVJDC decided to renew it for another year, through fall of 2018.

“When the ORR contract expired, I kind of thought that was going to stay expired,” said Wilson. “I was a little surprised, to be honest with you, that that came back. For a variety of reasons, I don’t particularly love that use. … Let’s be clear: we’re essentially running a youth immigration detention center here? I mean, we’re taking kids from the border and bringing them into Alexandria and detaining them?”

“In part, there is a portion of the detention center that does that, yes,” replied Mike Mackey, the state-appointed director of the Juvenile and Domestic Relations Court Service Unit. “They may stay in a program for weeks or even months … Some of them [ultimately] go to a relative in South Carolina or California or Iowa, and they get a sponsor or a shelter or something like that; some of them go back to their country of origin.”

“Are they doing it for financial reasons? … It would seem so,” asked Councilman Paul Smedberg. Mackey said he’s unable to comment on NVJDC’s rationale in renewing the contract.

Wilson said that NVJDC has dodged a larger conversation about repurposing or doing away with the center entirely: “We have in the past been, candidly, blown off in our efforts to have conversations with them.”

With greater joint interest from Arlington, “maybe we can make more progress in getting the [NVJDC] board to be more collaborative in trying to figure out what the long-term future is,” said Jinks. “In my mind, serving kids who are from another part of the country, who come here and go, does nothing for the local good over the long term.”