With Fairfax County looking at raising its real estate tax rate by 3 cents and Arlington County lowering it by a half cent, the main theme of City Manager Mark Jinks’ FY 2017 budget was surviving somewhere in the middle while providing funding to enhance schools, the fire department, and parking.

At a presentation of the budget to the City Council on Feb. 20, Jinks announced that the real estate tax rate will go up by 1 cent per $100 of assessed value, with the new rate set at $1.053. Jinks said the raise will bring in $3.8 million to help with the projected $5 million increased school enrollment cost in FY 2017 and the cost to make firefighter salaries more competitive.

In a way, the schools are both the year’s biggest winners and biggest losers. Jinks’ budget includes a $203.6 million transfer to the Alexandria City Public Schools, a $7.75 million increase over FY 2016, along with a $3 million School Enrollment Capacity Planning Contingent set aside.

In January, Superintendent Alvin Crawley proposed an operating budget of $256.7 million, with a requested $210.6 transfer from the city. However, since that time, Crawley reduced estimated lease costs by $3 million, leaving a $900,000 gap between the schools and city budgets.

Revenue sources for the FY2017 budget. 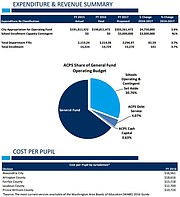 According to Jinks, the sole difference in their budgets was that the schools had requested $8.3 million in long term capital funds for a pre-kindergarten facility.

“Pre-K wasn’t in last year’s CIP planning,” said Jinks, adding that funding to a pre-kindergarten program that had barely begun planning would have been premature. Jinks said that the $900,000 gap between his budget and the superintendent’s was the closest the city had ever come in recent memory to fully funding the school’s proposal. The FY 2016 budget negotiations had started with a $3.2 million gap between the city and schools. “The glass is more than three-quarters full here.”

But Karen Graf, chair of the Alexandria School Board, said it was so close primarily because the schools had proposed the bare minimum of what was required, and that the pre-k program was a necessity for the schools.

“[Pre-K] wasn’t in the plan last year because we were working with the early education group to develop the plan,” said Graf. “We analyzed that if we took all of the pre-school classes out of our elementary schools ... we would be basically creating a new pre-school. We would open 700 spaces. It’s something we need to look at.”

But more than space requirements, Graf said that expanding pre-kindergarten programs has a proven effect on education at higher levels.

“It actually advances academics,” said Graf. “That’s researched. We already have pre-school throughout the division, but we want to make sure we expand that citywide to our most at-risk population. That’s the true mission, striving towards academic excellence for all, so there’s a fiscal argument and an academic argument.”

Among the other additions to the FY 2017 budget is a merit-based pay increase for city employees, totalling to $5.1 million, and a living wage adjustment to $14.14. The living wage has not been adjusted in Alexandria since 2008.

In FY 2016, one of the primary focuses was on improving police salaries. For FY 2017, the focus was on firefighters. $491,000 was allocated for a 2.5 percent pay increase for all positions on the fire scale, a move Jinks says will push Alexandria into the average for the surrounding jurisdictions. $448,000 went towards reclassifying fire officer pay, so lieutenants, captains, battalion chiefs, and deputy chiefs are all defined as officers and given a 5 percent pay increase.

“Having a competitive compensation package is critical to ensure we recruit and retain the highest caliber public safety employees,” said Fire Chief Robert Dubé in an email. “This proposed increase will assist in that effort.”

The budget also authorized overhires for the Alexandria Police Department to address demands for parking enforcement in residential zones. Jinks said that police speeding enforcement has been focused on areas where accidents happen most frequently, which tends to be in commercial zones, and that the overhires for the police are an effort to address speeding in residential zones that Jinks said has not been a city priority in the past. $284,067 was allocated for overhires, but Jinks said that the costs are outweighed by long-term benefits to the city.

“The overhires write more tickets each year than their salaries cost,” said Jinks.