A Little More For the City?
Votes

A Little More For the City? 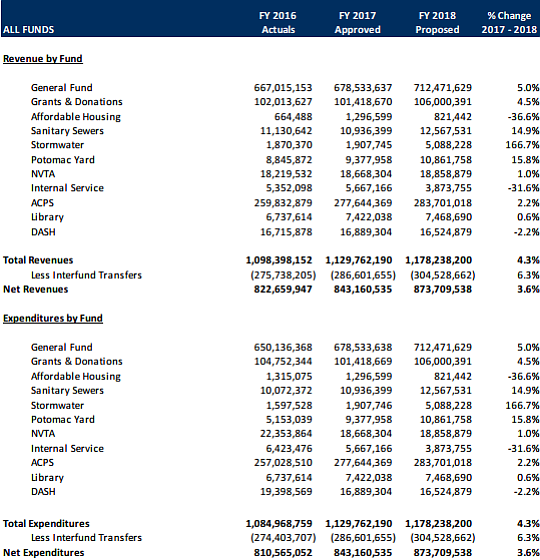 Check between the cushions on your sofa for loose change, because the city could use some help.

The City of Alexandria faces an increasing number of funding needs, but the tax base is not growing to keep up with the demand. As the city deals with the growing burden, the cost of that struggle will largely be placed on Alexandria residents. A tax rate increase, along with a series of new fees, are proposed to cover a budget that aims to maintain services and combat the city’s crumbling infrastructure.

While costs for the city have continued to rise, revenue has stagnated. Revenue in FY 2018 is projected to grow by only 1.6 percent. The real estate tax base is expected to grow just 2.1 percent in 2017 and 1.1 percent in 2018 while home values rise by less than 1 percent. In the calendar year 2017 assessments, two thirds of all residential properties either decreased in value or were unchanged. The office vacancy rate across Alexandria is nearly 19 percent, with 2 million square feet going un-leased. The situation is even worse in the West End of the city, where there’s nearly 40 to 50 percent vacancy.

The budget includes an increase in the real estate tax rate of 2.7 cents, from $1.073 to $1.10 per $100 of assessed value. This would increase the average homeowner’s tax bill by 3.5 percent, or $197 per year. This is the lowest dollar increase to the average real estate tax bill in five years, but there are other fees hiding behind that number.

A new stormwater utility fee to cover the state and federally mandated stormwater projects replaces a 1.1 cent increase to the real estate tax rate. The utility varies by property, based on the permeability of the property’s surface area. The average homeowner would pay $70 for the fee in the second half of FY2018, when the fee is implemented.

“Changing market standards and investment cycles require a reevaluation of the city’s policy,” said Jinks. “[But] this absolutely will not put the city’s AAA/Aaa bond rating at risk.”

The largest portion of the budget goes to employee compensation. The largest new item in compensation is $5 million to fund an annual merit increase for all eligible employees, an increase to the approximately 500 employees currently at the top step of their pay grades. The budget funds 2,564 total full-time equivalent permanent positions, a net decrease of one over the current number. Fourteen positions were decreased while 13 were created. Of those 14, six employees occupied positions that will be cut, half of those from Alexandria’s libraries.

The largest single new investment in the operating budget is $1.5 million to accelerate police hiring and fully staff patrol and traffic units in the Alexandria Police Department. Jinks said the hiring aims to expand the APD’s community policing program and support the city’s Vision Zero initiative to eliminate traffic deaths and serious injuries. The budget also helps the Alexandria Fire Department transition into dual-role firefighter/medic position. The budget funds a one time skill-based bonus of $5,000 and pay increases of $5,000 for firefighters or medics transitioning into the dual role.

For transportation, the biggest hurdle facing the city is the cost Metro improvements. The FY2018 fully funds the additional $7 million requested by WMATA over the current year, bringing Alexandria’s total operating contribution to $40 million. Jinks cited the Metro funding as a major driver in the proposed real estate tax increase, but said he believed the funding was an investment in the local economy. Roughly 95 percent of all new office construction in the region is within half a mile of a Metro station.

“By funding Metro at this higher dollar level, we can give him the resources he needs to build a safe, reliable and well-managed Metro system,” said Jinks.

At the City Council meeting on Feb. 21, Mayor Allison Silberberg said long term the region needed to come together to find a dedicated source of funding for the Metro.

Street paving for Alexandria will remain funded at current $5.3 million, though the city will have to cover $1.5 million more in the cost due to a reduction in state aid.

The proposed operating budget includes a $7.5 million increase to Alexandria City Public Schools, or 3.5 percent above the current funding. This falls short of the $9.6 million requested by Superintendent Alvin Crawley. The Capital Improvement Plan proposed by the School Board proposed that the city fund $611 million in school capital projects over the next decade, triple the amount ACPS was previously scheduled to receive from the city. The funds are requested for the replacement of the Minnie Howard campus of T.C. Williams High School, construction of a new middle school, and replacement and modernization of five elementary schools.

“While these are important projects, it is not realistic for the city to suddenly provide such an enormous increase in funding,” said Jinks. “For the FY 2018-2027 School CIP, I am recommending a substantial $144 million increase… This should be sufficient to build a new ninth grade center, a new middle school and eventually a new elementary school when enrollment increases justify it. The $194 million cost for the elementary school replacement and modernization ACPS has proposed cannot also be funded with the amount I am recommending … we cannot afford to add capacity and modernize at the same time.”

The additional funding for the ACPS Capital Improvement Plan was presented to the City Council as an unfunded supplemental CIP option.

ACPS released a statement hours after the budget presentation expressing dissatisfaction with the funding:

"This is not the budget that we had hoped for. There is no doubt that if this budget is passed without changes, it will directly impact schools in a negative way, both in terms of elementary school capacity projects and the modernization of our aging facilities, and in terms of supporting teachers and students in the classroom. We look forward to working with the city to resolve some of these issues."

On the capital side of the city budget, the largest cost is the greatly accelerated remediation of the city’s combined sewer outfalls likely to be required by the state legislature and related sewer separation and compliance projects. Bills have passed both houses of the Virginia legislature requiring Alexandria to accelerate plans to combat pollution into the Potomac River. The timeline for the required implementation remains in debate, but every case is sooner than the city had planned.

“I have proposed $386 million in the next 10 years towards these mega-projects, including nearly $2 million more than expected for accelerated planning in FY 2018,” said Jinks. “Revenue for these projects would come from a 30 percent increase in the sanitary sewer fee in FY 2018, with a projected increase of more than 500 percent to $8.84 by FY 2027. This would increase the average annual household bill from about $76 to about $477 over 10 years.”

Even this estimate is optimistic. Jinks said the plan assumes $54 million in state aid, similar to funding provided to Lynchburg and Richmond to address their combined sewer systems, but Jinks also acknowledged that the “environment in the state legislature” was different than when that aid was approved.

While Jinks expressed frustration with the state legislature’s timeline, Silberberg said the now mandatory sewer infrastructure work was also morally the right thing for the city to do.

The capital budget also begins to address the poor quality of many city structures: $324 million was identified as necessary capital maintenance to bring all city buildings into a state of good repair. The FY 2018-2026 budget includes $106.5 million for repairs and improvements, with significant funds for City Hall, the Alexandria Courthouse, and other city facilities.

“The vice got turned on city programs this year,” said City Councilman Tim Lovain. “If you back out compensation, spending will be down for city. The fact is there’s no more fat. There’s some pain in this budget.”

The City Council will hold 10 work sessions throughout the spring to review the proposed budget with city staff. There will be a public budget presentation on Feb. 23 at the Beatley Central Library, a special budget public hearing on March 13, and a tax rate public hearing on April 22.