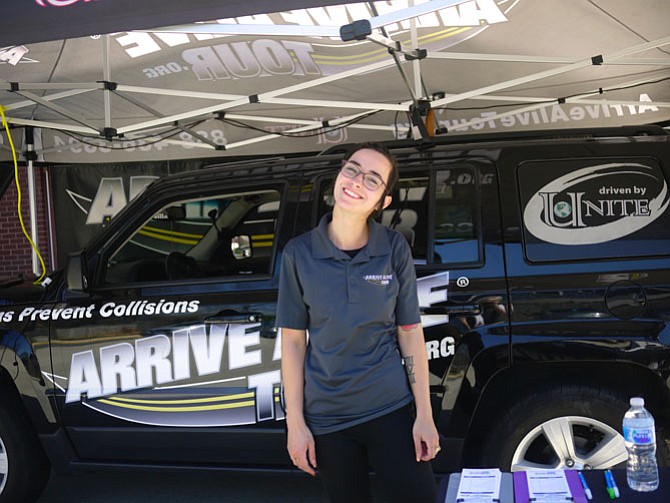 Meghan Yost travels around the country to bring this virtual experience to teenage drivers. At Yorktown High School, she demonstrated the equipment to 100 students; 60 were able to sit behind the wheel. Photo by Eden Brown. 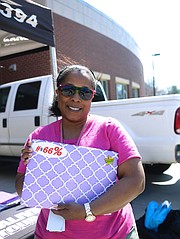 Teacher Stephanie Meadows applied for a grant in order to bring the Arrive Alive demonstration to Yorktown. Yorktown was the only high school in the area to get the virtual reality lesson.

Student Evan Fillmore sits behind the wheel as the instructor gives him pointers on how not to overreact on the road.

Almost every time a student got behind the wheel on Friday the 13th, it ended badly. The glass on the windshield “cracked” and the fun was over. The student sheepishly accepted the summons. “Arrive Alive” is a program that endeavors to show young people what driving under the influence of alcohol or other substances would feel like.

The high tech simulator makes the driver feel out of control on the highway, depending on “how much they’ve had to drink.” The facilitators point out that texting while driving is actually even more of a problem: six times more accidents occur due to texting than intoxication.

Stephanie Meadows, a Yorktown High School health teacher, applied for a grant to bring the Arrive Alive program to her school and emphasize other healthy behaviors. She tries to remind people that while the recent risk behavior survey indicated 33 percent of Yorktown students had tried marijuana, 66 percent had not. It’s important to emphasize that 66 percent of her students chose to live in a healthy way and provide the rationale for health-wise choices.

To get the message across to middle schoolers that doing drugs isn’t the way it has to be as they move into high school, she takes Yorktown students to WIlliamsburg Middle School and has them talk to the students about why they don’t do drugs. Her students can relate to the middle schoolers and when they tell them “it is not cool to try drugs,” they listen. Meadows applied for and received an “Innovative high schools” grant of almost $4,000 to pursue her programs.

Arrive Alive is part of the company UNITE, whose CEO, Patrick Degrasse, started the health and wellness organization in Michigan, because a favorite aunt was killed by a drunk driver. He wanted to do whatever he could to educate people on how impaired drivers become when they either become intoxicated or text while at the wheel. UNITE visits about 700 colleges, high schools, and community based events, and U.S. Navy locations each year to offer drunk driving and texting- while- driving simulators. UNITE has also introduced a National Bullying Awareness/ Prevention Program.

Some of the students walked away from their simulated “crash” crying foul because a car had pulled out too quickly in front of them — it wasn’t their fault. “That’s right,” said the facilitator. “But your reaction time was impaired by the alcohol, and when the police come, you will get a DUI charge — not the other guy.”