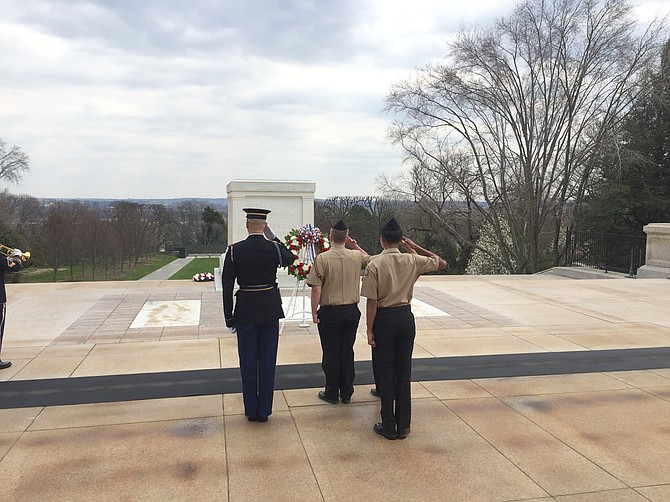 Saluting the Tomb of the Unknown Soldier. Photo contributed

Herndon NJROTC Cadets traveled to Arlington Cemetery to learn about some of the many heroes that have been laid to rest at this National place of honor and respect. The Cadets walked almost four miles around the cemetery visiting some of the gravesites they studied during the prior week. The tour started with a stop at the grave of Medgar Evers, a decorated veteran of WWII and a well-known civil rights leader. Next they visited Five Star General Omar Bradley and Robert Todd Lincoln before taking a long uphill hike to Arlington House, the home of Robert E. Lee before the Civil war broke out. A trip to Arlington is not complete without a stop at the eternal flame and burial site of the 35th President of the United States, John F. Kennedy. A number of other famous sites were visited representing the Civil War, WWII, and other famous Americans who made history. Rounding out the tour was a stop at the Battleship MAINE Memorial followed by the Challenger, Columbia and Iran Hostage Rescue Memorials and then finally the grave of Major Audie Murphy, the most highly decorated soldier from WWII. The most memorable event was saved for last, when three NJROTC Cadets assisted the Soldiers from the “Old Guard,” a unit of highly trained men and women who have the honor to guard the Tomb of the Unknown Soldier, to lay a wreath at the Tomb of the Unknown Soldier. The Tomb of the Unknown Soldier is guarded 24 hours a day, 365 days a year, and in all types of weather by Tomb Sentinels. Members of the 3rd U.S. Infantry Regiment, “The Old Guard,” have guarded the Tomb of the Unknown Soldier every second of every day, regardless of weather or holidays, since April 6, 1948.

Herndon High’s Navy Junior ROTC is for anyone interested in leadership experiences, teamwork, and/or high-level competition. There is no military commitment. To learn more about this program, contact David Adler, Captain, USN (retired) at dbadler@fcps.edu.