Remembering The Fallen in Arlington
Votes

Remembering The Fallen in Arlington 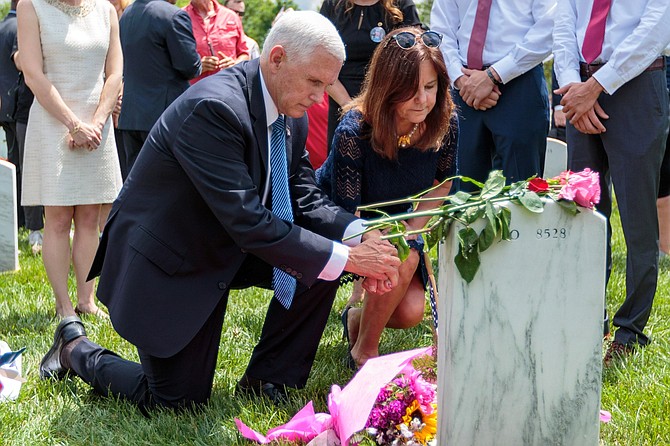 Vice President Mike Pence and his wife Karen lay flowers at the grave of Colonel Paul Kelly, who was killed in Iraq in 2007, in section 60 of Arlington National Cemetery on Memorial Day. Photo by Mark Mogle.

Courtney Jacobs hugs her son in front of her late husband’s grave on Memorial Day, May 27, in Section 60 of Arlington National Cemetery. Sergeant Chris Jacobs was killed in a training accident in 2011.

The family of Sergeant First Class Bradley S. Bohle of Glen Burnie, Md., visit his grave in Section 60 of Arlington National Cemetery on Memorial Day. Bohle was 29 years old when he was killed in Afghanistan in 2009. 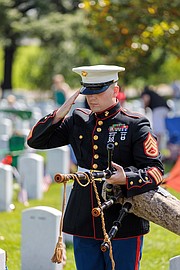 A Marine bagpiper salutes at the grave of a fallen comrade in section 60 of Arlington National Cemetery on Memorial Day.

Pence placed a wreath at the Tomb of the Unknown Soldier to remember deceased service members whose remains haven’t been identified and observed a moment of silence.

Following the wreath-laying ceremony, Pence and his wife Karen visited Section 60 of the cemetery, where they placed flowers at the grave of Colonel Paul Kelly, who was killed in Iraq in 2007. They met with several surviving family members, including former White House Chief of Staff John Kelly, whose 29-year-old son, First Lieutenant Robert Michael Kelly, was killed in action in Afghanistan in 2010.

President Donald Trump, currently on a State visit to Japan, and First Lady Melania Trump, visited the cemetery last week and placed flags at several gravesites as part of what is known as “flags in” day.