Memoir seeks to humanize the plight of the dispossessed. 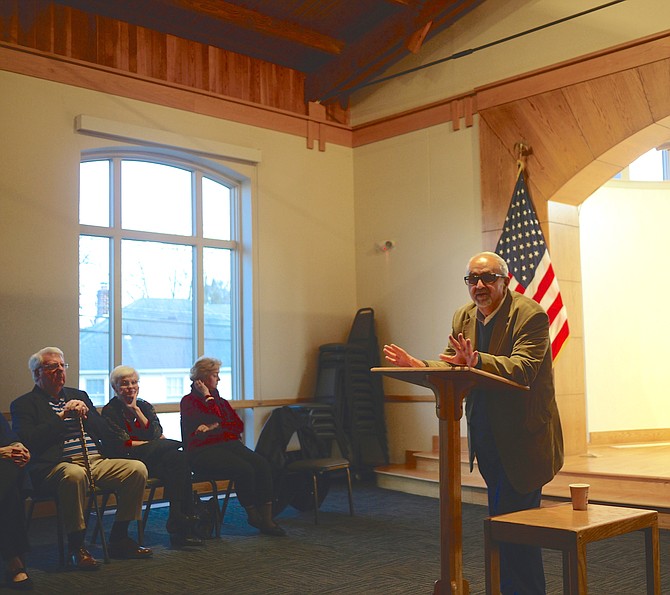 Dr. Bernard Sabella speaks to a group of 30 people at St. Mary’s Church in Arlington about Christian Palestinians being victims of Israeli policy. Photo by Eden Brown.

Dr. Bernard Sabella, a Palestinian Christian and professor of sociology at Bethlehem University, provided a first-person account about present-day life in Israel at St. Mary’s Church in Arlington, on April 18. He shared his first-hand impressions of living in a conflict zone, as well as his commitment to promoting peace through understanding.

Starting on a high note, Sabella talked about the cancer diagnostics initiative in Gaza. Palestinian Lutherans and an Anglican hospital were working to improve the effort to diagnose cancer for Palestinians whose access to health care was sporadic. Sabella talked about the well-established need, the funding to build a diagnostic center, and interactions with retired Ambassador Thomas Pickering, and former Vice President Joe Biden, two of the men who were helping this dream come true.

Sabella is no stranger to the U.S. He attended Franklin and Marshall College in Lancaster, Pa., and remembers having to deal with stereotypes about Palestinians then. He has recently published a book of memoirs about growing up in a divided land. He hopes that “when the page is turned, his grandchildren would know something about his family and how long they have lived in Palestine.” He and his wife, Mary, spent six years in the U.S. together before going back to teach at Bethlehem University. He reminded his audience that Palestinians are Christian as well as Muslim, Catholic as well as Episcopalian.

“Seventy percent of the students at Bethlehem University are women,” he said. “Seventy percent are Muslims. The Catholic bishop, seeing these numbers, asked us, ‘Should we keep this university open to teach Muslims?’” Sabella responded, “Absolutely.”

“We are really stuck in Palestine and Israel, Sabella said. “We have usually looked to the U.S. to stabilize relations between Israel and Palestinians. I’m here to tell you, when you look at Israel and Palestine, you are looking at a very small country. It’s no bigger than the state of Rhode Island. There are six and a half million Jews and one and a half million Arabs. Land is scarce.”

“My own family was dispossessed of their land,” Sabella said. “Christians and Muslims both have suffered. Mary and I know a couple of Israeli professors who are working with us. They aren’t at all religious. They are modern, liberal. They aren’t adherents of the theory that God ordained that Israelis should live in Israel. God is not a real estate agent. If they don’t want to give up their land — formerly Palestinian land — it is not because of the biblical story but because they are attached to their land. Palestinians say: we are as attached to our land because we have been here since the seventh century.”

“I’m a sociologist,” said Sabella. “I know for a fact we cannot continue to fight each other. Before too long we will have around 22 million people in Israel. We will have 2 million living in 210 square miles of Gaza. So you cannot come to us without a solution.”

Touching on the problem of Jerusalem, Sabella said it was a very complex city. Palestinians can go to Israeli hospitals in Jerusalem, and Israelis can go to old Jerusalem to shop. Jews, Christians, Muslims live there together.

“What I learned from my parents, because they would sit together and drink Arabic coffee and talk about having been dispossessed from their home in 1948, was that they would never express animosity. They believed that we are both victims, Israelis and Palestinians.”

That said, Sabella addressed the death of Yasser Murtaja, the 19-year-old freelance photographer on the Israel-Gaza border on Friday, April 6, and another incident of shooting children who were watching Israelis. Anyone paying attention to these events could see that the Israeli military's assertion that its soldiers do not target Palestinians unless they pose a threat is not accurate, he said. It becomes a moral and ethical dilemma. “How do we allow ourselves to go on killing each other?”

Sabella said when he travels to the U.S., he hears: “You Palestinians don’t want peace.” But Sabella reminds Americans that John Kerry made 14 round trips back and forth to Israel to attempt to establish peace. It wasn’t the Palestinians who got in the way, it was the settlements the Israelis cannot abandon. “There are 1.8 million Arabs with Israeli passports, but their rights are not the same. The Israeli government budget allocations are different. There is less infrastructure for the Palestinians. The Israelis are allowed to shoot Palestinian sheep, or burn olive trees. There is one standard of justice for Jewish settlers, and another one for Palestinians.”

Sabella closed his talk with a plea to the United States to be an honest broker, and for U.S. citizens to urge their leaders to be more proactive. They should ask, “Are we playing the role we should play in the Middle East? We can’t live with no peace process. If we Palestinians fail we all fail, and we will all pay the price. We need a joint vision for the holy land.”

The U.S. needs to get Israel to understand that a long term solution is imperative, he said.

Members of the church who had travelled to Israel last year with the Rev. Andrew Merrow commiserated with Sabella. “I had no idea until I got to Israel when we went with Father Andrew last year that Palestinians are issued different license plates in order to be able to identify them as they circulate,” said one parishioner.

Dr. Sabella’s most recent book, “A Life Worth Living,” is available in paperback on Amazon.com.