It takes a community to build a dock.

Design drawing of the new Lakeport dock, shorter in length than the old one and having a floating dock to launch smaller boats safely. Image provided by Lakeport Cluster Association

A support beam no longer fully rests on a piling at the Lakeport dock. It is twisted and compromised.

The retaining wall is in need of immediate repair. 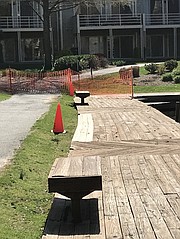 Thirty years ago when the dock was first built, it abutted straight and paralleled the bank. Over time, erosion, deterioration, and the elements warped portions of the wooden dock from its original site line.

Paul Renard, Lakeport Cluster Board Vice President and Chair of the Dock Oversight Committee, agreed to an interview and site walk on Friday, April 20, 2018, for the new Lakeport Dock Project. Renard’s first words were to credit all the people who came together and shared their talents, skills and time to help make the project a new reality. Renard emphasized the credit goes to them. Without everyone, the Lakeport Dock Project and repairs to the nearby bulkhead, would not be where they are today.

"The project should hopefully begin within the next two weeks," said Renard.

Nearly three years of hard work, community involvement and input produced a design and engineering specifications for a beautiful and safe boat dock, one with rock-solid stability and long-term life expectancy. Renard explained there would also be a floating dock that would make launching small boats easier and safer.

THE REASON behind the project, the dock demolition and construction of a new dock as well as fixing a failing retaining wall between Lake Thoreau and a hillside, is simple. Wind, water and sun may make the scenery and the Lakeport Cluster community a great place to live, but the elements deteriorate wooden structures.

A close inspection of the dock revealed among other failures, splintered and rotted wood, popped nails, pilings not driven far enough into the ground or rock below the water, and deck framing not resting on the pilings.

The high drop from the dock down to the water to launch a boat appeared to make the maneuver difficult and possibly unsafe. Farther down the dock, the retaining wall between Lake Thoreau and a hillside was failing. Walking back down the long dock, the lighting on the adjacent path was broken, vandalized. Renard reported other bollards had deteriorated. He acknowledged there was a dark corner on the lakeside path without any lighting. At the very end of the dock, water cut under an eroded wedge of land.

Renard shared that all concerns would be addressed in the project with new construction completed or remediation. Renard said that in the design plans, the old dock would be demolished. The new structure would include a floating platform for launching smaller boats more safely and comfortably. Renard said almost all the old pilings would be removed and new pilings driven to a significantly deeper depth.

An underground crushed stone barrier and silt screen would be built along the shore to protect the new dock and the lake, Renard said. The bollards would be replaced and the new one(s) installed in the dark area.

As for the eroded split of land that abutted the dock, bio-logs would be placed there to change the slope and reduce erosion. Invasive species would be removed and new plantings brought in to improve the water quality. "Much of this work will be done by community volunteers," said Renard.

RENARD said that they began the process of designing the new dock and selecting a contractor over three years ago. About four months ago, the Reston Design Review Board approved the design. Two months ago, a Virginia Class A contractor was selected and placed under contract. The project is currently in the permit approval process with Fairfax County. Renard commented the process is "taking longer than expected since the County is treating the dock as a commercial structure because it is being constructed by an HOA rather than an individual."