Cappies Review: In Search of Moral Compass in Fairfax
Votes

Cappies Review: In Search of Moral Compass in Fairfax 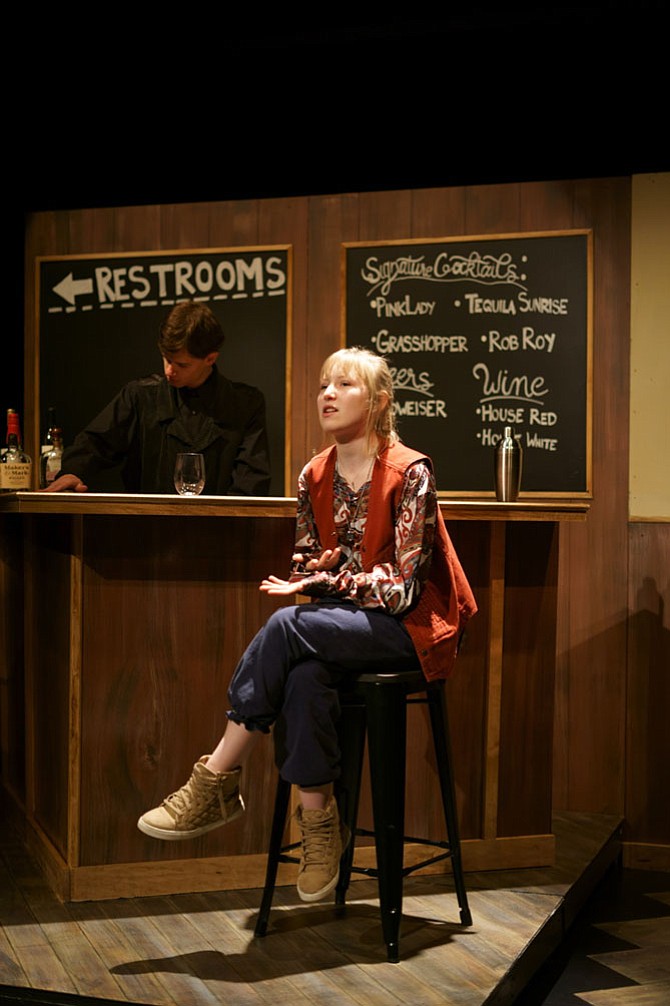 Joe Neff and Mary Beth Doebel in The New School's production of ‘Kennedy's Children.’ Photo by Lucas Yan/student at The New School

"Have you seen my moral compass?"

These are the first words to catch the eye upon entering The New School's black box theatre, before any actor has even taken a breath to speak. They are written on one of many vibrant 1970-esque posters adorning a wood-paneled wall that has been grained with care behind an authentic-looking bar. It is an intimate setting for the intimate show, “Kennedy's Children” by Robert Patrick, a show composed entirely of monologues. It weaves together the stories of five people who have seen the world and the lives they hoped for crumble at the hands of the 1960s.

In a black box theatre, every audience member's eye becomes that of a critic. Such proximity to the performers requires much more attention to detail in terms of both the set as well as the stage business, as you can't brush off errors with a "They won't be able to tell from the stage." The set design has not only acknowledged this challenge but has used it to its advantage, as is visible in the messy neatness of the chalkboard menu, the intended cheapness of the bar itself, the period-appropriate posters and the drinks in the characters' glasses, wonderfully appropriate to each.

Standout and heart of The New School's production is Ethan Ocasio, who in the character of Sparger has been given the platform to display the fullness of his acting ability. Ocasio did not let a single line go to waste, from the sarcastic comments delivered with brilliant comedic timing to traumatic recollections, he smoothly demanded the attention of the audience with the discernable comfort of a seasoned actor.

Another notable performance came from Annie Kraemer, who portrayed Carla, a Marilyn Monroe-wannabe. Kraemer did a wonderful job differentiating her character from the other females with marvelously dainty stage business and a sophisticated, breathy speech pattern maintained solidly throughout the entirety of the show. Even more impressive was her believable devotion to dated, and at times taboo notions, leaving her monologues enjoyably conversational.

Though “Kennedy's Children” only chronicles five stories, a sixth, silent actor (in this case, the charming Joe Neff, the Bartender) never leaves the stage. Neff performed commendably with the difficult task of being an actor-prop hybrid; his stage business was authentic but not distracting, and the premeditated nature of his business was evident in its variety.

As an ensemble, The New School's cast of “Kennedy's Children” was small, but fierce. The collective emotional arc contributed to by all the actors was a lovely and clearly conscious messa di voce, and the difficult subject matters were handled by these young actors with exceptional poise. The cast's cohesiveness echoed that one question through the wood-paneling, the black box, into the parking lot and the minds of audience members on their way home.

"Have you seen my moral compass?"