People: To Fairfax Station, with Love

Fairfax Station native serves with the U.S. Navy half a world away. 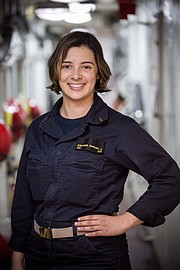 A Fairfax Station native and 2012 Lake Braddock High School graduate is serving in the U.S. Navy forward-deployed aboard USS Blue Ridge. Ensign Margaret Bumgarner is a surface warfare officer aboard the ship operating out of Yokosuka, Japan. The ship routinely deploys to protect alliances, enhance partnerships, and be ready to respond if a natural disaster occurs in the region.

A Navy surface warfare officer is involved in virtually every aspect of Navy missions. They are trained extensively to operate ships, their crew and their systems.

Bumgarner is proud to serve in the Pacific and fondly recalls memories of Fairfax Station.

“Diligence in work is what I bring to the Navy from my hometown,” said Bumgarner. “I am very driven by my job.”

Moments like that makes it worth serving around the world ready at all times to defend America’s interests. With more than 50 percent of the world's shipping tonnage and a third of the world's crude oil passing through the region, the United States has historic and enduring interests in this part of the world. The Navy's presence in Yokosuka is part of that long-standing commitment, explained Navy officials.

USS Blue Ridge serves as the flagship for the U.S. Seventh Fleet. It is one of only two U.S. Navy command ships in the world, providing command and control for fleet commanders.

“Being forward-deployed I think is an amazing opportunity that not a lot of people get the chance to do,” said Bumgarner. “Japan is an amazing country to learn a ton of things from. The best part of being at this command is the people.”

As a member of one of the U.S. Navy’s most relied-upon assets, Bumgarner and other sailors know they are part of a legacy that will last beyond their lifetimes providing the Navy the nation needs.

"The Navy has given me more confidence and made me more humble,” said Bumgarner. “Serving in the Navy to me means giving back to a nation that has given past generations so much and now it’s my turn to do same.”

Seventh Fleet, which is celebrating its 75th year in 2018, spans more than 124 million square kilometers, stretching from the International Date Line to the India/Pakistan border; and from the Kuril Islands in the North to the Antarctic in the South. Seventh Fleet's area of operation encompasses 36 maritime countries and 50 percent of the world’s population with between 50-70 U.S. ships and submarines, 140 aircraft, and approximately 20,000 Sailors in the 7th Fleet.