All In On Affordable Housing in Alexandria
Votes

All In On Affordable Housing in Alexandria 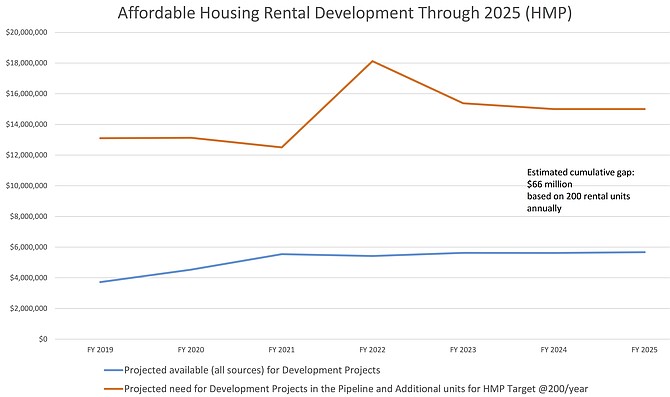 The city government estimates a $66 million shortfall to meet the Housing Master Plan’s goal of preserving or creating 2,000 affordable units by 2025.

Budgets aren’t crafted overnight. They’re year-long processes made up of hours and days of back-and-forth discussions. But occasionally there’s one moment where the city’s future is shaped by one conversation. An add/delete work session on Tuesday, April 24 was one such moment, and the ramifications could shape the city’s budget and affordable housing plans for years to come.

On the table were two proposals, one from Vice Mayor Justin Wilson and another from Councilman Willie Bailey. The Wilson Plan created a new multi-year Capital Improvement Program project to support Alexandria’s affordable housing. The plan would provide a $2.35 million increase in Affordable Housing funds in FY 2019, and set up a five-year phased project to reach the Housing Master Plan’s 200 unit annual preservation/production goal. The fiscal impact beyond the FY 2019 is yet to be determined.

The Bailey Plan would create dedicated funding in the CIP, with $4.75 million set aside each year from FY 2019 through FY 2023.

Both plans would be funded by a one percent increase to the city’s meals tax from 4 to 5 percent.

In March, the Chamber of Commerce wrote to Mayor Allison Silberberg opposing the meals tax increase and encouraging “council to find a way to incorporate affordable housing into the city’s long-term planning and overall budget.”

The letter included a survey of chamber members on the issue. One respondent said: “The city should learn how to use our taxes more wisely and economically before we give them more money.”

COUNCILMAN Paul Smedberg argued for Wilson’s plan, saying that reviewing the affordable housing budget in each year’s CIP was more stable in the long term. Smedberg noted that affordable housing projects in the city are funded through various proposals, like the Church of the Resurrection project, which have varying levels of cost. Smedberg and Wilson argued that assigning a set amount of funding to affordable housing wasn’t an economically safe choice.

“The question around dedicated funds is a philosophical difference we’ve litigated up here in the past,” Wilson said.

The City Charter also allows the city manager to propose alterations to any tax in his or her proposed budget.

Wilson’s add/delete proposal would remove affordable housing’s 0.6-cent dedicated real estate tax and increase the meals tax, for a net of $2.35 million in FY 2019. He says council would ask City Manager Mark Jinks next year to bump up funding to meet the Housing Master Plan’s goals. He favors this approach in part because it “gives some real estate tax relief, which is obviously also a component of affordability.”

Wilson summed up the difference between the two proposals: “I’m proposing a stair-step, using what is essentially a real estate tax reduction in this year, as well as an increase in the dining tax, to get there. Councilman Bailey’s proposing a quicker ramp-up to get to that funding level.”

For others on the council, the needs of the city’s affordable housing crisis warranted a dramatic response.

“Truthfully, I don’t care how we get there,” said Bailey. “I’ve said it a thousand times and I’ll say it a thousand more, I’d fall on my sword for this issue.”

Bailey argued that all other issues in the city, from infrastructure to schools, were secondary to being able to afford a place to live in the city.

“The need does not fluctuate between less and more; it becomes more and then more and then more,” he said. He wants to ensure the city has “money ready for the next project.” By dedicating funding, “we are preparing the next council to do the best that they can as it relates to housing.”

Neither proposal closes the present gap. A December memo from Jinks identified a $66 million shortfall to meet the Housing Master Plan’s goals by 2025. That works out to $9.4 million per year on average, including FY 2019.

“Imagine being a child without a set address,” said Councilwoman Redella “Del” Pepper. “It’s demoralizing. It’s a heck of a hard way to start out your life, and as a senior it’s a hard way to end your life. I don’t care much for dedicated funds, but affordable housing issue is so terribly important that it’s time to put our money where our mouth is. I think we need to go that route.”

Nothing was voted on at the meeting, but even Wilson noted that the majority on the board seemed to favor the Bailey plan.