In the Red
Votes 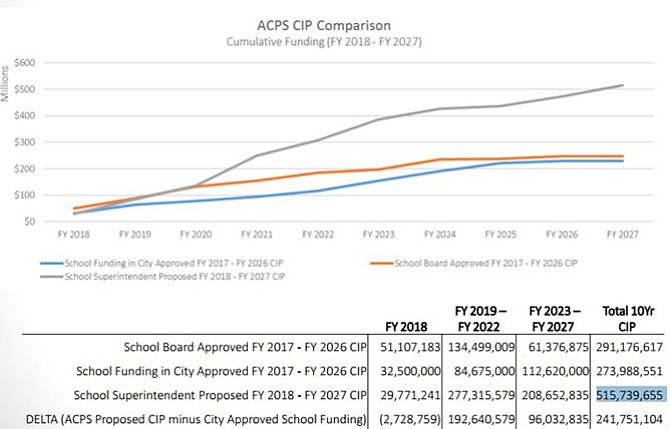 Alexandria — For the City Council, the largest looming issue in the upcoming months of 2017 is always the city’s budget. The routine is fairly similar year after year: the city and school system haggle to a compromise over expanding school enrollment costs while other city departments rotate through yearly budget increases and decreases. But this year, according to the City Council, the budget process is shaping up to look a little more dire than usual.

“The budget is going to be a very big deal,” said Councilman Timothy Lovain. “It always is. It's our main business, but it will be particularly challenging with Metro needs, school needs, and other infrastructure. Those capital needs are critical to the future of the city. We need to address them as best we can.”

While school capacity needs generally take the largest focus in the budget discussion, this year a Metro system in crisis and crumbling city infrastructure are muscling into the spotlight. The issues being discussed and weighed aren’t new, but Councilman Paul Smedberg says the scale of the demands exceeds previous years.

“We’ve had these issues before, but the dollar amounts and the size is bigger,” said Smedberg. “Schools, infrastructure, and transportation are all core to what we do. How we prioritize the rest is what we have to decide.”

Across the council, schools, infrastructure, and transportation are agreed to be the core budget priorities in 2016.

“Blooming student enrollment in the schools also presents a real challenge,” said Lovain. “It largely shows up for us in school construction funding needs. It’s a happy problem, it’s a compliment to our system, but we’re adding so many students. There’s a structural deficit we face. [Our] needs are growing faster than revenues. That shows up on the capital side and for schools.”

But Vice Mayor Justin Wilson warned that school capacity needs aren’t only going to impact the capital budget, but will include increased costs to the operating side of the budget as the larger schools need more teachers and administrators.

But rising Metro subsidies for Alexandria to pay for repairs and maintenance could play a major part in this year’s budget. On Oct. 30, 2016, Metro General Manager/CEO Paul J. Wiedefeld proposed a $1.8 billion budget, with a projected $39 million increase in contributions from Virginia. Alexandria faces a proposed subsidy increase of $6.5 million, from $33 million to $39.5 million.

“The Metro costs are largely operating expenses as well, a real serious deficit,” said Lovain. “They have to pass the hat to local jurisdictions, so that will be a major cost driver. With schools and Metro, those show up in capital but also in operating budget as well.”

Moving forward, Smedberg said the region is going to have to look at how to deal with funding sustainability for the Metro.

For Mayor Allison Silberberg, “[We have to] push harder for a dedicated revenue stream for WMATA,” said Silberberg, “specifically federal support and a regional sales tax.”

Beyond the budget, Lovain noted that changes to the Metro in Alexandria are underway, even if items are not being brought before the council. In particular, Lovain said work on the Potomac Yard Metro Station are ongoing but aren’t items the council will be voting on.

Finally, for many on the City Council, the city can no longer afford to put off delayed infrastructure investments. An FY 2015 City Facility Condition Assessment found that the average city-owned building scored a Grade C on the facility condition index. Eight, including City Hall, ranked as an F. According to a staff report, bringing these facilities to Grade C would cost $101 million.

“The biggest priority is how we address deferred infrastructure work and the deferred capital maintenance,” said Wilson. “For us, that’s going to be dealing with school capacity, sewer, municipal buildings; the whole collection. These are capital investment we’ve deferred for far too long.”

Behind those three priorities, Silberberg and others on the council said the city will also need to focus on pedestrian-related issues in Alexandria.

“We need to focus on public safety in terms of speed and stop sign enforcement,” said Silberberg, “and [we need to look at] lowering speed limits on certain streets to 25 or 30 miles per hour.”

In the middle of budget season, Chapman noted that pedestrian safety will be one policy issue that continues to be discussed in early 2017.

“We haven’t heard the last on pedestrian safety,” said Chapman. “That’s going to be a big topic we have to tackle. Once winter season is gone, more people will be out and walking, there will be more interaction and I think pedestrian safety is going to come up as a bigger issue in the spring. In the spring, hopefully we can make a real difference on the pedestrian safety issue .… We have allowed people to drive however they want without real consequence. I think some decisions we made in terms of code change will hopefully help get people to understand how necessary it is for them to yield. Hopefully as we go forward, talk more to state legislature about what we want to see in terms of help they can provide.”

In addition to pedestrian safety, several on the council cited affordable housing as a large issue just below the big three for the FY2018 budget.

“We also need to maintain our public health and social [programs] given that the state and federal levels [seem to] be pulling back,” said Smedberg. “We also have to maintain funding for affordable housing. We need to figure out how to make that sustainable. Those are issues that are right beneath the surface, but they’re still big issues. For some people, those are the main issues.”

Across the dais, Councilman Willie Bailey is one for whom affordable housing is a top priority for the city.

“A lot of folks don’t think about the big picture on [affordable housing],” said Bailey. “The affordable housing is the root cause for a lot of issues for residents. Even the children’s advocacy organizations pick affordable housing as a key issue. The past year has been pretty good. We’ve been doing a good job finding ways to provide more affordable housing, [the redeveloped] Carpenter Shelter being one. I don’t think we’ll ever get back to having as many as we did, but every little bit helps. We need to think outside the box.”

“We need to keep a watchful eye on how federal levels will affect the locality,” said Pepper. “I’m worried what [Trump’s] priorities are and how that will impact the country, particularly Alexandria.”

As the local budget continues to swell and assistance from the state and federal governments seems less and less likely, some on the council said the city is going to need to take a look at a major long term economic shift for Alexandria.

“We need to look at handling economic transition, particularly with changes in Washington,” said Wilson. “Have to redouble our efforts to build an economy that’s less dependent on federal spending. We’re going to see dramatic change in the federal government. Whether you agree or not is irrelevant, it's a big impact on our region. We have to build on our focus areas. We have clusters of life-sciences and innovation sprouting out of National Science Foundation and PTO. I think that’s an area we can build on.”

“With vacant commercial properties … a lot of times we want anyone in these spaces, but we also have to be strategic about it and build on what’s been successful,” said Wilson. “In some areas, have to ask ‘will that office demand ever come back?’”

But in the short term, it’s clear some city departments and needs will be harder hit than others. As far as what budget items will suffer cuts, Smedberg said he would need to wait to see what the city manager proposes.

“[After the budgets] from the last four or five years, there’s not much fat left in these departments,” said Smedberg. “I know it doesn’t look like it, but we’ve done a lot trimming.”

“We’re not going to be able to make everybody happy,” said Bailey, “but we were elected to make hard decisions.”