Stories Of Valor in Alexandria
Votes 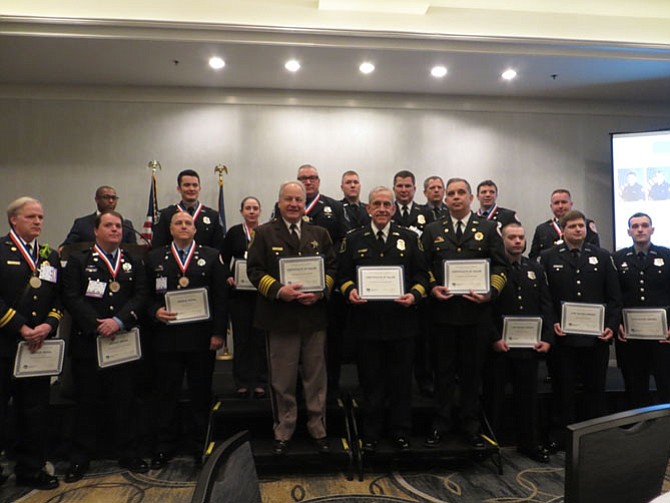 Police officers and firefighters who responded to the shooting at at Eugene Simpson Stadium Park on June 14, 2017. Photo by Vernon Miles.

From left: Fire Chief Robert Dube, FF Daryoush Hematti, FF Travis Daniels, FF Ashley Whisonant, FF Joseph Porcelli. Not pictured: FF Eric Vafier and FF Joseph Beavan. These firefighters put themselves at risk as they worked through a home with hoarding conditions to rescue an adult female victim and an adult male victim from a burning building. Both civilians died as a result of their injuries, but the crew of Engine 209 and Truck 209 were awarded Life Saving Awards for their efforts. 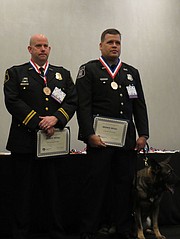 Lt. Matthew Weinert (left) and K9 Officer Carlos Rolon with Zigzag. Not pictured: Detective Keith Burkholder. Officers pursued a murder suspect from Prince George’s County to the parking lot of the Hilton hotel. Officers cornered the armed suspect before he could enter the hotel and were able to take him into custody. All were awarded Bronze Medals for their actions. 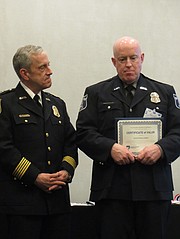 Police Chief Michael Brown (left) with Officer Daniel Caniff. Canniff was off-duty in his apartment when a fire alarm was triggered, with smoke emanating from an apartment of an individual with an ongoing mental health issue. The subject fled when the fire department entered the apartment, and Caniff was able to pursue and subdue the subject without any police equipment.

From left: Police Chief Michael Brown with Officer David Daniels, Officer Chuck Young, Officer John Brattelli, Officer Raymond Golden, Officer Steven Moffa. Officers responded to a shooting and were able to stabilize an injured man before using his information to locate and arrest the suspect in a shooting. Golden received a Life Saving Award, while the other officers received Certificates of Valor.

Sheriff Dana Lawhorne (left), Deputy Brian Wade (center), Deputy Gerald Wooden. Wade and Wooden found an inmate lying on his side with open and bloodshot eyes. A wire was found around his neck, and both deputies performed life-saving measures that ultimately rescued the inmate from an attempted suicide. Both received Life Saving Awards.

From left: Police Chief Michael Brown, Officer Reid Hudson, Officer Anthony LaRusso, Sergeant Daniel Gordon, Officer Bryson Norris, Officer Douglass Serven II. Not pictured: Sergeant Gregory Holden. Officers responded to a shooting at the Extended Day America Hotel. One woman was found in the parking lot, and two more gunshot victims were found inside in a bedroom. The male victim in the bedroom died, the female victim was paralyzed and the woman outside survived. All officers received Bronze Medals.

Sheriff Dana Lawhorne (left) and Deputy Sheriff Myrna Juarez. Juarez was driving to work when she witness a motor vehicle crash. The only one on the scene, Juarez instructed passengers in stabilizing a wounded passenger while she attempted to stabilize him. The injured passenger did not survive, but for her actions Juarez received a Life Saving Award. 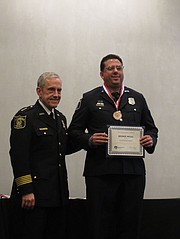 Police Chief Michael Brown (left) with Officer Richard Sandoval. Not pictured: Officer Suzanne Watts. Both officers were dispatched to a call about a disorderly male smashing car windows. On their arrival, Watts was attacked by the suspect. Watts was able to discharge her weapon to cease the attack despite a head wound. On arrival, Sandoval charged at the assailant and was able to subdue the assailant. Watts was awarded a silver medal, while Sandoval was awarded a Bronze Medal.

From left: Police Chief Michael Brown, Officer Westrick McIlvain, Officer Constance Kniesler, Officer Joel Hughes. Not pictured: Sergeant Jeff Stovall. Officers searched for a man who reportedly intended to kill himself by jumping off of a bridge. The suspect was contacted by cell phone but repeatedly hung up. However, the bridge in question was able to be determined and officers were able to find the suspect and talk him away from the railing. Stovall and Hughes received Life Saving Awards, while Kniesler and McIlvain received Certificates of Valor.

From left: Police Chief Michael Brown, Officer Michael Izzi, Officer Michael Matteson, Medic Remi Howell, Medic Brett Buehler, FF Karl Kappelman, Police Chief Robert Dube. Officers responded to a welfare check where they found a male subject lying on a couch repeatedly stabbing himself in the throat with a kitchen knife. Officers ran towards the subject and were able to take control of the knife. Officers began taking life-saving measures and were able to control hemorrhaging until medics arrived. The difficult medical procedure was successfully performed and the subject’s life was saved, at which time a nearby deceased female was located and the case was classified as a homicide.

Fire Chief Robert Dube (left) with FF Jason Sharpe. Not pictured: FF Arash Hematti. Firefighters responded to a fire in a townhome where they learned from neighbors that a resident that had left the home had run back inside. Rushing inside the building, they located the woman lying on the kitchen floor and were able to remove her from the building and perform life support care. Hematti and Sharpe were awarded Life Saving Awards.

With more than 60 honorees, the 2018 Valor Awards, presented by the Chamber of Commerce on April 19, were a record year for celebrating heroism and dedication among Alexandria’s first responders. From rescuing citizens from a bridge’s edge to stepping in to save another officer from an attack, the Valor Awards celebrated actions taken throughout 2017 that saved lives in Alexandria. Of particular note were the police officers and firefighters that responded to the June 14 shooting at Eugene Simpson Stadium Park where members of Congress were targeted.