Giving Back with A Simple Gesture
Votes

Giving Back with A Simple Gesture 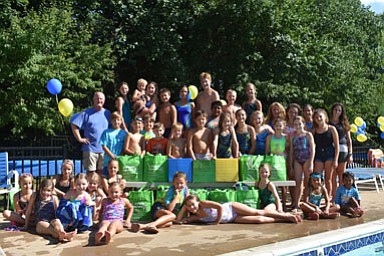 Reston — The Shouse Village swim team closet houses all kinds of items, from folded-up bed sheets with spray-painted team slogans to large canopies that provide shade for the swimmers. This summer, the closet also became a storage location for more than 300 pounds of canned goods.

“There is a giant box in the closet that is more than two grown men can pick up right now,” team spirit leader Melissa Carey said.

Saturday, Carey announced the donation total at the swim team end-of-season banquet. Due to the generosity of Shouse families and that of visiting teams, this Vienna team helped stock the shelves of food pantries through A Simple Gesture.

In June 2015, Reston resident Bob Schnapp started A Simple Gesture locally after he came across an article about the nonprofit in California. He began with about 20 members of his congregation, Shoreshim, then expanded by word of mouth to friends and neighbors. The nonprofit seeks to make it simple for local donors to provide food for people in Reston, Herndon and surrounding areas.

“They’re our neighbors. We’ve got extra resources, why can’t we help them?” Schnapp said. “Somebody said to me, ‘Well, people here are very generous, all you have to do is make it easy.’ And this makes it easy.”

The first step to becoming a donor is signing up online on coolgreenbag.org. Donors will then receive a cool, green bag, fill the bag with nonperishable foods and leave it outside their house on designated collection days every two months. Volunteer drivers from A Simple Gesture pick up the donations, leave new green bags for the donors and bring the contributions to various local food pantries.

“It’s striking that in this part of the county, where people seem to have so much, we still have hunger,” A Simple Gesture volunteer Bob Park said. “There’s a simple way to help ease that problem.”

While food pantries receive a lot of donations during the holiday season, contributions tend to go down at this time of year. A good thing about A Simple Gesture, Schnapp said, is that it addresses this lull in donations by providing “a steady stream of food all year round.”

Schnapp said he has found people to be very passionate about alleviating hunger. Now, 900 local donors are signed up with A Simple Gesture in Reston, and since the nonprofit’s start, this community has collected 80 tons of donations. Schnapp said the residents of Reston want to help people who need it.

“A little-known fact is that everybody else in Fairfax County fought having the Embry Rucker shelter in their area. Reston asked for it,” Schnapp said. “And that’s the kind of people that live here.”