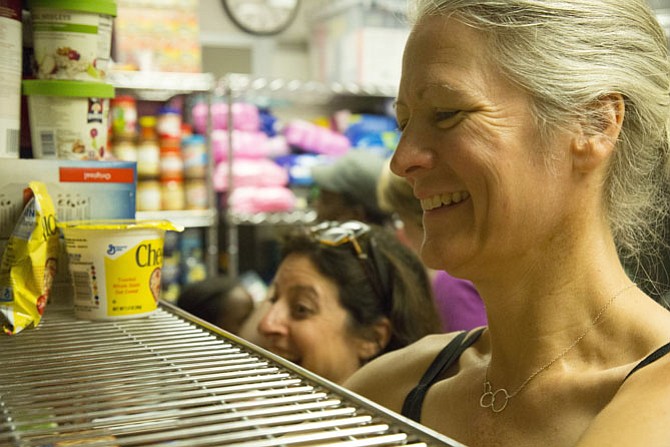 The South Lakes High School PTSA Food Pantry provided guests with fresh produce this summer that it gleaned from the Herndon Farmers’ Market. During the summer, students and their families could pick up two bags of food and toiletries each Thursday, 3-6 p.m.

On a summer afternoon in July, people are bustling in and out of Room 372 at South Lakes High School. Members of the school’s parent-teacher-student association transformed the room into a food pantry last school year and decided to keep it open throughout the break to keep students in need from going hungry during the summer.

Since March, the pantry has served about 100 students and their families and more than 350 people have come through its doors. At two bags per guest, that is more than 700 bags of food and counting.

Gosling, Shaw and parent Ronni Levine were volunteering on the afternoon of Thursday, July 27, organizing donations and distributing food and toiletries.

“It’s a community thing,” Shaw said. “Everyone is excited to plug in and get involved.”

The pantry has received great support from the community:

“Every week, we put out a call for the things we need [in the school’s newsletter], and by the next week we’ve got plenty of it,” Gosling said.

Gosling and Shaw were nervous about running out of supplies during the summer because the students weren’t in school, but they always found “a ton of food” waiting for them to collect from the main office, which people dropped off during summer office hours.

“The community has just been amazing,” Gosling said. “Sometimes I cry when I come here.”

During the school year, students pick up shopping lists that are available in English, Spanish and Arabic. The students then drop off their list on Thursdays in a box.

“There’s an anonymous box and it’s by their student ID number, so they don’t have to put their name on it,” Shaw said.

VOLUNTEERS then come in on Thursday night and Friday morning to pack the bags for the students, which are picked up on Fridays at the end of the school day.

“They pick up their bag by student ID and they just kind of walk through and walk out the door,” Gosling said. “They get to walk right to the buses, so it’s pretty anonymous.”

“We just line everything up by student ID and we have volunteers that help kids pick ‘em up and they head right out to their bus,” Shaw added.

Gosling and Shaw describe Kimberly Retzer, the high school’s principal, as a “super cheerleader and champion” of the pantry.

“She helps send a text out every week to remind the kids to turn in their slips and she tweeted,” Gosling said. “She’s totally into it.”

Students participating in the high school’s Work Awareness Transition program collect food donations from the main office, check for expiration dates, inventory and stock the shelves of the pantry, according to Shaw.

Excitement for the pantry spread beyond the walls of the school.

“People just on their own had big birthday parties — like 50th birthday parties — and just asked people to bring donations for the pantry instead of presents,” Shaw said. “So, the whole front office was just full of food after these parties, which was just awesome.”

The PTSA parents who helped start the pantry hope it goes strong well after they leave.

“We’re doing what we can to make it institutional,” said Gosling, whose child just graduated from the school. She and some other parents will not be members of the PTSA this school year because their children will have moved on.

As Reston parents worked to solve a problem at their school, their students are not the only ones who suffer from food insecurity in the county.

A total of 50,668 students or approximately 27 percent of students who attended Fairfax County Public Schools during the 2016-2017 school year were eligible to receive free or reduced-price meals through the National School Lunch Program, according to the Virginia Department of Education Office of School Nutrition Programs.

The 2017 federal poverty levels, according to the U.S. Department of Health and Human Services, are:

Federal poverty level amounts are higher in Alaska and Hawaii

To fill the void during the summer, the county participated in the Free Summer Meals for Kids Program, which provides free meals to children aged 5 to 18 years old from June 26 to Aug. 25, excluding July 3 and 4.

The Fairfax County Public Schools Office of Food and Nutrition Services also put on the Food for Every Child to Eat During Summer (FEEDS) BBQ program at various schools across the county during the summer. The USDA-funded program was free for all children 18 years old and younger and $2 for adults. Meals were served from 11:30 a.m. to 1 p.m. from June 26 to Aug. 25, except July 3 and 4, at three locations in Reston and Herndon: Dogwood Elementary School, Hutchison Elementary School and Herndon High School.