Lemonade for a Good Cause in Arlington
Votes

Lemonade for a Good Cause in Arlington

Organized by Bridges to Independence. 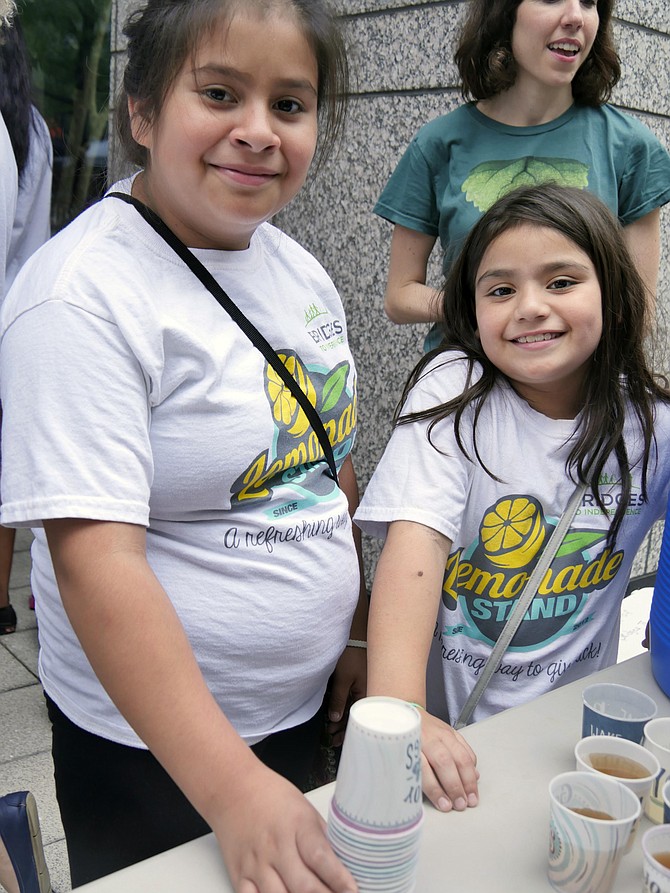 Ten-year-old Brittaney Medina and her eight-year-old sister, Mia, serve cups of lemonade at the Bridges to Independence stand on Aug. 2 at FARMFRESH at Ballston Market. Photo by Shirley Ruhe.

The lemonade stand is on. It's off. It's on again. The Bridges to Independence lemonade stand has been scheduled for the area beside FRESHFARM at Ballston Market from 5:30-7 p.m. on Aug. 2. Early afternoon the rain is pouring down in torrents but Alex Gavin, youth development manager for Bridges to Independence, says,"We're going ahead." She says she was a lifeguard and she is used to looking at weather. "And it only takes an hour to set up, so it is pretty easy."

Sure enough the heavy gray skies graduate into puffy clouds and the blue sky peeks through. A group of children wearing white Lemonade T-shirts marches to their spot in the market. Gavin says, "If at table, go there; if cheerleader, over there." She explains that the cheerleaders walk through the market with their adult buddies carrying home-made signs advertising free lemonade. "Of course we accept donations." Gavin says most people give a dollar or five dollars but sometimes they will get $20.

The funds will be used to start savings accounts for the children and to fund an end-of-summer field trip. "We're going to Hershey Park," Brittaney Medina says. Brittaney and her 8-year old sister, Mia Medina, are working at the table pouring small paper cups of lemonade or half lemonade and half Honest ice tea. A customer comes up and hands over a dollar and then gives the cup to Brittaney. "That's for you."

Rebekah Nance is supervising the table. She says what she has learned from this experience is that there are a lot of unpredictable factors and how to be ready for anything. "There is a lot to do and you have to remind people of a lot of sanitary things." She says this is her first year but her brother and sister have both participated in the past.

Bridges to Independence is a non-profit organization that seeks to lead individuals and families out of homelessness and into stable, independent futures. It serves 120 families and more than 50 individuals each year. The lemonade stands are a child-run enterprise that teaches responsibility and good decisionmaking. They have been the centerpiece of the Bridges to Independence summer youth program since 2010.