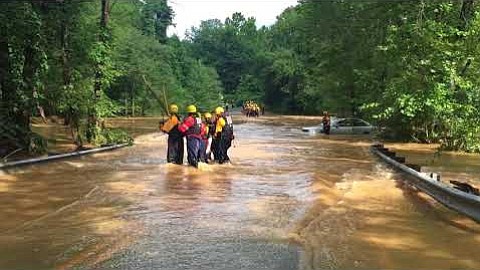 On Wednesday, August 1 at 9:51 a.m., personnel from Stations 42 (Wolf Trap), 29 (Tysons Corner), 21 (Fair Oaks) and 39 (North Point) responded to a report of two trapped motorists on Browns Mill Road over Difficult Run in the Vienna area of Fairfax County. The driver followed two other vehicles into rapidly moving and rising water after a motorist removed a previously installed protective barrier. The water knocked out the engine and swept the car against an obstruction that thankfully kept the vehicle from free-floating into the flooded waterway. Both occupants required extrication, were removed from the hazard area and evaluated by EMS. Motorists are again reminded not to enter flooded roadways. This was the second rescue in the same spot in less than a day.

Please remember: Turn Around and Don’t Drown! Also remember to not remove temporary barriers or cones. They are there for a reason.