Thousands of residents without power as clean-up efforts continue and residents deal with downed trees, closed roads and schools in wake of Hurricane Sandy. 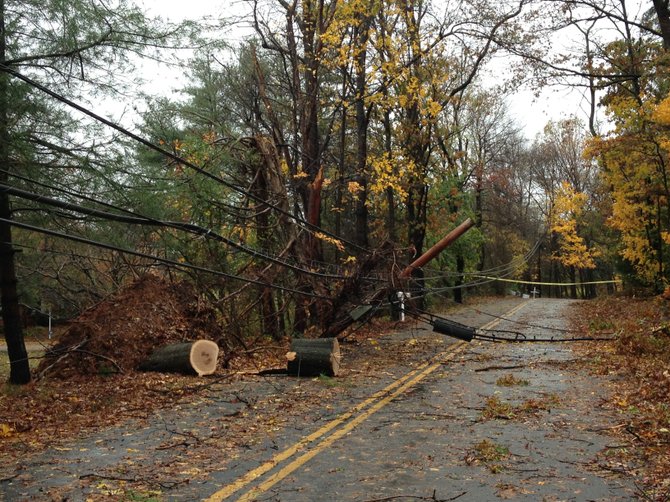 River Bend Road is cut off at the corner of Jeffery Road in Great Falls after a fallen tree knocked down a power line. This picture was taken on Tuesday, Oct. 30, at 12 p.m., the day after Hurricane Sandy swept through Northern Virginia. Photo by Jennifer Benitz

Hurricane Sandy battered the region Monday night, shutting down Fairfax County schools, governments, roads and voting precincts. The mammoth storm made landfall near Atlantic City around 8 p.m., according to the National Hurricane Center, with maximum sustained winds of about 80 miles per-hour.

As of 11 a.m. Tuesday morning, Dominion Power reported that there are 57,000 customers without power County-wide. The Virginia Department of Transportation gave an update at 7 a.m. Tuesday morning, reporting that about 143 secondary roads in Fairfax, Loudoun and Prince William counties remained closed due to either high water, downed trees and/or power lines. The majority of these roads are in Fairfax County. VDOT also reported there were 107 signal outages in Northern Virginia, and to treat these outages as four-ways stops.

“Our crews are working throughout the day and night to assess storm damage, remove debris and work closely with emergency responders and utility companies to reopen roads closed due to downed trees and power lines,” said VDOT spokesperson Joan Morris. 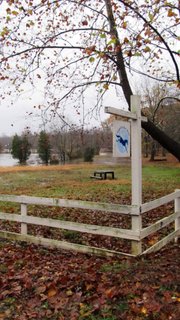 Nearly a foot of floodwaters remained on the field of Anjelica Run Horse Farm in Vienna Tuesday, Oct. 30 around 9 a.m. Although Hunter Mill Road was closed, cars were skirting the barriers to go across the bridge that was reconstructed near the farm after it sustained severe flooding last September during Tropical Storm Lee.

VDOT estimates that it will take several days to reopen all roads.

Many residents who were driving this morning said the roads are still slick and there are leaves and debris everywhere.

Last night, Vienna resident Wolf Gottshalk reported he drove down Hunter Mill Road past Hunter Station Road to get to his neighborhood.

“The road was flooded. The bridge is not flooded, but the road on the Hunter Station Road side of the bridge is washed out. I made it through (SUV), but it is very difficult to see and you come up on the water quickly and it is deep,” Gottshalk said.

At 5 a.m. Tuesday morning, Hunter Mill Road was still closed, but the floodwaters had receded and cars were driving around the barriers.

She cautioned motorists to turn back if they are driving and encounter a patch of road that is underwater.

“It may look like you can drive through the water,” she said, “but it’s often deceptive how deep and fast-moving the water is. Don’t chance it, just turn around.”

Cars enter floodwaters on Hunter Mill Road in Vienna Tuesday, Oct. 30 at 9 a.m. The road was closed until 10 a.m. Tuesday.

“Many trees fell across roads last night and by this morning they were largely cleared thanks to their efforts and the planning and preparation that took place before the storm.

There are still areas without power. Please check with your neighbors to make sure they are alright and do not need help,” said Supervisor Pat Herrity (R-Springfield.)

Countywide it is reported that 55 trees fell into homes.

“I saw many trees leaning into other trees, structures and wires this morning. Please keep yourself and kids clear of these trees until they have been assessed and dealt with,” he said.

According to VDOT, all interstates in northern Virginia are clear. VDOT officials reminded drivers that HOV restrictions have been lifted today on interstates 66, 95, 395, and the Dulles Toll Road.