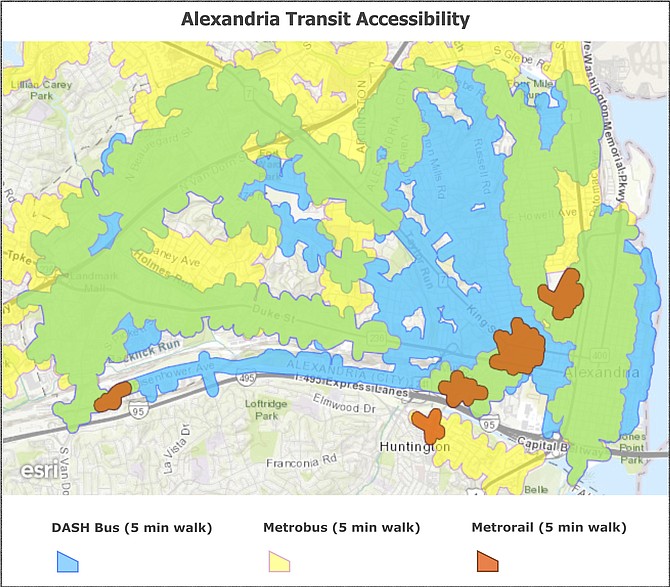 “How do we provide more frequent service in the places that really need it without cannibalizing the system itself?” — Yon Lambert, city’s transportation and environmental services director

Alexandria has seen much success over the last decade in implementing its Transportation Master Plan (TMP), aimed at integrating and improving access to transportation options and reducing reliance on automobiles. But population growth, an enduring preference for the automobile, decreasing transit ridership, and changing technologies pose new challenges in adapting the plan for the future.

The TMP, adopted in 2008 with a 10-year horizon, envisioned “a transportation system that encourages the use of alternative modes of transportation, reducing dependence on the private automobile.” The plan calls streets the city’s “largest public resource.” It “rejects the notion that traffic congestion be considered a necessary evil” and “strives to return the city streets to the citizens.”

Driving alone remains Alexandrians’ most common mode of commuting, accounting for half of all commutes, according to a 2017 survey. Nevertheless, vehicle miles traveled (VMT) decreased by nearly 13 percent between 2010 and 2016, according to the Transportation Planning Board (TPB), a metropolitan planning organization. That’s more than any other jurisdiction in the region. VMT in Fairfax and Arlington fell by less than 2 percent.

Over the years, Alexandria has undertaken a variety of TMP-related infrastructure and policy improvements.

Despite its recent controversy, the new Potomac Yard Metro station is expected to remove some 5,000 vehicles for the road per day, according to the city’s web site.

In 2016, the City Council adopted the Pedestrian and Bicycle Master Plan, which amended the TMP. Of the plan’s 69 objectives and strategies, the city says it’s initiated all but two and completed or made “substantial progress” on about a third.

The city is improving its Intelligent Transportation System (ITS). This system, also dubbed “Smart Mobility,” involves installing infrastructure and sensors to improve communication and data collection. It also intends to pave the way for advanced autonomous vehicle and traffic management technologies. In June, the Northern Virginia Transportation Authority (NVTA), a funding agency, approved $1.3 million for Alexandria ITS projects. And within the next several years, the city intends to update the TMP with a dedicated ITS chapter, said Hillary Orr, the city’s deputy director of transportation.

To address the problem that “transit is not viewed as a comparable alternative to the private automobile,” the TMP proposed “dedicated, congestion-free” bus lanes along three corridors: Route 1, north-to-south; Duke Street, east-to-west; and Van Dorn and Beauregard streets, north-to-south through the West End. The city has completed the first and received initial funding from NVTA for the second. NVTA denied nearly all of Alexandria’s request for the third. The city is now seeking alternative funding through Smart Scale, a state program.

In the city’s 2017 survey, car commuters most frequently responded that driving is fastest and most convenient (57 percent); public transportation takes too long (36 percent); and they have other stops to make (22 percent).

“There’s not a lot you’re going to do to get them to walk with their baby for 10 minutes to take the bus to daycare to drop it off, to get on another bus to get to Metro. It comes down to the trade-offs that people are willing to take, and convenience and time are important,” said Orr.

From almost anywhere in the city, residents can already walk to a bus station within five minutes. But many stations lack an “urban” level of frequency, with passengers waiting 20 minutes between buses, said Yon Lambert, the city’s transportation and environmental services (T&ES) director.

In addition, he says Metro’s problems have a ripple effect, inasmuch as commutes entail bus-to-rail transfers. From FY 2015 to FY 2017, average monthly DASH ridership decreased 8 percent, paralleling a 22 percent decrease in monthly Metro ridership at Alexandria’s four stations. That’s according to data in the May board minutes, the latest available, of the Alexandria Transit Company (ATC), which operates DASH. ATC projected to close out FY 2018 with passenger revenue $365,000 (10 percent) below budget.

In part due to these challenges, the city and ATC will begin public outreach in September toward developing the Alexandria Transit Vision (ATV) plan. ATV “represents an opportunity to fundamentally re-imagine the city’s bus network from scratch,” according to the city’s web site.

While city staff have no preconceived agenda, “11 routes … all operating at less than urban frequency is likely not how that system should best operate,” said Lambert. “How do we provide more frequent service in the places that really need it without cannibalizing the system itself?” One possibility is to employ smaller but more frequent neighborhood “circulators shuttles,” which TMP already describes.

In any case, though the city strives to make alternatives available, driving is hardly a thing of the past. Lambert said: “We’re definitely planning for cars, and we have to. … We are definitely incentivizing more transit. I don’t want to go so far as to say we are disincentivizing people from driving.”

Jim Kapsis, chair of the city’s Environmental Policy Commission, summed up: “Looking back on the last 10 years, we have made progress. … But we have real challenges with Metro ridership down, a growing population, and new technologies from Lyft and Uber to dockless bike-share that are putting pressure on traditional public transportation. All of these changes will require us to think differently and creatively about our mobility strategy for the next 10 years.”