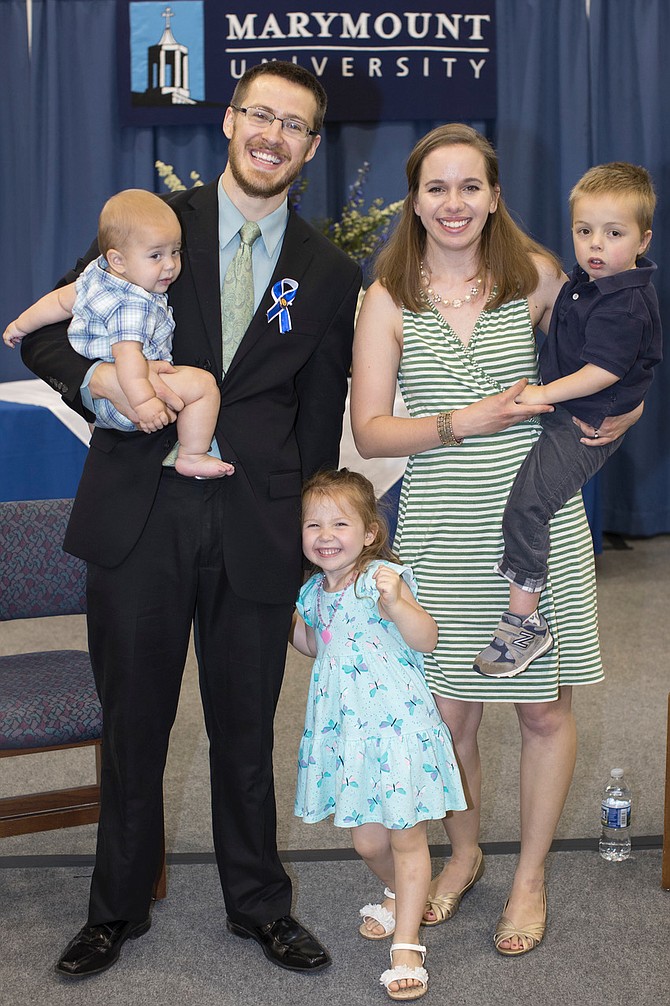 Being a parent guides Adam Mann’s approach to nursing and inspired him to change careers after his son struggled to stay alive during the first months of his life. The Arlington resident spoke at Marymount University’s Malek School of Health Profession’s nursing pinning ceremony in May, then graduated that afternoon with his second bachelor’s degree, just 16 months after his wife, Lauren, completed the same accelerated nursing program.

“During severe episodes, Isaac’s heart could go up to six seconds without a beat, his limbs would go limp, and he would turn a dusky gray,” Adam Mann said.

It was the beginning of a five-month medical odyssey that included a three-month hospital stay, a discharge with a home heart monitor, readmission and heart surgery.

“My first experience of fatherhood was an unusual one, to say the least, but I learned some very important lessons,” Adam Mann said. “Every father wants to protect his child, but I had to accept that I would not be able to.”

The couple needed other people — many of them nurses — to help keep their son Isaac alive. Adam Mann also had a hard time grasping what he was being told about his son’s condition, and relied on family members. Both of Adam Mann’s parents are nurses, and his father-in-law is a doctor of veterinary medicine.

“Although it was a time without a lot of answers, at least they knew the right questions to ask,” Adam Mann said.

Now 5 years old, Isaac has two younger siblings, Lydia, 3, and Caleb, eight months. Isaac is healthy, though nonverbal and developmentally at the level of an 18-month-old.

His wife, who had earned her first bachelor’s degree in photography at Virginia Commonwealth University and worked as a photographer, began taking online courses at NOVA (Northern Virginia Community College) to better understand her son’s medical condition. She eventually transferred to MU’s accelerated nursing program. The program, for students with a previous bachelor’s degree and required prerequisites, is completed in just under 16 months. She’s now a nurse at Children’s National Medical Center’s heart and kidney unit, where Isaac was a patient.

“I like feeling that I make a difference,” Lauren Mann said. “I have the most contact with the patients of anyone on the medical team and can advocate for them.”

She works with babies with congenital heart defects. Not only are their infants getting discharged from heart units, it’s often the first time the mothers are taking care of a baby.

“I get to teach them how to be confident and take the baby home,” she said. “It is so rewarding.”

Adam Mann, an English and finance major at Notre Dame who had worked in accounting for a non-profit, began the accelerated nursing program a month after his wife graduated in December 2016. After an internship on the pediatric unit of the National Institutes of Health’s Clinical Center this past semester, he will begin work in August at the Cardiac ICU at Children’s, another unit where Isaac had been a patient.

Adam and Lauren Mann are 2008 graduates of Bishop O’Connell High School in Arlington. They said they never could have gone through the challenging MU program — while raising three young children — without the help and support of their families, both of whom live nearby.