In memory of Harriet H. Fatzinger. 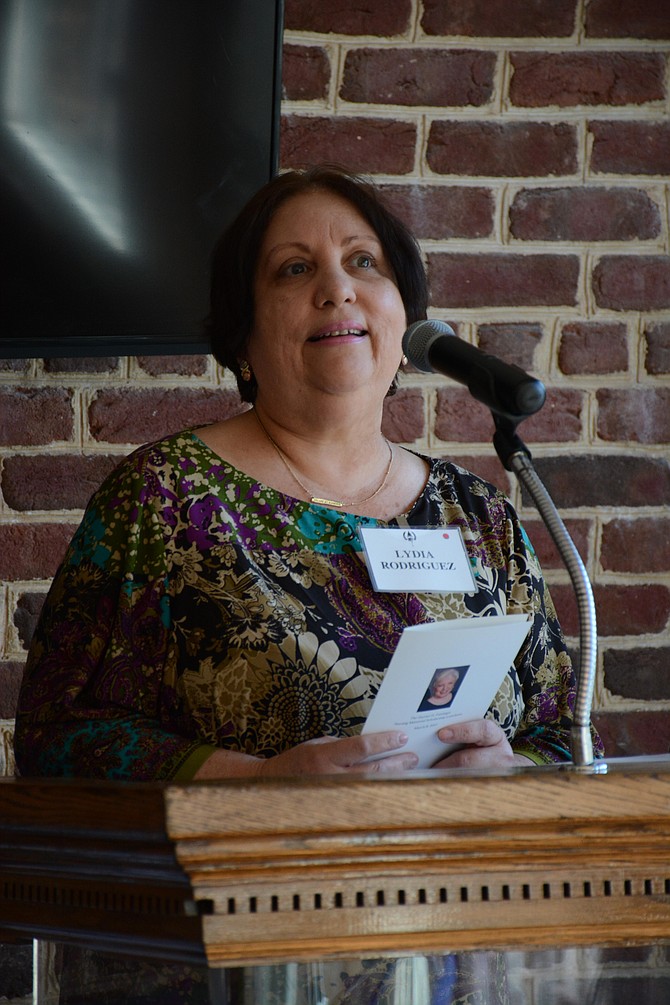 The Rev. Lydia Rodriguez Colón of Wesley United Methodist Church in Alexandria delivered an invocation at the luncheon, praising “so many good things still happening” in a world plagued by so much negativity. Photo by Tim Peterson.

Dr. Glenn Fatzinger (center) told scholarship supporters at the Mount Vernon Inn his wife Harriet was a candy striper and then enrolled in a 24-month nursing program at the Northern Virginia Community College Annandale campus.

You don’t just become a nurse, it’s something you have in your heart. That was the message from Andrew B Cornell, Sr., interim provost of the NVCC medical education campus, speaking at the Harriet H. Fatzinger Nursing Memorial Scholarship Luncheon held March 8 at the Mount Vernon Inn restaurant on George Washington’s estate.

While pursuing education was a primary reason for the lunch gathering, “there’s a difference between knowing something and being something.”

This year’s scholarship awardees, both men, demonstrated their connection to the service profession. Cameroon native Maxime Djabang Lakouji is a combat medic with the 299th Engineer Company in the U.S. Army Reserve and plans to go into medicine by way of nursing. Patrick Smith has spent nearly the last 10 years working with Fire & Rescue and EMS but wants to become more involved with patient care as a nurse practitioner.

“This is a chance of moving forward,” Lakouji said. “Life isn’t always as you planned. You need help along the way, help to reach your objectives. This [scholarship] is life-changing.”

Smith said that 10 years ago, he would’ve had no idea this is the direction his life would be going. But after he took an exam to become an emergency medical technician, he fell in love with the work, particularly forming relationships with patients.

The scholarships are awarded in memory of Harriet Fatzinger, whose late husband Dr. Glenn Fatzinger said came to nursing herself late, as a mid-career change.

“The next time you visit a hospital,” Fatzinger told the room of scholarship foundation supporters, “one of these could be the nurse you see. Helping others, it’s what it’s all about.”

The Rev. Lydia Rodriguez Colón of Wesley United Methodist Church in Alexandria delivered an invocation at the luncheon, praising “so many good things still happening” in a world plagued by so much negativity.

“This is a celebration of a life,” Rodriguez Colón said, and of students becoming peacemakers and healers.

For more information or to make a tax-deductible donation to the Northern Virginia Community College Educational Foundation, visit www.nvcc.edu/foundation.