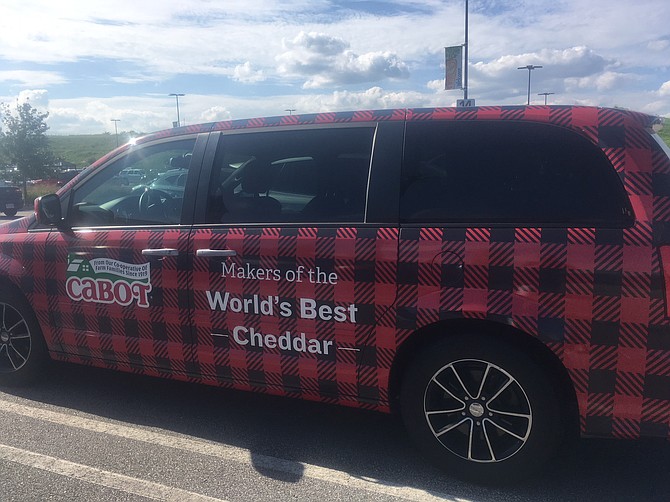 Springfield — When Cassie Sutton graduated from the University of Vermont last May, she didn’t picture herself driving around the northeast United States giving out 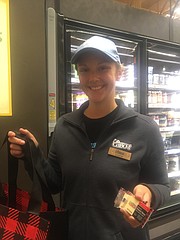 cheese. But in August, she was in Northern Virginia, stopping at a fire station in Herndon, and Cornerstones, in Reston to spread the word as part of “Random Acts of Cheddar,” for Cabot Creamery.

“I’ve had a lot of positive interactions,” Sutton said, “lots of cheese jokes.”

From her home in upstate New York, Sutton has been through Maine, New Hampshire, New York, Massachusetts, Pennsylvania, Maryland and the northern part of Virginia, talking about cheese, supporting non-profits and the importance of volunteering. On Saturday, Aug. 25, she was at her final stop in Wegman’s in the Kingstowne area.

“It’s a really rewarding feeling,” Sutton said from her table in the store.

The Random Acts of Cheddar followed a plan as described on their website: “Starting in June, Cabot’s Traveling Ambassadors visited volunteer organizations, non-profits, and service groups as well police and fire stations across the country, to thank them for all they do to make the world – and their cities and towns – better. We can’t think of a more heartfelt way to say thank you than with Cabot’s award-winning cheddar, made with love from our farm family owners to you.”

Mount Vernon resident Linse Wood stopped at the table and ate a chunk of their “Vermont Seriously Sharp White Cheddar.”

She’s a cheese connoisseur and liked that they were promoting community.

“Got a little stink to it, and that’s good,” Wood said of the cheese.

Cabot Creamery is a farmer co-op of about 1,000 farmers producing everything that’s dairy. Cabot Creamery Cooperative has been in continuous operation in Vermont since 1919, and makes a full line of cheeses, Greek yogurt, sour cream, cottage cheese and butter.

Sutton studied food science in school, and knows that cheese gets a bad rap from the vegans and cholesterol watchers, but it does have it’s highpoints.

“It’s a healthy snack, a source of calcium,” Sutton said, “we have no lactose in our cheddars,” she said. Fellow Cabot marketing ambassador, Jo Sable Courtney, was with Sutton spreading the word in Kingstowne, and both are in the Department of Gratitude at Cabot.

“We’re serious about this ‘thank you’ thing,” Courtney said.