Not All Pleased With Intersection Improvement Plan in McLean
Votes

Not All Pleased With Intersection Improvement Plan in McLean 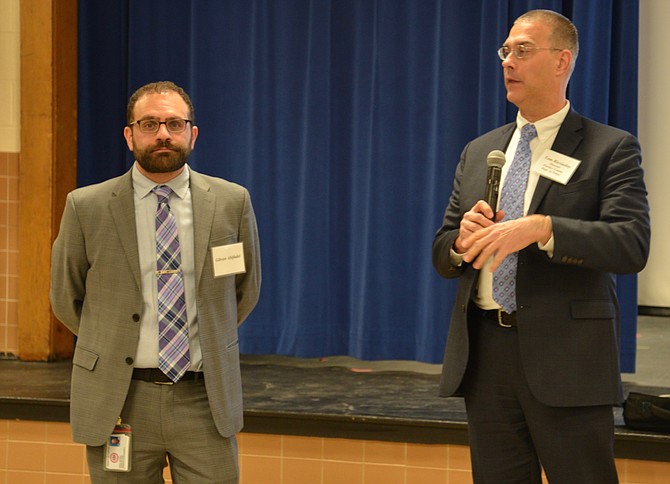 From left: Project manager Gibran Abifadel and Director of Fairfax County Dept. of Transportation Tom Biesiadny present the recommendation A-1 to improve the Balls Hill/Old Dominion intersection to a meeting of residents. The meeting was originally scheduled to take place earlier in the month, but was postponed due to the snow event. Photo by Andrea Worker. 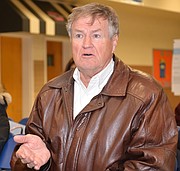 Alan Lund of McLean has questions and concerns about the county’s intersection improvement proposal, one being why round abouts are not being considered versus additional traffic lights. 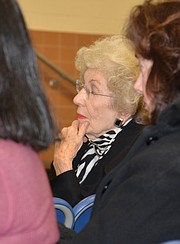 Jean Jonnard, a resident of McLean for some 50 years, doesn’t think the county’s plans for the intersection at Balls Hill Rd. and Old Dominion Dr. answer the greater question of traffic congestion and safety in the area.

While there were a few who expressed their overall approval for Fairfax County Department of Transportation’s (FCDOT) recommendation for improvements to the Balls Hill Road and Old Dominion Drive intersection in McLean, the majority of those who attended the meeting at Cooper Middle School on the evening of Nov. 28 were less than satisfied with the outcome of more than two years of study and analysis.

FCDOT project manager Gibran Abifadel and Director Tom Biesiadny presented plan A-1 as their recommended solution for the exchange. This iteration would reconfigure what they have described as “severely skewed roadway geometry” that with a 3.8-minute average wait currently rates an “F” on their length-of-service scale. That metric measures the seconds of delay that each vehicle experiences at an intersection during peak hours on a scale of A – F.

THE CHOICE OF A-1 as the recommended plan was further enhanced, according to Abifadel and Biesiadny, by the county’s recent purchase of a 1.68-acre parcel from the developers of the Summerstone property on Old Dominion, across from Mehr Farms.

The $3.1 million purchase “gives us room to add 2,750 feet of pedestrian pathways and 1.5 miles of bike paths,” said Abifadel. The additional land also allows the county to include stormwater management systems without further parcel purchases or costly negotiation with residents or developers.

“This option also presents the best Length of Service improvement,” Abifadel added, noting that the studies had rated the others as “B” at best, and “D/E” in the case of the plan that included Virginia Department of Transportation requests. “The other options also look to be more costly and more disruptive to residents, nor do they add the enhancements of improved pedestrian and cyclist access.”

Dranesville Supervisor John Foust, whose jurisdiction covers the affected area, expressed his approval for the project, declaring it “the best option” and citing that experts in the field of transportation believe these changes would “dramatically improve the intersection and flow of traffic.”

Not all of his constituents are equally convinced.

Adrian Lund of McLean was just one of many who questioned why the construction of roundabouts “that also assist with traffic calming” are not being given serious consideration, instead of adding “more traffic light intersections.” The fact that only about 1,000 feet will be separating two sets of lights have some concerned about backups building in that space when drivers practice the “green-go, yellow-go faster and block the box” method of road navigation.

The FCDOT representatives’ defense of traffic lights versus roundabouts met with considerable push-back from residents with comments like “why do they work everywhere else in the country, and in fact, all around the world? Even when there are multiple entrances and exits involved?”

Another point of disagreement between the presenters and the resident opposition was the perception of a lack of comprehensive, big-picture planning by the county when addressing transportation and traffic issues.

A number of the plan opponents questioned the effects of the proposed improvements on other intersections, neighborhood access points and streets being used as cut-throughs for traffic or toll avoidance.

Jean Jonnard, a 50-year resident of McLean was one of those who didn’t see how easing traffic flow in one spot would make it any easier for her to exit her own neighborhood, with its limited sight access, as cars flow by. Adding the bike paths worries Jonnard, as well.

“Right now, if there is a problem, you basically have to pull off into the gully to get out of the way. If you take even that away, where do cars go if there’s a problem?” Jonnard thinks that further paving over the sides of Old Dominion and Balls Hill will create safety risks and cause more congestion if a vehicle is disabled or if there is a minor accident.

Other residents continued to name streets, intersections and traffic choke-points that they feel will actually deteriorate because of increased flow of traffic at the improved intersection, or that will simply not benefit at all from the project.

These locals were not receptive to Biesiadny’s repeated response that this study and plan do not address those other points, only the Balls Hill and Old Dominion crossing.

“You’re actually making our argument for us in this case,” said one gentleman who described himself as a long-time McLean resident. “No one is considering the full, wider effects of what you’re doing. That’s how we got into this mess to begin with.”

ONE OF THE BIGGEST ISSUES of contention for the attending residents came down to timing.

When asked what are the next steps in this proposal process, Abifadel answered that the recommendation was complete and would be presented for approval by the Fairfax County Board of Supervisors at their next meeting on Tuesday, Dec. 4. His announcement was met with astonishment by a few of the attendees.

Lund, among others, was dismayed that the county had months to review the study plans, while residents were given less than a week from this presentation to the vote before the Board, and that the vote would be a simple “up or down” without any further public hearings or testimony allowed by residents.

Biesiadny countered that the public hearing held in June had been well-attended and that 32 comments had been submitted and reviewed before proposal A-1 was chosen as the best option.

“But there have been changes since that meeting and not everyone knew about it” was the common response from those in opposition.

Project manager Abifadel did his best to reassure those residents who still had questions and concerns, telling them that more input would be solicited during the design phase of the project, should it be given the green light by the Board of Supervisors.

Even if approved, he reminded them, any actual work is unlikely to begin before 2023.

The A-1 plan and more information about the project is available on the county’s website at www.fairfaxcounty.gov/transportation/projects/Balls-Hill-Road.