Sharon Bulova Reflects on Getting Started

Chairman looks forward to ‘more time with family and grandchildren, time for travel, to entertain, to smell the roses.’ In her own words: 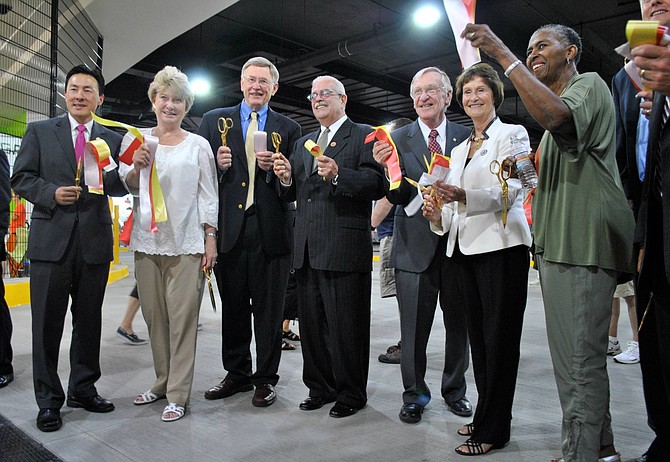 “My term does not end until the end of next year. Between now and then there is still much to do and to contribute.” —Sharon Bulova

Memory is funny. If you asked me what I did last Tuesday I would be hard pressed to fill in the details. Some things, however, remain frozen in time, down to seemingly insignificant details.

Lunch at Hunan West on Jan. 11, 1987 is one of those memories. I was working as an Aide to Annandale District Supervisor Audrey Moore. She had pretty much made up her mind to run for Chairman of the Board of Supervisors against incumbent Jack Herrity. My co-workers, Florence, Carolyn and Janet, and I had escaped the office for lunch in the Kings Park Shopping Center.

We began discussing Audrey's plans, then the subject shifted to who would run for the open Annandale District seat. "Sharon Bulova," announced Florence Naeve. I looked up from my Sweet and Sour Pork laughing, thinking that she was joking. To my horror, my friends' expressions were electrified. They excitedly began listing all the reasons why this was a good idea. I countered with a list of my shortcomings, why I couldn't possibly run for office, starting with a phobia about speaking in public. Carolyn smiled broadly and exclaimed, "And see! You're so modest and organized!"

Sometimes routine events like lunch with friends can prove pivotal. Despite all my doubts and misgivings, I did, indeed run for office, and went on to serve as Annandale - later renamed Braddock - District Supervisor for the next twenty years. When then-Chairman Gerry Connolly was elected to Congress in 2008, I ran for his open seat in a special election on February 3, 2009. This coming February will mark ten years since I have served as Chairman of the Fairfax County Board of Supervisors.

Local government is an awesome place to be. It's the level of government closest to the people you represent. It's the place where you can truly make a tangible difference, touch lives, and engage with the community in a personal, positive way. Deciding when to stop is just as hard as making the decision to start down the road of elective office. For me, however, that time has come.

When questioned by Tony Olivo of the Washington Post about my plans for running, I told him I was going to use the Thanksgiving holiday to think about it, and to talk to my family and friends. On Thanksgiving Day my son David arrived for dinner equipped with a large flip chart and colored stickies for voting. He titled the Chart "Family Decision Making Matrix" and separated it into "Pros" and "Cons." It was a fun, light-hearted after dinner activity. Many of the items listed on the "Pro" side of the chart were some of the reasons that had already persuaded me to not seek another four-year term. More time with family and grandchildren, time for travel, to entertain, to smell the roses.

It has been an honor to serve the Fairfax County community on the Board of Supervisors. During these past thirty years, I have been privileged to work alongside dedicated elected officials at every level of government, with talented, caring county staff and a county full of enthusiastic community volunteers. While I will not be running for re-election in 2019 I sure do have a lot to look back on with satisfaction.

My term does not end until the end of next year. Between now and then there is still much to do and to contribute. I look forward to working with you during these months ahead and thank you for your engagement and participation in your community.