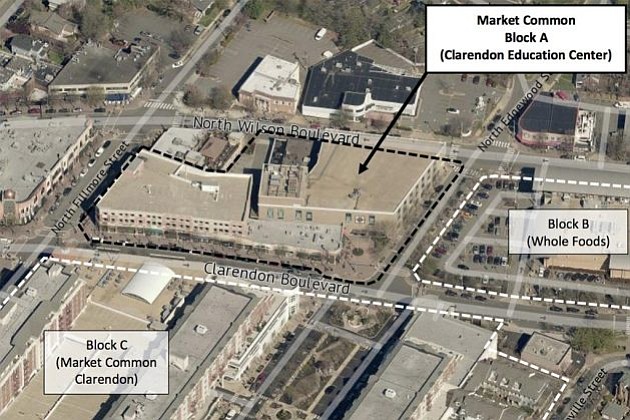 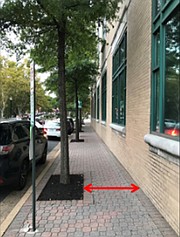 The narrow sidewalks of Wilson Boulevard.

IOTA is gone, but the bands play on in Clarendon. In the block formerly occupied by the IOTA Club and Cafe, closed last September, a new plan for a sweeping redevelopment of the block was approved at the Arlington County Board’s Jan. 30 meeting.

The Market Common Phase II plan transforms a block of Clarendon into an open ground-floor retail section with office space above, a design becoming commonplace across Arlington’s Metro corridor. The currently vacant building will be renovated and expanded. Of note for many in the community was the expanded sidewalks at the site. Currently, at its narrowest, the sidewalk narrows to just 2.8 feet, but will be widened now to 6.5 feet.

“We’re fairly excited to now have a proper sidewalk,” said Scott Pedowitz, president of the Clarendon Courthouse Civic Association. “I fancy myself a fairly agile pedestrian and I have trouble with that one block, I can only imagine what it’s like for people who are less mobile. This will be a notable improvement.”

The shadow of IOTA and other retail in the area lingered over the site. County Board Member Erik Gutshall said this concern wasn’t necessarily leveled at this particular redevelopment, but in general Gutshall said he was worried about applicants driving out beloved local tenants before coming in for a site plan amendment.

There was also concern, noted by Pedowitz, that the site was bringing new retail and new office space into an area already struggling with vacancies and restaurant turnover. County Board member John Vihstadt noted that the whole region faces pressure on its retail environment, and County Manager Mark Schwartz admitted that turnover is a problem for Clarendon.

“There is a perception, and I’m one of the people who has it, when I drive through Clarendon that there’s been a lot of changeover and restaurants closing,” said Schwartz.

The applicant, however, noted that retail is continually evolving and their goals with the Market Common project is to turn the site into a destination.

“What you’re doing, what we all are trying to do,” said County Board member Libby Garvey, “is make [Clarendon] a place where people want to be.”

“We’re working to bring a little funkiness back into Clarendon,” said County Board member Christian Dorsey. “That’s been lost over the years.”