Rev. LaVerne Gill’s book profiles individuals who went through the struggles of early Reston and still love it and believe in it. 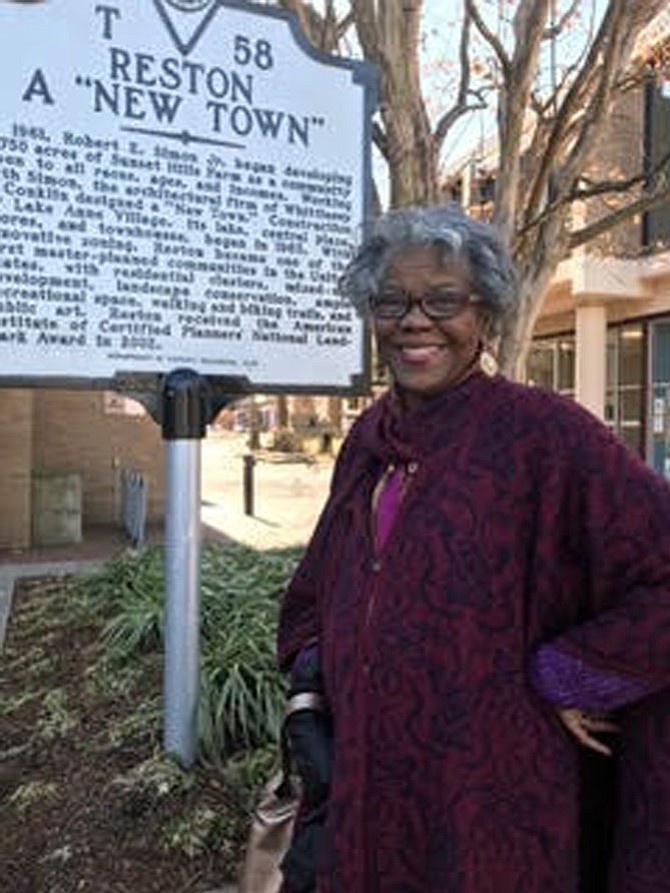 Rev. LaVerne Gill, author of five books, stands beside the waymarker located at Lake Anne in Reston noting the founding of the planned community. In her most recent book, "Reston's African American Legacy, Volume No. One" she celebrates 25 African American pioneers who made a difference in a "New Town." Photo by Mercia Hobson. 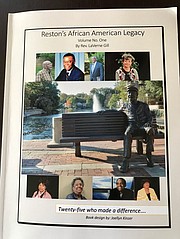 "Reston's African American Legacy, Vol. No. One " by Rev. LaVerne Gill documents the contributions of African Americans who as the author stated: "...have been overlooked in many accounts of Reston's history, even though they were critical to enhancing its quality of life."

“I wanted to get the story of people who had gone through the struggles of this wonderful community and still love it and believe in it.” — Rev. LaVerne McCain Gill

Rev. LaVerne McCain Gill has lived in Reston for more than three decades. Although not one of the original pioneers who settled in the first intentionally integrated community in Northern Virginia after it was founded in 1964, Gill is a pioneer in her own right. During Reston's 50th Anniversary in 2014, Gill realized there was no written history in one place recording the stories of the first African American pioneers who settled in Reston, and contributed to its success and set out to produce one.

Gill's newly released book, "Reston's African American Legacy Volume One, Twenty-five who made a difference," profiles African Americans who contributed to the cultural, economic, and spiritual life of Reston, a New Town. Through information Gill gathered during personal interviews, she recorded and wrote the stories of Reston's first African Americans. “They have been overlooked in many accounts of Reston’s history,” Gill writes in the book’s introduction, “...even though they were critical to enhancing its quality-of-life.”

GILL CELEBRATES AND HONORS Reston's African American heroes and historical leaders from all lifestyles, teachers, scientists, artists, professional athletes, lawyers and, as she records, "...just plain, hard-working people lured by the promise of Civil Rights gains in education and housing.”

When asked why she wrote the book, Gill said, “I wanted to get the story of people who had gone through the struggles of this wonderful community and still love it and believe in it. I recognized there were a number of African Americans who enhanced the atmosphere [of Reston.] They founded churches, local chapters of national organizations and they engaged in creating a place where diversity was accepted."

Gill describes early Reston as a progressive island, planned for diversity yet set in the middle of Virginia's troubled history of segregation. “Virginia was one of the last holdouts on school desegregation,” she writes in Profile # 15 William and Mary Jackson, Charter Members, United Christian Parish. Gill relates the couple’s story of how in the early years of Reston there were no schools there for the children to attend. Instead, they had to travel to schools in another community where the residual from the "Massive Resistance" era, when the U.S. Supreme Court declared Virginia’s tactics to segregation unconstitutional in 1968, lingered.

Gill recounts the Jacksons’ story of how their sons "...had difficult moments because their educational exposure was more advanced and challenging than Herndon's curriculum offerings." Gill describes how Mary Jackson found common ground with other Reston arrivals who were not dealing with race, but also confronted with limited curriculum options. “Mary Jackson along with two of her white neighbors organized and began initiating meetings with teachers and principals…It was a difficult journey for Mary and Bill Jackson, but they traversed it for the sake of their and other Reston children in the school system.”

Dr. William B. Robertson writes in his review of Gill's book, "The book by Rev. LaVerne Gill, ‘Reston's African American Legacy,’ is an important contribution, not only to Reston but to the Commonwealth of Virginia and the nation as a whole because it emphasizes that the diversity of America is our greatest strength."

Reviewing Gill's book, Brenda Iron-LeCesne, a retired attorney, adds two other reasons why the book is important. "... I have been a resident of Reston for 40 years, and my husband and I have had the opportunity to see the community grow and change. It's difficult to try to explain to newcomers how African American families are interwoven into the fabric of Reston. Many of the original African American Restonians have passed, and there is no real history in one place telling their story."

Eula M. Lovett in her book review writes, “‘Reston's African American Legacy’ is an exceptional look at the African Americans who made Reston their home. Each one depicted in the book is a high achiever in areas such as education, science, mathematics, etc. They brought their talents to Reston to establish traditions and organizations to serve the community.”

GILL SAID HER ONLY REGRET is that she could not publish the book sooner, noting that some individuals she profiled have since died. Asked to whom she will target the book, Gill said, "I'm targeting Reston's audience. No matter what race, from high school age on." If the stories are not told, then future generations will not know the significance and take the lifestyle and opportunities for granted that so many other people worked so hard to secure. "I need to also market it to the Reston schools,” Gill said. "The history will go untold; we are a generation on the way out."

The book is available at www.amazon.com/LaVerne-McCain-Gill.