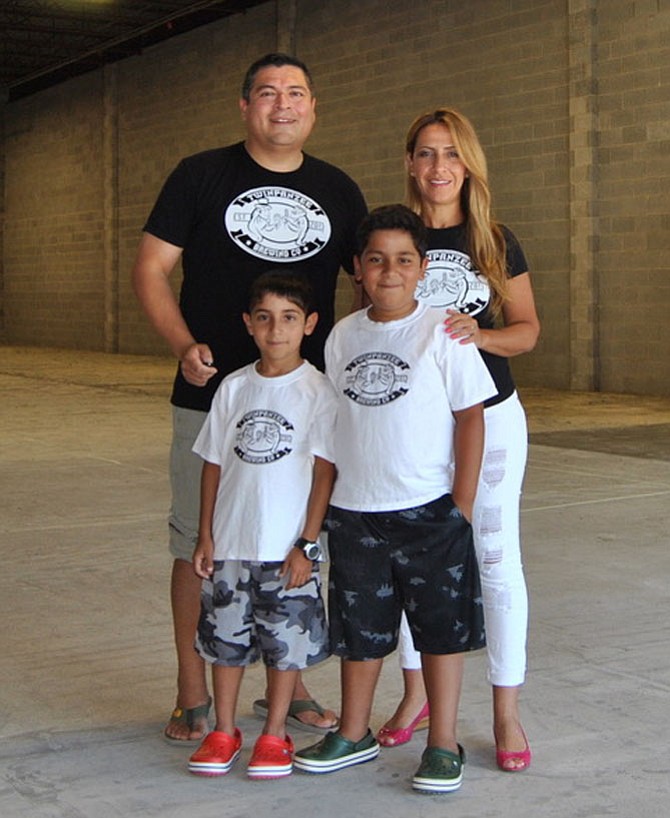 Antonio Maradiaga and his wife Maha Majdoub, with their 10-year-old twins. Photo contributed

“Primates 4 Primates” fundraiser at Twinpanzee Brewing Company will be held on Feb.11 from 3-6 p.m.

For local resident and brewer Antonio Maradiaga and his wife Maha Majdoub, hosting a fundraiser on Feb. 11 benefiting orphaned chimpanzees in Liberia at their family-owned nano-brewery was a no-brainer.

“My immediate response to it was, that’s great, I would love to do it,” Maradiaga said.

Named after their twins, now 10 years old, Twinpanzee Brewing Company was a perfect fit for a good cause raising funds for Liberia Chimpanzee Rescue and Protection whose mission is to establish the first and only chimpanzee sanctuary in Liberia. When Loudoun resident and photographer Kristi Odom approached the brewery about the fundraiser idea, there was no hesitation.

“We’ve always called our twins chimps or monkeys. We’ve always loved nature,” said Maradiaga who was born and raised in Fairfax. As a Boy Scout, Maradiaga said a love and appreciation for nature and conservation was instilled in him at a young age.

Maradiaga’s strong roots in Fairfax County, where his parents still live, have kept him grounded. Although they tried for three years to bring their brewery to Fairfax County, it ultimately ended up in Loudoun County.

“I’m one of those people that stick around Fairfax,” he said, adding that they’re active with local community groups such as the Cub Scouts of America and at their boys’ Fairfax County school.

After graduating from Mclean High School, he pursued a double major in psychology and English from George Mason University and a Masters in child psychology from the same university. He eventually landed a job as a software developer in 2000 after gaining experience in software packages helping at the faculty computer lab.

But it was his hobby for brewing, which began in 2006 that became the catalyst for the brewery, which opened this past August. This month is their six-month anniversary.

“The brewery is an extension of my hobby,” he said, a hobby he does at night and on the weekends.

“It started with one of those Mr. Beer kits,” he said, teaching him important basics like sanitizing and cleaning. After receiving an all-grain brewing kit from his wife, he was hooked.

“I just really, really enjoyed it,” he said.

The fundraiser, “Primates 4 Primates” presents an opportunity to not only raise awareness of orphaned chimpanzees, victims of Liberia’s illegal bush meat and live pet trades, but to offer a new beer based on food chimpanzees eat like figs and mangoes, honey, and milk lactose. The family-owned and -built brewery creates their beer flavoring with 100 percent natural ingredients.

Their hope is to raise awareness for the non-profit organization and to meet “a whole new set of people who maybe never thought of coming to our brewery.”

“Primates 4 Primates” fundraiser at Twinpanzee Brewing Company will combine a love for primates, beer, and art on Sunday, Feb.11 from 3-6 p.m. at 101-D Executive Drive in Sterling. Food and live music will be available. Visit www.facebook.com/Twinpanzee/.