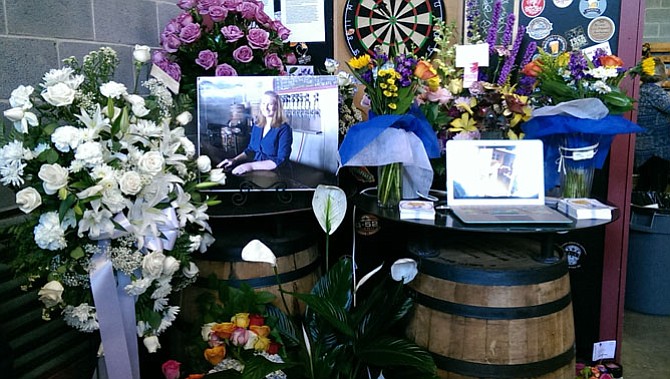 A memorial set up in the taproom of Forge Brew Works celebrated the life of the brewery’s owner Kerri Rose, who died from stomach cancer. Photo by Tim Peterson. 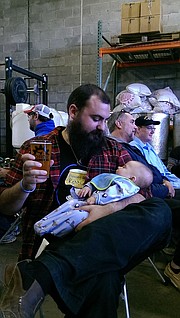 Matt Rose and his son Lance of Mount Vernon enjoy the comfort and company of friends and family at Forge Brew Works, the Lorton brewery Rose built with his late wife Kerri. 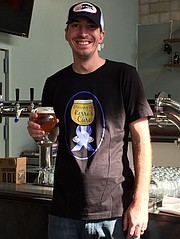 Golden afternoon sun gleamed in through windows and lit up cold, grey cinder blocks, faces already beginning to blush after a beer or two, and lush flowers atop large barrels in memory of Kerri Rose. Rose and her husband Matt, Mount Vernon residents, own Forge Brew Works in Lorton. In August of 2015, she was diagnosed with Stage IV stomach cancer. Kerri was also pregnant.

On Jan. 29, Forge and 19 other local craft breweries tapped kegs of Kerri’s Cure, a Belgian Pale Ale brewed before she died as fundraiser to help cover her medical expenses, lost wages and travel to Pennsylvania for alternative treatment. She died before the beer was released; all proceeds from its sale will still go to her Go Fund Me page for medical expenses and an educational trust for Kerri and Matt’s infant son Lance.

Jones said Fair Winds and Forge both sold out of their three kegs of Kerri’s Cure within three hours of tapping them. “It was a huge success in our minds,” he said. “There was an incredible turnout, and incredible generosity.”

The morning of Jan. 29, Matt, his family and close friends held a closed service to remember Kerri. “He definitely feels like he got lifted up by the huge outpouring,”Jones said, “and then the speed with which it moved. He was really excited by that.”

At Forge the atmosphere was energetic and communal. “Like a proper Irish wake,” Matt said, holding his sleeping son Lance in his arms.

“To see Forge full of people, excited and drinking beer, it’s heartbreaking that she can’t see all this,” said Katy Dyke, Kerri’s younger sister who drove in from Middletown, Del. “This is exactly what she wanted.”

Forge Head Brewer Rory Ricks was quick to remind people that Kerri was not just the wife of a brewer. “She’s the one who built the brewery, she was a brewery owner, she’s the reason Forge exists,” he said. “Kerri was also one of the sweetest and most wonderful people I’ve ever met. She was giving and so strong, quietly strong.”

One of Matt’s friends and neighbors Josh Rolando attended the tapping in support of the Roses. “Matt’s been so good,” he said, “for a single father, whose wife was pregnant, with Stage IV cancer. He’s done better than I think I ever would. He’s throwing himself into things he knows: the brewery and his son.”

Kerri and Matt’s son Lawrence “Lance” was born two months premature so she could begin chemotherapy. After that was unsuccessful, she began immunotherapy. Lance has been a healthy and otherwise normal baby.

“Kerri worked extremely hard,” her sister Katy said. “She was always an overachiever. We call Lance the overachieving baby.”

Kerri’s Go Fund Me page where she posted about her experience is online at www.gofundme.com/daywalker.