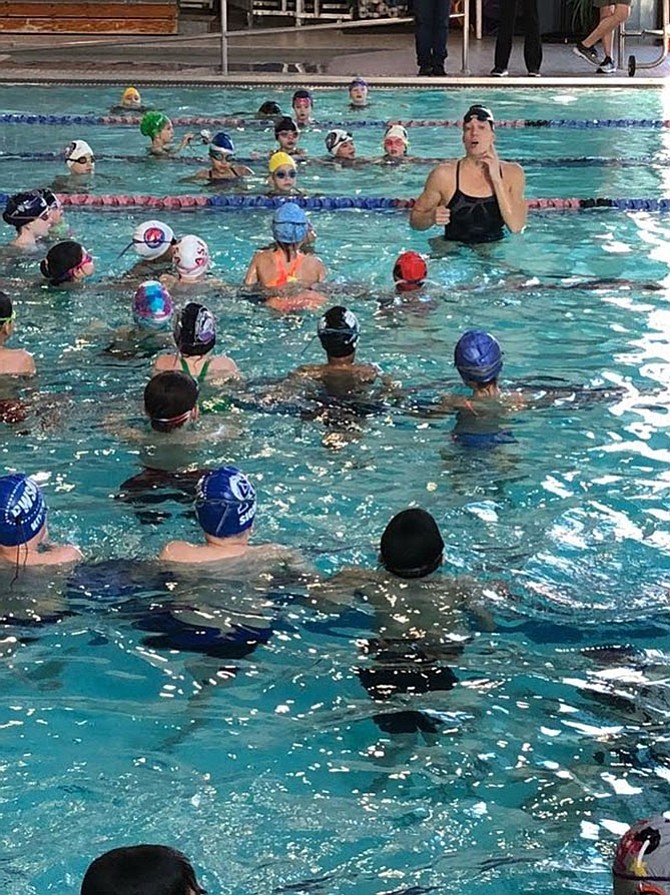 In the water, everyone is equal.

Last weekend at the Chinquapin Park Recreation Center and Aquatics Facility, two swimming champions hosted three age-based swim practices. Much of the weekend was spent honing young swimmers’ techniques, like streamlining bodies in the water and perfecting turns. Subtle changes in each turn and each stroke can shave crucial seconds off of a swimmer’s time. But beyond that, Amanda Weir and Austin Surhoff said the weekend was about teaching youths not to be intimidated by more experienced or more lauded swimmers.

Weir is a three-time Olympic champion with four Olympic medals to her name. She is a world champion and former world record holder. Surhoff is a national champion. But when they get in the water with the youths, they’re just people.

“In the pool, everyone is on an equal playing field,” said Weir. “We all [practice] and I look at this as an extension of that. What we do is not that different than what they do.”

Surhoff said meeting with young swimmers and sharing stories about some of the personal challenges on their path to success can help them relate and understand that champion status isn’t predestined or unachievable.

“Things like this make the path more digestible for them,” said Surhoff. “I don’t ever want them to be intimidated by someone like [Weir] or me when they come up against us in a race.”

Many of the students walking out of the ages 13 and up class on Feb. 4 said they were particularly thrilled to find specific aspects of the class they were able to take away and apply to their own training.

“It was fun and informative,” said Erin Althouse, who learned about the program through her swim team, the Potomac Marlins. “I learned to streamline my kicks. I liked learning to do the butterfly stroke, which was what I really needed to work on. It was very cool.”

“It was really fun,” said Katie Vastola, “It was a great experience. The Q&A was my favorite part; we got to talk with someone who has been to the Olympics. And we learned new skills and some new tips that will really help me.”

Weir and Surhoff both said their favorite moments in these practices is being able to visibly see the students improve and gain confidence over the span of just one training session.

“I love seeing the lightbulb moment for these kids,” said Weir. “When it connects, and then they nail it, you can already see them improving.”

“My favorite part is really being able to impact these kids,” said Surhoff. “Swimming practice is generally a slog, but here we got to help sharpen up the details [of their technique].That’s not usually something that’s the focus of a lot of swimming practice at their age, which is a shame.”