McLean Neighbors Move to the Next Level
Votes

McLean Neighbors Move to the Next Level

Two McLean next door neighbors win Gatorade Player of the Year and will play D1 sports. 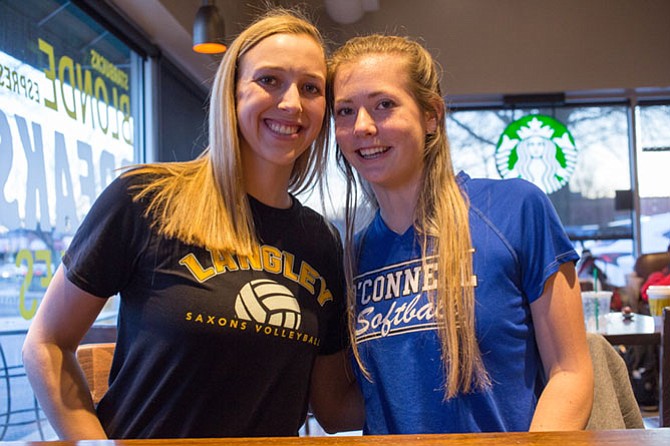 From left: Elena Shklyar, senior at Langley High School and Katherine Sandercock, senior at Bishop O’Connell High School, both from McLean, pictured after winning the Virginia Gatorade Player of the Year Award in their respective sports.

Two McLean high school seniors have lived next door to each other their entire lives. Both students were recently recruited to play Division One college sports, and both girls won Gatorade’s Player of the Year in Virginia for their sport: Elena Shklyar is the second volleyball player to win this distinguished honor at Langley High School and Katherine Sandercock is the third Gatorade Player of the Year to be chosen from Bishop O’Connell High School.

“It was never barbies, it was going outside and playing,” said Shklyar.

Shklyar admits to being athletic, driven, and extremely competitive, as does Sandercock. This mindset is what drove them both to win an award like Gatorade’s player of the year in addition to keeping upstanding grades in school.

“I’m ultra-competitive,” said Shklyar. “We’ve been getting our work done on the road our whole lives and this will help us in college. Gatorade takes into consideration your school and the community,” she said.

PARENTS also play a role in helping their children achieve their athletic goals, and their role was central with Sandercock.

“My dad built a pitching facility in my backyard. That’s huge because I don’t have to drive forever to practice. My dad and mom have both sacrificed so much for me. If they didn’t know how to do something to help me, they would learn it,” said Sandercock.

Sandercock was recruited last summer to play on the Women’s Junior Olympic Softball Team, and is hoping to compete in the 2024 Olympic games as a softball pitcher.

“Having someone next door doing well in their sport is great,” said Shklyar.

And friendly competition from an early age is what drove both of these girls to achieve their childhood goals of competing on the most competitive college level in the country.

“Both of my brothers played sports, but I’m the only one who will play in college,” said Shklyar.

Sandercock comes from a sports family. Her father played Division three baseball, and her grandfather was a minor league baseball player. Sandercock also had an older sister who was a competitive cheerleader.

“I’m excited and ready to work harder. Also being surrounded by players who are on that level of competition and getting to talk to the older players is great. I want to step up into that leadership position in college,” said Sandercock.

THE VIRGINIA STATE Gatorade Player of the Year Award was a great honor to Sandercock and Shklyar for their athletic achievements, but also for their work as students and as people, as the association focuses on the whole player.

Trish Sandercock was excited about her daughter’s hard earned success and recent admission to Florida State University. “When you know you’ve got somebody special back in eighth grade you start looking early. And when you’re in that world you just kind of know which schools are the best,” she said.

Shklyar is also ready to move on from Langley High School after graduation.

“It’s big 10 Volleyball at Michigan State. I love the atmosphere. They have huge school spirit!” she said.