Too Big To Fail in Arlington
Votes

Too Big To Fail in Arlington

Despite concerns about project size, townhouses at 11th & Vermont are unanimously approved by Planning Commission. 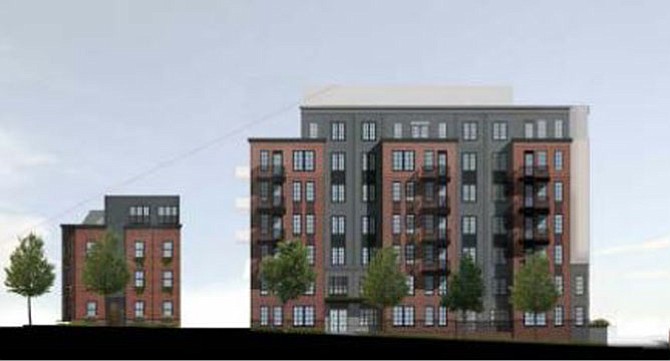 According to nearby residents, and several members of the Planning Commission, the project at 1031 North Vermont St. has three problems: it’s too big, it’s too high, and it’s too close. At the Feb. 12 Planning Commission meeting, the project was the only item on the docket, but testimony from concerned local residents and proposed alternative solutions from the commission still stretched the debate over the project out for hours. But when the dust settled, despite the commission’s concerns, the project was unanimously approved with conditions and passed on to the County Board.

The subject of discussion were three items associated with the property listed as 11th and Vermont. One was an amendment to change the project from low-medium residential to high-medium residential, another changing the zoning from two family dwellings to multiple family dwellings, and a site plan for 72 units of multi-family condominiums and townhouses. The new building will be seven stories tall with a 22 foot and eight inch separation from the abutting Westview Condominium Building. For many residents of Westview, as well as the Ballston-Virginia Square Civic Association and Westview Condominium Association, it’s too tall and too close for comfort.

Planning Commission member Nancy Iacomini said she had concerns about the precedent the new building would set for the area. Iacomini filed a motion for the tallest building to the limited to six stories and a motion for at least 30 feet of separation from surrounding neighbors.

“There has always been embedded in this project the fatal flaw of being taller than six stories and the building separation,” said Iacomini. “No amount of improving the surface really gets to that.”

The motion to limit the building height to six stories failed, but the motion for 30 feet of separation passed. Another motion was proposed to direct county staff to provide additional opportunities for neighbors in adjoining properties to continue working with developers on a neighborhood list of issues, including pedestrian circulation and opportunities for open space, but others said this fell outside of the scope of work expected of county staff and the motion failed.

“It had been my intent not to vote for project,” said Iacomini, “but after my amendment was accepted, it would be churlish of me not to.”

The project was unanimously approved by the Planning Commission and will go to the County Board for final approval.